﻿﻿﻿I was recently given the chance to review some ‘Pyjama Cupcakes’ from BabyBlooms who are the UK’s leading ‘new baby gift‘ company.

The Pyjama Cupcake gift that was sent to me was so pretty. It is a very simple idea of a pair of 100% cotton baby pyjamas rolled up into cupcake cases and presented in a beautiful gift box. It is a simple idea but it makes a big impact!
I gave the cupcakes to my friend who is expecting a baby in a couple of months time. She was absolutely delighted with the cupcakes and she felt thoroughly spoilt to receive such an original gift.  She knew she was reviewing them for My Mummy Reviews so she set about the job of undoing the bow and dismantling the adorable cupcakes so I could get a photo of the pyjamas after they had been removed from the cupcake cases.
The pyjama set is not cheap at £14.99 but it is well worth the money. The pyjamas seem to be very good quality but more importantly than that, the gift is so unusual that the recipient will really be stunned to see that the cupcakes are in fact pyjamas. I’ll admit…I did slightly force my friend to dismantle the cupcakes! I think she would have been perfectly happy to display them as they looked so cute but I was far too intrigued about how they would reveal themselves as baby pyjamas to let her do that!! 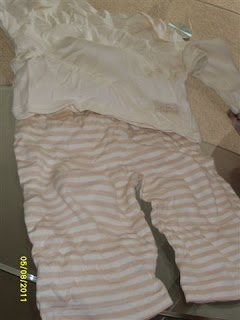 As you can see from the photo the pyjamas do end up being all misshapen but according to the box and also other reviews of this product on the net, they should return to their original shape after being washed in the machine.

The cherry decorations on the pyjamas are only for display purposes and I’m pleased to say they are removed really easily by just pulling them off.  They didn’t leave any marks like I thought they might. If you were in a really sentimental mood you could stick these cherries in your child’s memory book to remind them of the lovely gift you received when they were born.
The Pyjama cupcakes can be bought in a choice of colours. I received the neutral set to review but you can also buy pink and blue. I know some people don’t like all the ‘Pink for girls and Blue for Boys’ but I am not one of those people. When I first found out I was having a girl I went straight out and bought lots of pink. I also bought polka dots and floral prints but pink was the first thing that came into my head when I was told I was having a girl. Therefore I am very pleased to see that BabyBlooms offers not only neutral colours but also the quintessential boy and girl colours too. 🙂
I think if you are looking for a special gift for a new mum then you can’t go far wrong buying something from BabyBlooms. I have looked through the site and they sell so many lovely things. I think by far my favourite item on the website has to be the luxurious Baby Clothes Bouquets that they sell. They are stunning! At a glance they look like a normal bouquet of flowers but then when you look closer you can see they are actually baby clothes hand-folded into flowers and flower buds. How amazing is that!  The prices for the flowers vary but the cheapest is £3.95 for one pair of socks folded into a single flower and then the most expensive is £70 for the ultimate bouquet which you can see in the photo below. The ultimate bouquet contains 1 x reversible hat, 2 x long sleeved sleepsuits, 2 x bodysuits, 1 x Pair of scratch mittens, 2 x Bibs, 2x winding cloths, 4 x pairs of socks and a selection of velvet leaves, silk foliage and delicate silk roses and freesias.  Wow! I wish someone had bought me one of those bouquets when I had my daughter.  I would have been speechless….which wouldn’t have been a shock to everyone as I am forever talking! As I’m sure you can guess by the amount I write on My Mummy Reviews. 🙂