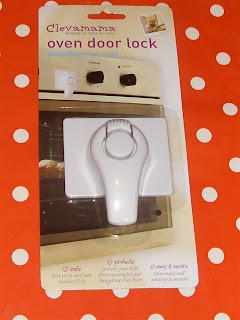 I was sent an Oven Door Lock to review by Clevamama but unfortunately it didn’t fit the oven that I have. Thus this is not really a review…more of an informative feature.

The Oven Door Lock can be bought from Kiddicare at just £3.25 so it isn’t all that expensive. It seems to have varying reviews over the net.  Most people say that it does it’s job of stopping little one opening the cooker door but there are the odd few who say that once the cooker is hot the sticky adhesive can melt and then the lock falls off.  Like I said before…I can’t say whether or not this is true as I have not been able to test the lock on my cooker.  I would say that if you did buy this and have an issue with the adhesive coming off when the oven heats up that the best thing to do would be to contact Clevamama themselves as I’m sure they would be able to help you.

It is a shame that this wouldn’t fit my cooker as it sounds like a really useful product. The reason it wouldn’t fit it because I have a grill with a pull down door just above my open out oven door. There is no space between the bottom of the grill door and the top edge of the cooker door…this means there is nowhere to stick the oven door lock. The only place I could put it is on the bottom of the grill door but then the piece that is supposed to hold the door shut will not reach to do it’s job. Also, if I put it on the pull-down grill door the likelihood would be that my daughter would then open that door and break the lock anyway.
I am a bit confused by the photo on the packaging of the oven door lock. It shows the oven door lock on a cooker with no handle to open the door with and inside the cooker are some muffins cooking. That alone doesn’t confuse me…what does is the fact that they have used the same photo of the cooker with the muffins cooking on the advert for the transparent door guard…except that what looks to be the same cooker now has a big handle across the top of the door. This would mean that they would probably have the same issue of fitting the lock as I did? There would be nowhere to fix the lock and if they did manage it I expect it would be fairly awkward to open it.  I have read lots of reviews on the net for this oven door lock and I haven’t read one that says it doesn’t fit their cooker…except mine. I’m just intrigued as to how the cooker can have a handle in one photo but not in another.
Clevamama also sell other safety products that would be great to buy when you are trying to child-proof your home. The Transparent Oven Door Guard sounds good as does the Multi Purpose Edge Guard. The oven door guard can reduce the heat on the surface of the oven door by up to 50% which will then reduce the risk of your child burning themselves. It sounds like a great product.