Are you jealous of my gorgeous Christmas tree this year? I must say I do think it is rather beautiful and very festive. It is a Fraser Fir and it was sent to me for review from the lovely people at Catsfield Christmas Tree Farm.  I was sent a Christmas tree in a pot but I’m afraid they have already sold out of those from their site this year (2011).  They do however have lots of other non-potted Christmas trees available though.

The tree costs £32.95 which I have to be honest is more than I have ever considered spending on a Christmas tree. This is my first ever real Christmas tree and I must say I am very impressed with it. It has not shed many of it’s pine needles and it doesn’t require all that much looking after. I did get a bit too generous with the jug of water at one point and had water seep out over the floor but that was my fault. Luckily I did stand the pot in a tray and I had stood the tray on a wipe clean tablecloth. I had envisaged something like that happening anyway.:-)

When I told everyone I was being sent a real Christmas tree to review they all kept saying:-  You’ll regret it!, You’ll have needles everywhere!, Your daughter will pull the needles off! and You won’t be able to get the needles out of the carpet!  I’ll admit I was starting to dread it arriving in case they were all right.   Well I am so happy to say I have had none of those problems so far. I think some of the reason that hardly any of the needles have come out is because of the fact I got a potted tree which is still living and being fed water. Some needles do come off when you put on the Christmas tree decorations and also if you brush past the branches. I’d expect that though.  As for my daughter . . . she loves the tree! When it arrived wrapped up in it’s net she went over to it and gave it a hug! She said the greetings to it and since then has treated it very nicely. She doesn’t play with it much and she says goodnight to it every night when we turn off the Christmas lights. My tree was from the 3 – 4 ft category and therefore it is just a bit taller than my daughter.  For the last 4 years I have had a 6ft artificial Christmas tree so it is a bit of a change to now have a tree just over half the size. I think ideally I’d like a bigger tree but having said that I do like the fact the tree is the same size as my daughter as I think it makes it look more like it is her special tree. 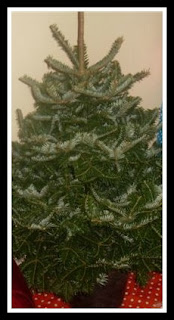 The tree has a subtle pine scent and the needles seem to be very soft. I have read on the net that some types of Christmas tree have sharp needles, but this Fraser Fir isn’t one of them.

According to Wikipedia the ‘Fraser Fir has been used more times as the Blue Room Christmas tree (the official Christmas tree of the President of the United States’s White House) than any other type of tree.’   I now feel even more honoured to have a Fraser Fir in my home. Thanks Catsfield!

You are able to choose the date they deliver the tree to you and delivery costs £4.95 on orders of under £20, it is £9.95 on orders of between £20 and £99.99 and free on orders over £100. You will receive an email when the tree has been dispatched and then it will arrive on the specified date. The delivery was hassle free and they left the tree for me in my chosen place as I was out when it was delivered.

I think the best bit about my delivery has to be the fact they also sent me a tiny baby Norway Spruce tree with my order!!!! I was gobsmacked! It’s so cute and it was sent to me so that I could plant it out in the garden or in a pot. It is such a kind thought and it definitely makes me want to shop with Catsfield Christmas Tree Farm in the future.  For every tree that they cut down at their farm they will also plant another two to replace it.   They have been Christmas Tree growers for over 20 years and they only sell the finest grade trees. That is the kind of Christmas Tree company you want to be shopping with. 🙂

You can also buy decorations, lights, hand made wreaths and Christmas tree stands from their website.

The thing I like best about this real Christmas tree is that I can hopefully keep it alive and well and bring it back in to my home next year and maybe even the year after that! How fabulous is that! Well worth the price of just under £33 when you consider the time and love they have spent caring for it so we can buy it.

If you have a minute why don’t you pop along and say hi and Merry Christmas to the Catsfield team on Facebook and Twitter.

Last date to order online to have a Christmas tree delivered is the 19th December. So you still have 9 days left to order!