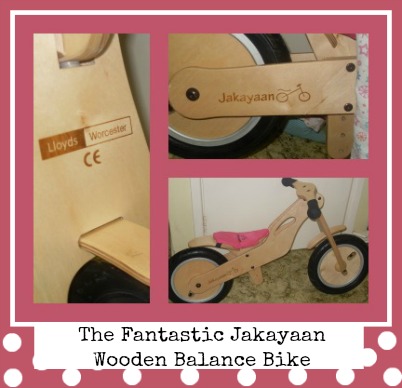 Look at this wonderful Jakayaan wooden balance bike that I was sent to road test. The fantastic team at Lloyds Worcester sent it to me so I could review it on my blog and as my niece had really wanted one I gave it to her to keep. Let me tell you…..she was over the moon with the bike and I am now a very popular auntie! :o)

The balance bike is now my niece’s favourite toy and she has used it every single day since it arrived at the end of January. She scoots around the house on it but she has also used it out and about in places such as the park and in her garden.  Her dad (my brother) put the bike together for her when it arrived and he said it really couldn’t have been any easier to make. He said it didn’t take long at all and he was very impressed with the stability of the bike. It is made to a high standard and it is very sturdy. It would make an ideal first bike for a child as it doesn’t require your child to be able to pedal. As the bike has no pedals all they have to do is get the hang of balancing and then away they go………yipee!

The bike is only intended for children who are over 2 years old (depending on their size) and who weigh up to 25kg. The bike is fairly heavy but this is definitely a good thing as it makes the bike robust enough to be handled by a child. We all know that kids like to just get off their bike and drop it to the floor. That’s not a problem with this one, it can handle it! 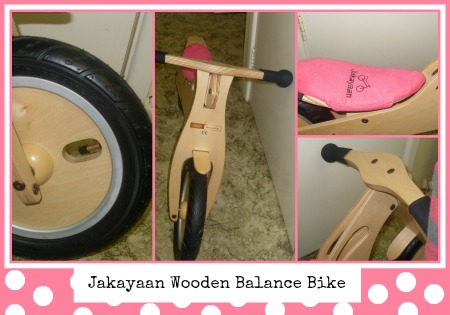 Before receiving the Jakayaan wooden run bike I had never seen a balance bike before and to be absolutely honest I was a little bit sceptical about how it could be classed as a bike if it had no pedals. Well, I’ve now decided that it may be pedal-less but it doesn’t seem to matter one little bit to a child. It is still most definitely classed as a bike as they get that same sense of freedom and independence that you get with a bike with pedals. (As always, the child must have adult supervision when they are riding it)

My niece adored the bike from the minute she got it and all her friends and their parents have admired it. My brother has already had to tell quite a few people where it came from as they had fallen in love with it and wanted to know where it had come from. You don’t see balance bikes for sale all that much on the high street so make sure if you are looking for one that you go and visit the Jakayaan website first.  A balance bike is one of those presents that is more than suitable as a ‘big’ birthday or Christmas gift. At £52.99 with free UK delivery the Jakayaan bike is a super price for such a good quality, well built bike that will grow with your child over the years because of the 4 adjustable seat heights (32cm, 35cm, 37.5cm, 40cm). The bike comes with two seat covers, one pink and one blue,  which have the Jakayaan logo embroidered on to them. My niece opted to have the bright pink cover on her seat and it looks great. The Jakayaan branding on the bike is hot stamped directly onto the wooden body of the bike. I think this is much better than the usual stickers you get on bikes which start to look tatty after just a short while.

The balance bike does not have pedals, brakes or stabilisers. Instead your child has to ride it by learning to balance their weight. They stop the bike by using their feet and they steer the bike using the ergonomically designed soft touch handlebars.  The pneumatic tyres on the bike are amazing! They provide your child with a comfortable ride and because the bike has solid disk wheels with no spokes the ride will also be safer as there are no spokes for them to catch their fingers, toes or clothes in.

After having had a chance to observe my niece with the bike, I think my personal favourite thing about the bike has to be the lack of pedals. I have a couple of reasons for this, 1 – the lack of pedals means the balance bike is better to use inside the home than a normal bike as there are no pedals to be scraped along cupboards / walls / floors etc and 2 – as there are no pedals they can’t spin round and hurt your child’s legs when they are freewheeling around the garden. I find it quite surprising to think that I like the fact the bike has no pedals, as I mentioned earlier I did think I would probably dislike that about it. How wrong I was!

The front forks on the Jakayaan bike are angled which helps to keep the wheels going in a straight line plus the bike only allows for limited steering which means that there is less chance of the wheels turning round too far and thus throwing your child off the bike. Your child should find the balance bike easy to control and once they are accustomed to riding it they will go zooming around on it , just like my niece.

The company behind the Jakayaan balance bike is Lloyds Worcester Ltd who are a small family run business who are based in Worcestershire, UK. The wooden balance bike is designed in the UK and made from solid birch plywood which is a strong, natural material which is easily recyclable. The bikes are CE certified and comply with EN571-1, EN571-2, EN572-3.

Lloyds Worcester pride themselves on having an ethical approach to business and wherever possible they try to reduce their company’s impact on the environment. Their office is mostly powered by their own solar panels and their website is hosted by a 100% solar powered server out in California. They will also let you help them to reduce their paper usage by offering you the choice of receiving your Jakayaan assembly instructions as either a printed sheet in the bike box or as an emailed PDF direct to your inbox. There is also a step by step instructional video on the Jakayaan website that shows you how to construct the balance bike when it arrives with you. You can watch the video here.

If you would like to read the story behind why Lloyds Worcester designed the Jakayaan bike please visit their about page.  I don’t hesitate for one second in recommending their balance bike to you all. My niece absolutely loves the bike and it will last her for a long while yet. It is one of those children’s wooden toys that we can all envisage will be staying in the family for years to come.

You can treat your child to a Jakayaan balance bike by placing your order here. If you want to ask some questions before buying a bike then please contact them using their contact form or get in touch on twitter or facebook. They are such a friendly team and are more than happy to answer any of your questions

I’d just like to say a few final words…….Thank you so much to everyone at Lloyds Worcester for sending me this bike to review on my blog. I really appreciate it and it is lovely to see my niece so happy with her new Jakayaan bike.

My niece still uses this balance bike to this day. She has had it since March 2013 and it still in just as great working order as when it first arrived with her for review. Since the bike was given to her she has had a little brother arrive so the bike will be used for him in the future. 🙂 He is only 6 months old though so still a long while for him to wait to use it but just long enough for my brother to try and find the blue seat cover that he had put out the way for any future kiddies.