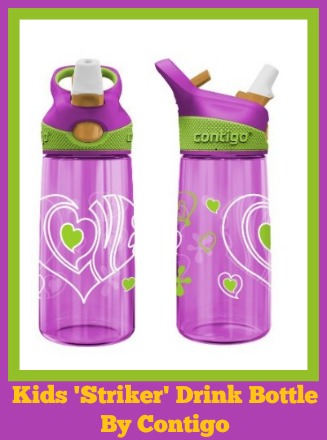 Last year I was sent a new drink bottle for my daughter to road test. It was a Contigo ‘Striker’ bottle and it is available to buy on Amazon at the moment for £15.76.  She has been using it for months and months on end and it is still in as good condition today as the day it was sent to me. The decals haven’t worn off, the spout hasn’t discoloured and it is still leakproof.

I am very impressed with the quality of the product but to be honest I am not surprised in the least that it is so fantastic. Afterall I have reviewed for Contigo before and I adore their products. Back in November 2011 I reviewed the Runabout Non-Spill Kid’s Cup and then in January 2013 I reviewed the Scout Food Jar.

Contigo’s drink bottles do have a premium price tag but to be honest they do last a lot longer than any other brand of non-spill , leak-proof water bottle I have used for my daughter. She is still to this day using the Contigo Runabout bottle from back in November 2011.

The ‘Striker’ drinks bottle is fun and vibrant. Kids will love using it for their drinks and they will be more than happy to be seen drinking from it. It is not all babyish because it has a sippy spout – in fact I think it’s rather cool and grown up! I’d like one too.

The only issue I have encountered with it is that sometimes when the drink bottle has been carted around in your bag for a while the water can end up in the spout and then when you open it the water can squirt out. It’s not a huge problem but it is something your child will rather quickly learn to be aware of. All they’ll do is make sure they open the bottle away from them!  Unless of course it is a hot day and they want to be squirted with water. :o)

To me the most impressive thing about this bottle is the fact it doesn’t leak when it is laying in your bag. It goes without saying that it’s always best to keep your drink bottle upright but as we all know this advice isn’t very likely to be listened to by your child. When they are taking their bottle with them to school it’ll be chucked in their bag along with everything else!

My daughter loves the design of her ‘Striker’ bottle and she is more than happy to take it with her wherever she goes.

Here are the features of the Contigo ‘Striker’ bottle :- 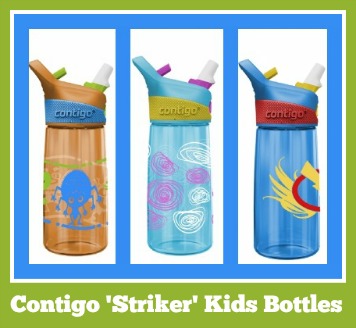 The bottle is currently available in 4 different designs. There is Pink Love which is the design my daughter has (it is shown in the photo at the top of the page), Orange Gremlins, Turquoise Squiggles and Blue Bolt. If you hand wash the bottles, like I do, the designs will stand the test of time. Although I’m afraid I cannot vouch for how well they will last if put in the dishwasher as I’m afraid I don’t have one myself.

All in all I would recommend this Striker bottle to you and I would also ask you to consider the Runabout bottle too as it is also a fantastic kids drink bottle. I wouldn’t want to be without my Contigo bottles.