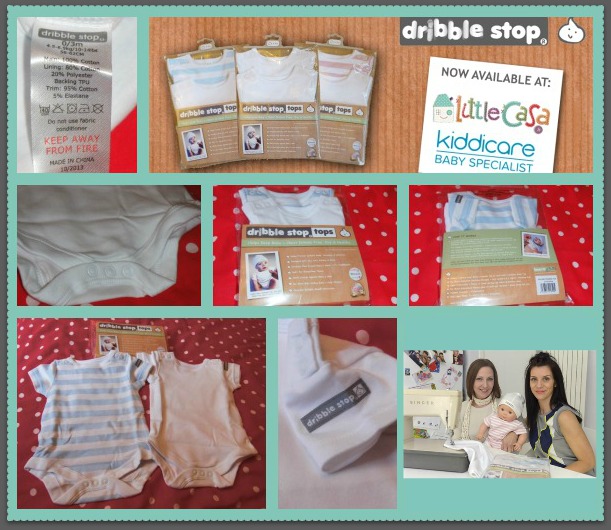 When I found out that my sister-in-law was expecting a new baby I set about sourcing lots of review products for her to put through their paces when little one was born.  She was offered the chance of reviewing a pack of Dribble Stop Tops and she very gratefully accepted them.

You may or may not have heard of Dribble Stop Top as they are a relative newcomer to the baby clothing market but once you have heard what they are you will be actively seeking them out to buy for your own children or as gifts for friends who have new babies.

Dribble Stop Tops are a baby vest top that fastens at the crotch with poppers….everything sounds normal here….except it has a secret! Oh yes, a very clever secret. On the inside of the chest panel is a hidden pocket of waterproof material. This layer of waterproof material isn’t visible on the front of the vest and neither is it irritating to baby’s skin. You might be thinking, why is it there? Well, the reason for it being there is to protect your baby’s delicate skin from their dribbles. If you have had a dribbley baby you will know that the Dribble Stop Top is a genius idea! Little babies and young children dribble a lot and this can mean changing a lot of clothes and bibs…..constantly! However there is an alternative, the innovative Dribble Stop Top from 2mumsltd. These will be so useful if your baby dribbles a lot or if they are teething.

The top was 3 years in the making and the inventors of the garment, Tracy Wilson and Emma Brown , have spent endless hours finding just the right kind of waterproof fabric to make the tops with. It needed to be able to withstand constant washing and tumble drying and still remain waterproof. In the end they managed it and were able to launch the fantastic product and bring it to market. Yippee! 🙂

My sister-in-law was sent a pack of boy’s Dribble Stop Tops and they retail at £13.99 for a set of 2 Dribble Stop Tops. In the pack she got one white top and one blue striped top.  These are tops are also available in a girly pink colourway (one pink stripe and one white) or a unisex pack of two white tops. My sister-in-law opted for a pack of 2 x 0-3 months tops but they are also available in the following sizes :- 3-6 months, 6-9 months, 9-12 months, 12-18 months and 18-24 months.

The tops have been well and truly tested by my little nephew and my sister-in-law was very impressed with them. She says they washed and dried really well and she found them really useful for when he has his bottle feeds . She says that he has a tendency to dribble the milk and when he has the Dribble Stop Top on she doesn’t need to worry about him getting a damp, clammy chest from the milk.

Before I gave her the tops for review I did remove them from the pack so I could take some photos of them for the photo collage that you can see at the top of the post. I have to say that I thought they were extremely soft and such a fantastic idea. I wish they had been around when my daughter was little! 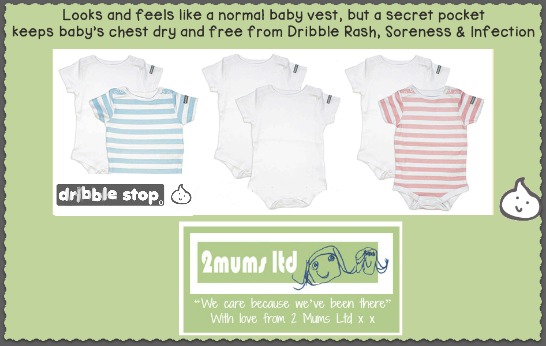 If you would like to buy a pack of Dribble Stop Tops then you can order them online from their webshop. There is currently a promotion running where if you use code Facebook10 you will get a 10% discount – meaning the tops will only cost you £12.59! I don’t know how long this code is valid for so you’d best get your orders in now! 🙂

It would be wonderful if you could stop by and say hi to the Dribble Stop Top team over on their social media accounts. You can find them on Twitter and Facebook They are such lovely and down-to-earth people. If you read through their blog you can see how dedicated they are to their brand. It is very obvious that they are passionate about helping to make parents lives easier by bringing to market an item of baby’s clothing that will really make a difference in day to day life with a baby or toddler.

I would like to take this chance to say thank you to Tracy and Emma for sending us these tops and to also congratulate them on their latest achievements….. getting silver in their Bizziebaby review, being finalists in the ‘Best Working Parent Blogger Award’ and for being selected as finalists in the Baby London Best New Product Award (in association with Nursery Industry awards).

1 thought on “Review Of Dribble Stop Top – The Baby Vest That Keeps Their Chest Dry When They Dribble!”