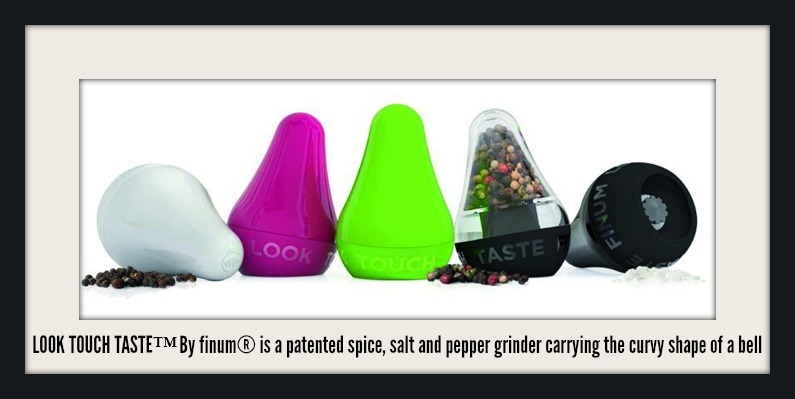 You can’t beat freshly ground pepper from a pepper mill! The look of the speckles of brown on your freshly mashed potato and the taste of it adding a kick of heat to your food. The only thing missing is the touch of sprinkling it over your food. With a normal pepper mill you just grind the pepper all over your food but with the Look Touch Taste grinder from finum you get the opportunity to also touch the freshly ground pepper as it has a patented collecting pool that collects the ground pepper so you can either get a pinch of it to put on your food or you can place it wherever you like on your meal by just shaking the grinder bell over your plate.

I was recently sent the Look Touch Taste pepper grinder from finum to review on my blog and I love how it grinds down the pepper and then collects it so you can add it to your food.  You could of course just grind the pepper directly over your food , should you wish, but I prefer to see how much pepper I am adding to my food. …..and in my case it is a lot! The more the better to be honest. 🙂 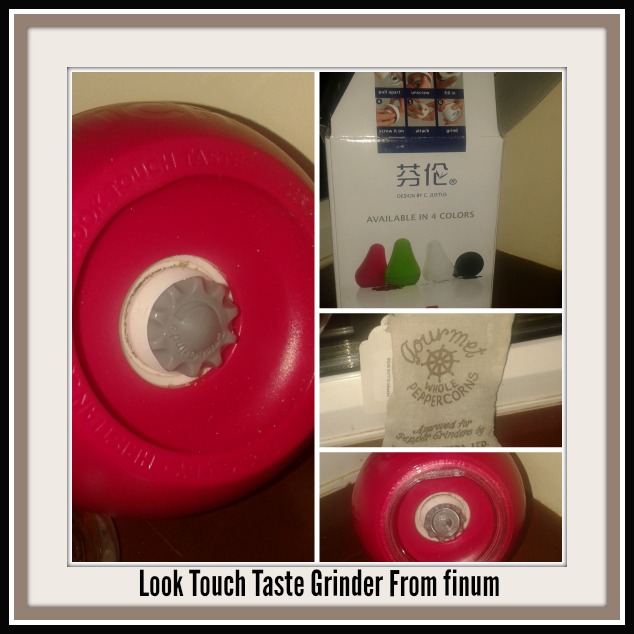 It is a very unique shape for a grinder as it is not your usual pepper mill shape but instead it is bell shaped so that it incorporates the collecting pool into the base and conceals the peppercorns in the top.

The grinder is not only for pepper but also for salt and spices. I have not tried it with anything other than pepper though as I was very kindly sent a bag of gourmet peppercorns with the grinder and so filled it up straight away to use it. It is available in apple green, ruby red , black, white and clear.  I was sent the ruby red one but I would personally describe it as more of a deep magenta pink than a deep red hue. I say this because my whole kitchen is filled with reds of every colour but this does stand out as being quite pink amongst all my red kitchenware and accessories. 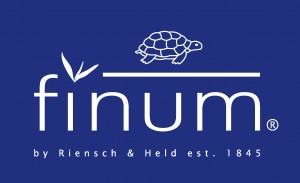 I have given the pepper grinder to my mum as she too loves pepper on her food and I thought the ergonomic design of the finum grinder would be easier for her to use than a standard one.   She likes the innovative design on the bell grinder and there is no getting away from how well the ceramic grinding mechanism grinds down peppercorns with ease. It really does make the task of having freshly ground pepper easily achievable and finum say that the ceramic grinder mechanism has passed a durability test equal to 200 years usage in a normal household.

This grinder has recently won the Interior Innovation Award 2014 and also the Good Design Award. I am not in the least surprised that the finum Look Touch Taste grinder bell has made an impact in the design world as it really is innovative and useful but also very design-led because of the unusual shape and glossy colours.

This grinder would make a great gift for a #foodie this Christmas. If you know what colour their kitchen is then you could buy a suitable hue but if not I would recommend the clear one with black base as it is modern in design but still traditional because you can see the peppercorns. The grinder comes in a box so it will be easy to wrap it up in Christmas wrapping paper 🙂

The grinder has an RRP of £24.95 and it can be bought online from Loose’s Cookshop.