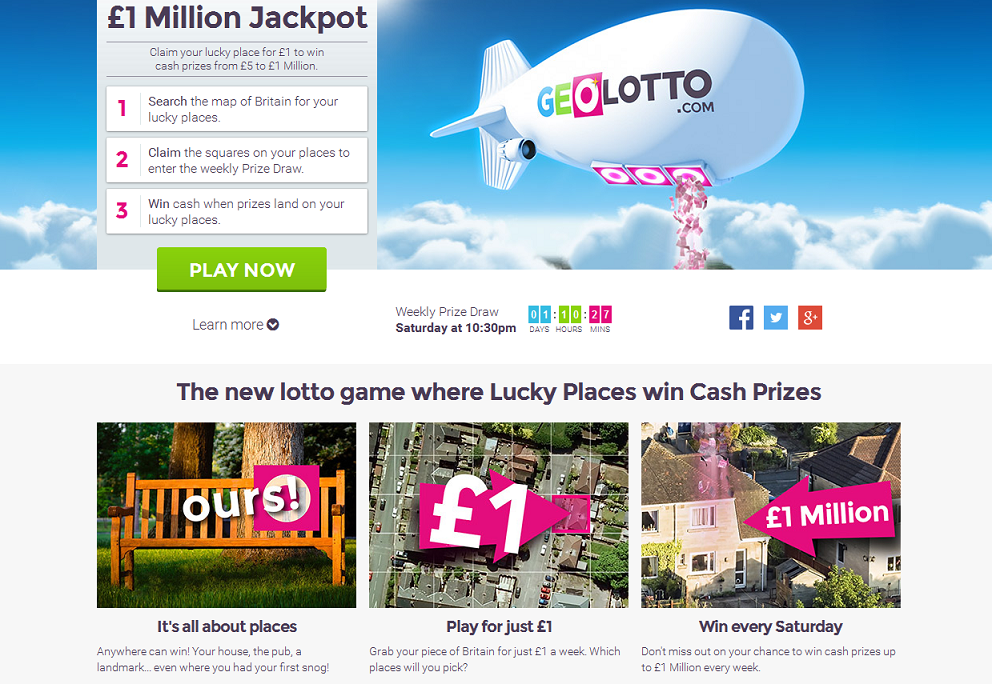 Have you heard of GeoLotto? It’s the new lotto game where Lucky Places win Cash Prizes

Back in November I was sent a £20 complimentary credit so that I could test out the new lotto game for a review.

Registration was very simple and once I had logged in I could decide where to spend my ‘review money’. I opted to spend the whole £20 on picking squares on the map as I was tempted by the big prizes! 🙂  “There are loads of cash prizes to be won with GeoLotto. As well as the £1M Jackpot, there are 15 chances to win £100K and 100 chances to win £10K – and that’s just the top 3 tiers. In total, over 2 million prizes land all over Britain every week. That’s more than £17 Million to be won anywhere in the country.”

The GeoLotto draw takes place every Saturday at 10.30pm and the results are announced on the site at 11pm that night.  If you are a winner you will be sent an email to let you know the good news. You can also check the results page after each draw for a breakdown of the latest Winners and prize locations.

The prize money will be paid directly into your GeoLotto account – unless you win over £5000 – then you’ll need to claim it. No hardship there though… who wouldn’t want to log in to claim a win of £5K or more! 🙂 If you win a big amount like this , for extra security, the money will be paid into your bank account via bank transfer. 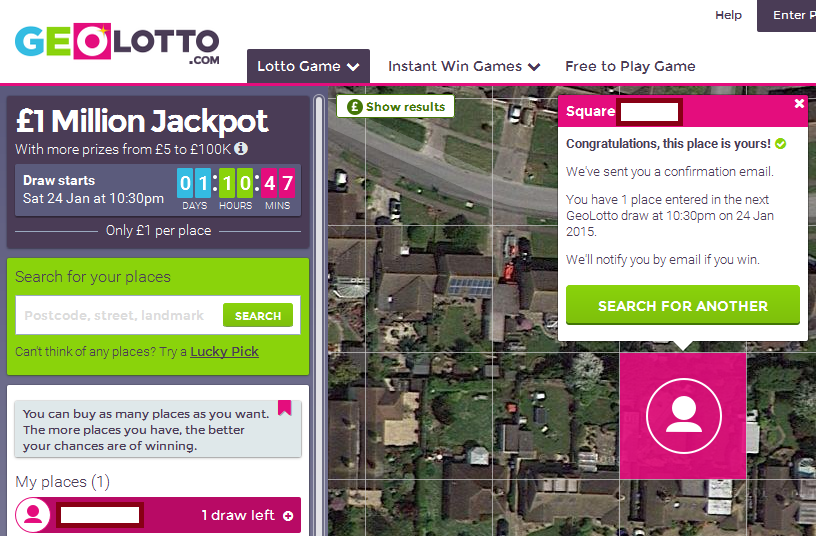 Each week there are loads of big money winners and I have to say from a personal point of view I love seeing the visual representation of where the money landed on the map…. it makes you realise just how randomly located the prizes are and that there is every chance that you could be a lucky winner at some point. Fingers crossed!

Sadly I didn’t win anything with the complimentary £20 credit I was given but I thoroughly enjoyed participating in the game and would definitely play again!

It is easy to add money to your GeoLotto account using a bank card and they make it very simple for you to pick your ‘lucky square’. All you do is search for your chosen place by either zooming into the google map on your chosen area (until a square grid appears) or alternatively you can search by postcode, landmark or street name. If you really can’t decide where on the map to pick then you can use the lucky pick button which finds a square for you. You then just need to use the drop down box on your chosen square to change it to say ‘for 1 draw only’, not 4 draws or subscription (unless of course you do want those options). 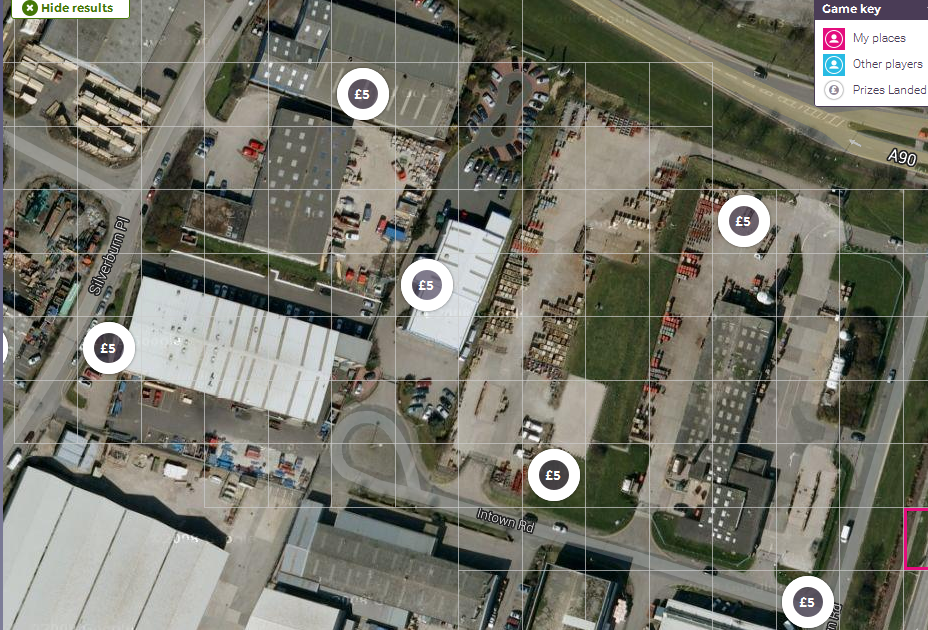 If you select ‘show results’ when you are on the map screen it will show you where the money landed last time round. So as you can see from the photo above there was lots of £5 wins in this area of the map!

You are able to pick squares to choose as your own up until 10pm on a Staurday night. They then go into the ‘Lockdown’ phase whereby nobody will be able to enter any new squares into the draw.

In the GeoLotto Draw, locations are chosen at random to win cash prizes. To ensure complete fairness they use a Hardware Random Number Generator. The process is certified by the Gambling Commission, and it says that it complies with the highest requirements of randomness set by METAS, the Swiss national organization in charge of measurement science, testing and compliance. 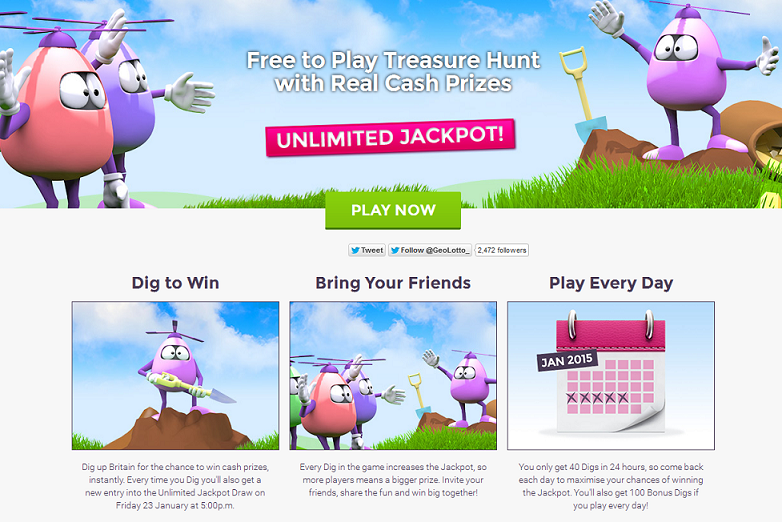 You will be pleased to hear that there is also Instant Win games on the GeoLotto website. In fact there are 7 Instant Win games that you can pay for (starts from 5p a turn up on the Doug’s Adventures game up to £2 a turn on the Turbo Treasure Hunt game) and there is even a free to play game!! I am a fan of Instant Wins as they can normally be played quite cheaply (such as the 5p one) and I don’t have to be patient and wait for a draw to take place. Plus I get the instant knowledge of whether I’ve been lucky or not.  With all the GeoLotto Instant Win games the process involves digging up a square to see if you have found a cash prize treasure beneath it – once someone has found the maximum jackpot the game then doesn’t allow you to play it. So for example today I couldn’t play the Doug’s Adventure 5p game as someone had the won the prize of £34 however I could play the Doug’s Adventure 10p game as the jackpot hadn’t yet been dug up. 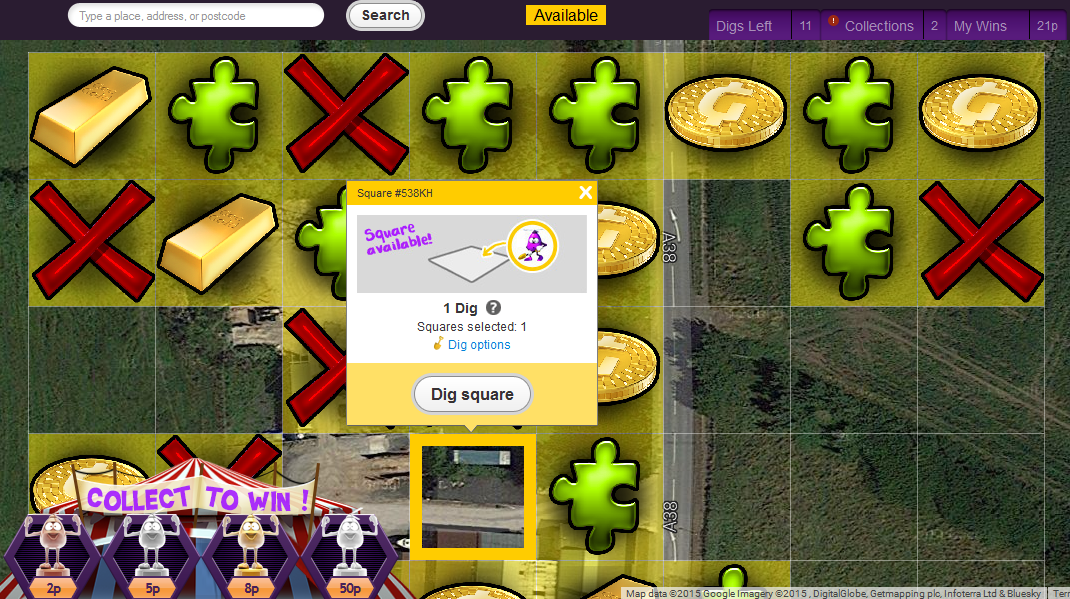 On the Free To Play game I got to dig up 40 free squares and I won 24p. …which then got spent on a couple of turns on the 10p game.You can play the Free game on a daily basis (free digs are allocated each morning at 10am and must be used within 24 hours) and if you do indeed use your free digs every day – you will even be rewarded with extra bonus digs on the last day!  Plus every time you dig on the free game you will get a new entry into their Unlimited Jackpot Draw on Fridays. So my entries have gone into tonight’s Unlimited Jackpot Draw which is at 5pm. It says on the website that every Dig in the game increases the Jackpot, so that means the more players taking part – the bigger the prize. It all sounds good to me. 🙂

When I logged into my account today for me to write this review I saw that I had been awarded a £5.40 bonus! I’m not quite sure what the reason was behind it but either way… I loved spending the bonus money. I could only spend 40p of it on Instant Win games (which I did …as I mentioned earlier) and then the other £5 I spent on picking squares for tomorrow’s draw….so if you see that my blog doesn’t get updated for a long time it could be that I’ve won the 1 million jackpot prize and me and my family have all gone off on a cruise! 😀 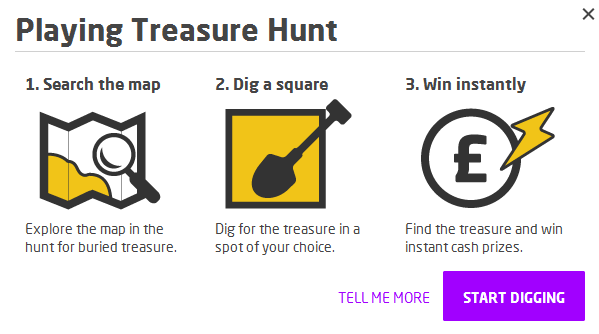 GeoLotto offer have a good ‘refer-a-friend’ bonus offer whereby you can invite a friend (by email) to join and if they do become a member and spend £4 within 30 days of registering – you will be awarded £4 bonus cash! (Please note that this is correct at time of publication and may be subject to change)

Please note that I do advise you to be Gamble Aware and to gamble responsibly if choosing to use GeoLotto. Please only spend money on playing the lotto draw if you have the funds to do so.  You can read all the terms and conditions of the GeoLotto draw here.

You can also keep up to date with their latest promotions by following them on twitter or liking them on facebook.