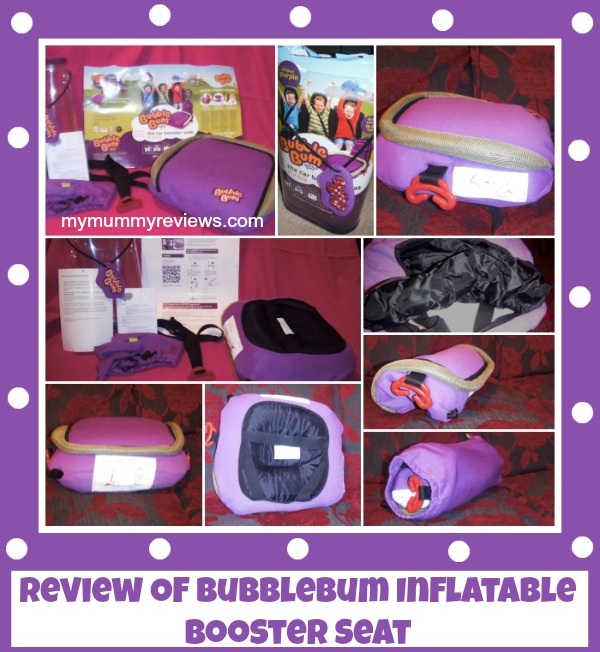 Back in May 2014 I was sent a BubbleBum inflatable booster seat to review. At the time I knew it would be handy but not as much as it actually has been!

Since receiving the inflatable BubbleBum booster seat my daughter has used it loads of times. It is such a compact size when it is deflated that you can literally pop it into your large handbag / kids school bag or just carry it on your wrist. It is so different from a normal solid booster seat in that aspect. A normal booster seat is a complete pain to try and transport places. I have been on a long bus trip to visit relatives before and the whole trip I could be seen carrying a big polystyrene booster seat….wish I’d had the BubbleBum back then!

The BubbleBum is £29.99 including postage which I think is a reasonable price to pay for this quality bit of kit! It is the world’s first inflatable car booster seat and so because of that innovation and the fact that it is just so light-weight and portable, I think it is okay for us to be expected to pay a bit of a higher price than a normal booster seat.  However at the moment you can use discount code HONESTMUM1 on their website and get 25% off . This makes it £22.49!  (Please note I do not know when this code expires. It is working as of 04/03/15)  This code is from the Honest Mum blog as they too have reviewed the BubbleBum. You can read her review here.

The BubbleBum is suitable for children who weigh between 15 kilos and 36 kilos (roughly 4 years to 11 years).  It inflates in just a few of seconds of you blowing into the valve and then it can be deflated just as quickly when you have finished using it.  All you have to do to deflate it is undo the valve, squeeze out the air and roll up the booster seat.  You then roll it up and pack it away again into the stretchy drawstring carry bag. The booster also comes with a removable seat belt positioning clip that you can use if you like. It helps to make the seat belt stay in a comfier position for the child.

The booster seat can be bought online but also in lots of major stockists such as Halfords, Tesco, John Lewis , Argos and Amazon. You can find your nearest stockist here. 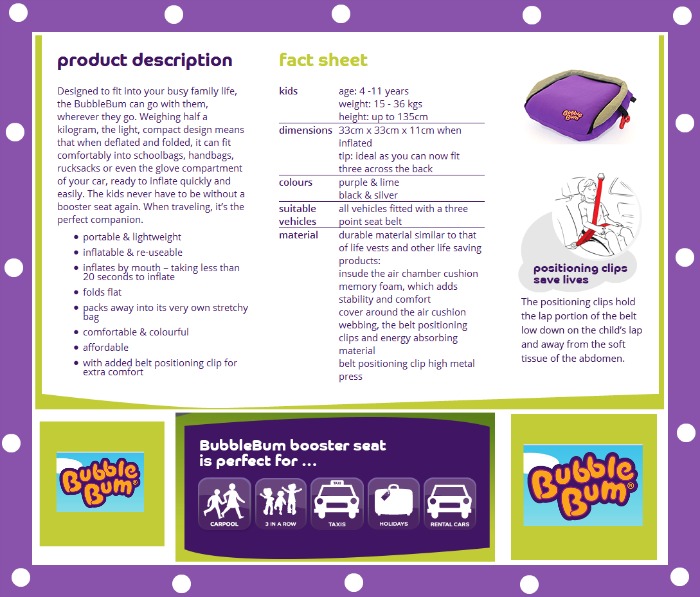 To conclude my review, I highly recommend the BubbleBum. We don’t use it on a daily basis as my daughter has a Kiddi Guardian Pro 2 car seat in my car (sent to me for review back in 2012) but we do use the inflatable booster seat at least 3 or 4 times a month.  I am sure it is perfectly comfortable for a child to use it on a daily basis though and I know that the BubbleBum is highly regarded as the best car booster seat to use in the middle seat of a car (under a 3 point seat belt) between 2 car seats.

I really wouldn’t want to be without the BubbleBum now that we have it! I love knowing that it is always there for those occasions when we are going in a friend’s car or going on holiday and need a car seat that is very portable. I think you’ll all like it. 🙂

2 thoughts on “Review Of BubbleBum Inflatable Booster Seat For Kids – Great To Take On Holidays!”