I got chatting to Ora Kitchen Towels on twitter and they offered to send my mum a ‘stack’ (not a roll) of their new ‘Round sheets’ of kitchen towel which uniquely has the feature that a sheet can be grabbed with one hand rather than having to clutch the kitchen roll in one hand and pull off the sheet with the other hand.

The stack of Ora kitchen towel sheets arrived and to say my mum was intrigued would be an understatement. She couldn’t wait to start using it and straight away when carrying out kitchen chores she started replacing her ordinary kitchen towel sheets with a circle sheet of Ora. Needed to mop up a spill? She used an Ora. Wanted to wipe the cooker top? She reached for the Ora. Anyone wanted some kitchen roll? She passed over the Ora! Until the day she was completely converted and things started to change…. 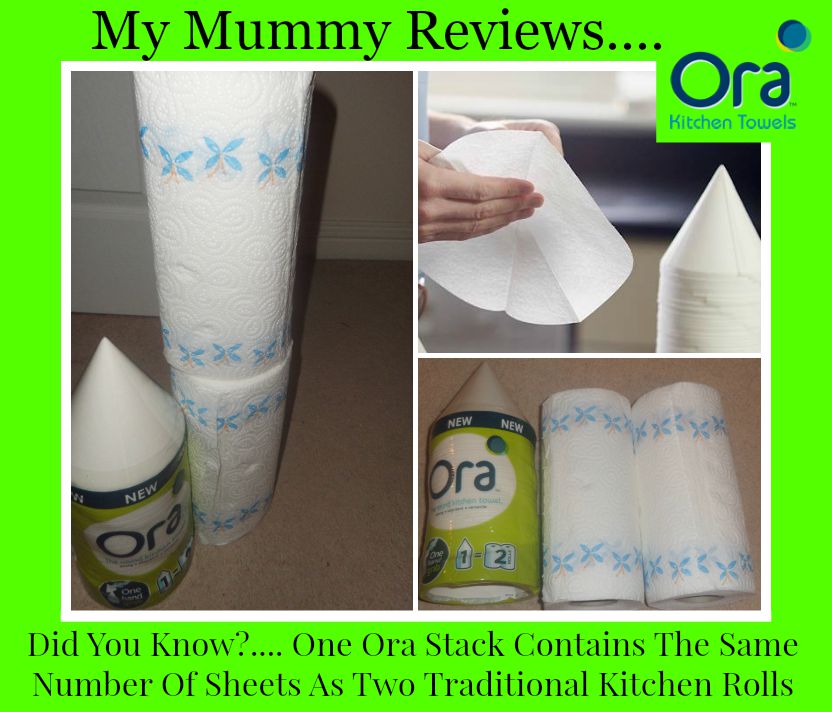 Mum no longer wanted to use the Ora for tasks that didn’t warrant it.  She had discovered that Ora was super strong, effectively wiped up spills and remained in one piece when wet.  She knew that a sheet could be grabbed in a split second should she wish (all she needed to do was grab the uppermost cone sheet of Ora) , she loved that it was superior in quality to other kitchen roll she had used and most importantly she thought it looked rather fancy standing on her worktop looking like a rocket about to blast off into space.  So now something unexpected had happened, we hadn’t realised this was going to happen … the last thing she now wanted to do was ‘waste it!’ on tasks that didn’t deserve the Power of Ora!

It had become her posh kitchen towel that she would use sparingly and I realised the problem….she didn’t want to run out of it in case she couldn’t get any more! I couldn’t blame her for the admiration she had for this new type of kitchen towel. I felt the same way. The circle sheet of Ora was perfect to use when I cleaned my glasses as it left no lint on them – which is something that always happens with cheap kitchen towel! I wash my glasses in soapy water, leave them to dry a bit and then wipe them dry with kitchen towel and get bits of lint all over my lenses…not with Ora though!  I love it!! It’s ‘Spec-tacular’!

You will be pleased to know I fixed the problem we were having with my mum’s reluctance to use her Ora once only half the stack remained (equivalent to 1 ordinary kitchen towel being left). I popped to Tesco and bought her another Ora stack for £1.90! She was happy straight away and Ora use started up again.  (Just so you know – it is available in over 1500 Tesco stores nationwide. Find your nearest stockist here)

It was used for craft (Ora encourages this and have even coined the hashtag #makewithora) – I ‘tried’ to do a 3D style drawing of my hand and my daughter did a colour wheel, it became an impromptu plate for sandwiches when we had family visiting and we had a picnic style lunch and most of all it has been used in every situation that you would normally use square sheets of kitchen towel. 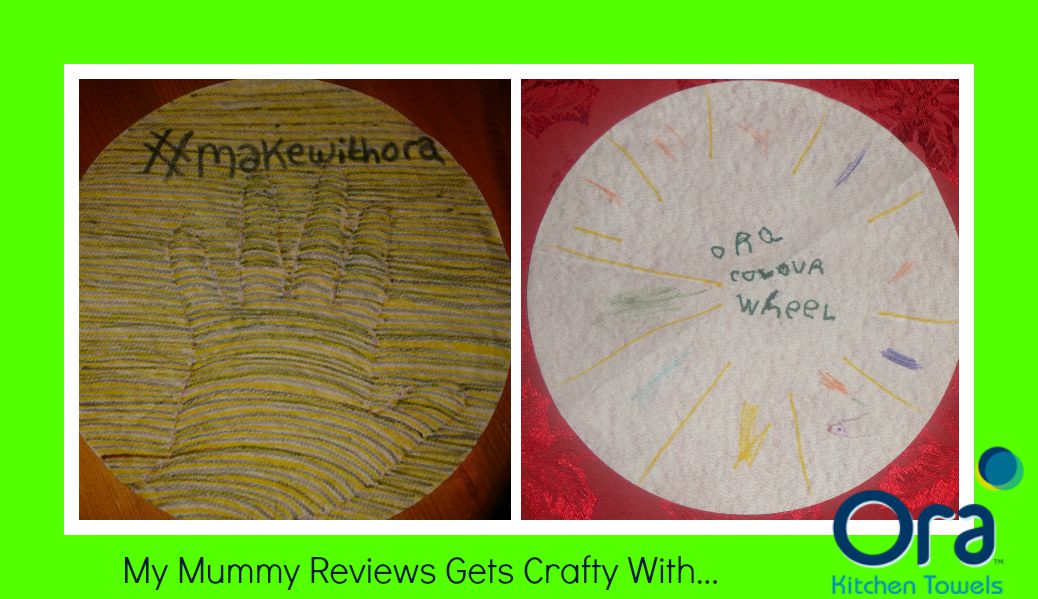 My mum truly does think that Ora is an innovation and one that she was delighted to be introduced to through my blog. She loves that it is eco-friendly (Each stack has the equivalent number of sheets of two ordinary kitchen rolls and 20% less packaging. That means 30% fewer trucks are needed to deliver Ora – so that’s 30% less pollution and congestion for all of us.) , she really appreciates the one-hand-grab feature as it makes life so much easier and she is delighted that the quality of the sheets means that Ora stays strong when used to wipe up spills. It’s a bonus that it looks rather posh standing on her kitchen work top but at first we did worry that if it got knocked over the whole tower of sheets would collapse and then our Ora would we wasted.  We decided to put it to the test and launched Ora into the sky (well, kind of!) from a kitchen stool ( see the video below – sorry the video is so dark) and all that happened was a few sheets of Ora fell off and then we picked them straight up and put them back on top. Cool! We then did the same again and dropped Ora off the table and got the same results. We were worrying unnecessarily. Ora sheets could just be picked up and placed back on top of the stack…had that been an ordinary kitchen roll it would have rolled around the floor and unraveled so we had to roll it back up again into a big kitchen roll mess!

By now you must think that here at My Mummy Reviews HQ we are slightly eccentric. I mean to be honest ,we are, but we do take the reviewing seriously and seeing all those Ora sheets stacked so nicely just made us think that it could all be ruined in the blink of an eye if the stack got knocked (or purposefully pushed!) on the floor. But it seems we were wrong. 🙂

Thanks for reading our review.