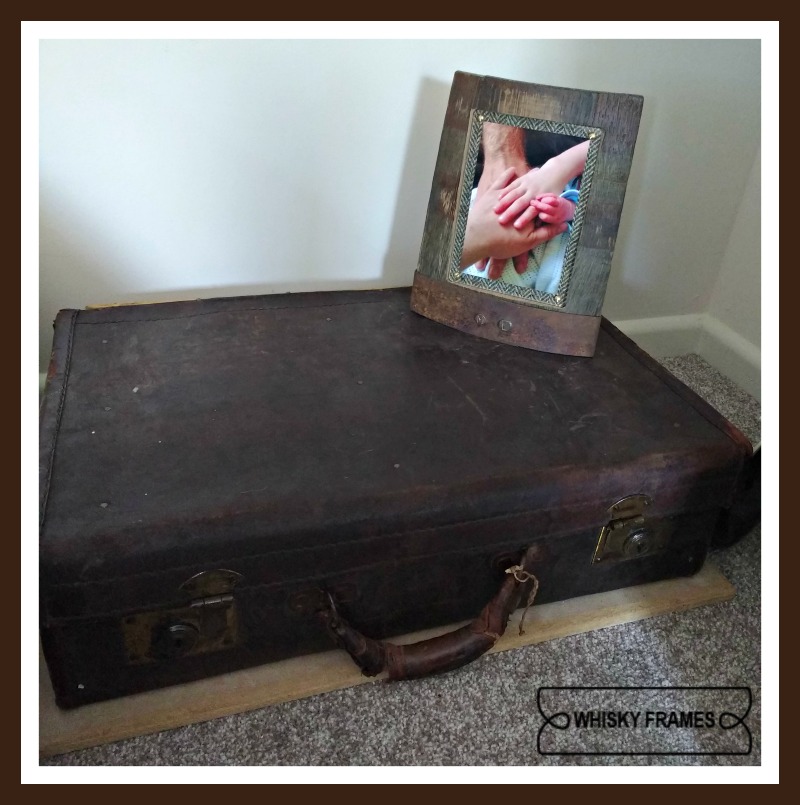 Father’s Day is exactly a month away and I’m sure you are still looking for the perfect Father’s Day Gift for Dad. Well,….. I have found it for you!   A Whisky Frame! (Please note that a Whisky Frame is also an ideal gift for a Birthday, Wedding, Engagement, Christmas etc.)

What’s a Whisky Frame I hear you ask! It is a rustic photo frame made out of reclaimed oak from a Scottish whisky barrel.

I found out about the ‘Whisky Frame’ company on twitter and as soon as I saw their amazing photo frames I just knew my brother would LOVE one. He is such a huge Whisky fan and he loves rustic style furniture so a Whisky Frame would be the ideal gift for him. I asked the company if they fancied sending my brother a Whisky Frame for me to review on my blog and I am delighted to say that they did! 🙂

The lovely Kristen and Ross at Whisky Frames kindly offered me the opportunity to pick whichever style of frame I liked from their site (there are 3 to choose from – Chime Frame, Ring Chime Frame and Bilge Frame) and they said I could even have the rivets on the front monogrammed and  a laser engraved message on the side of the frame . The Complete Works = The Most Amazing Gift For My Brother!

The day the Whisky Frame arrived at my house I was literally grinning from ear to ear and itching to take it over to my brother’s house. I had told him nothing about it – so it was a completely surprise gift – just as gifts should be! 🙂 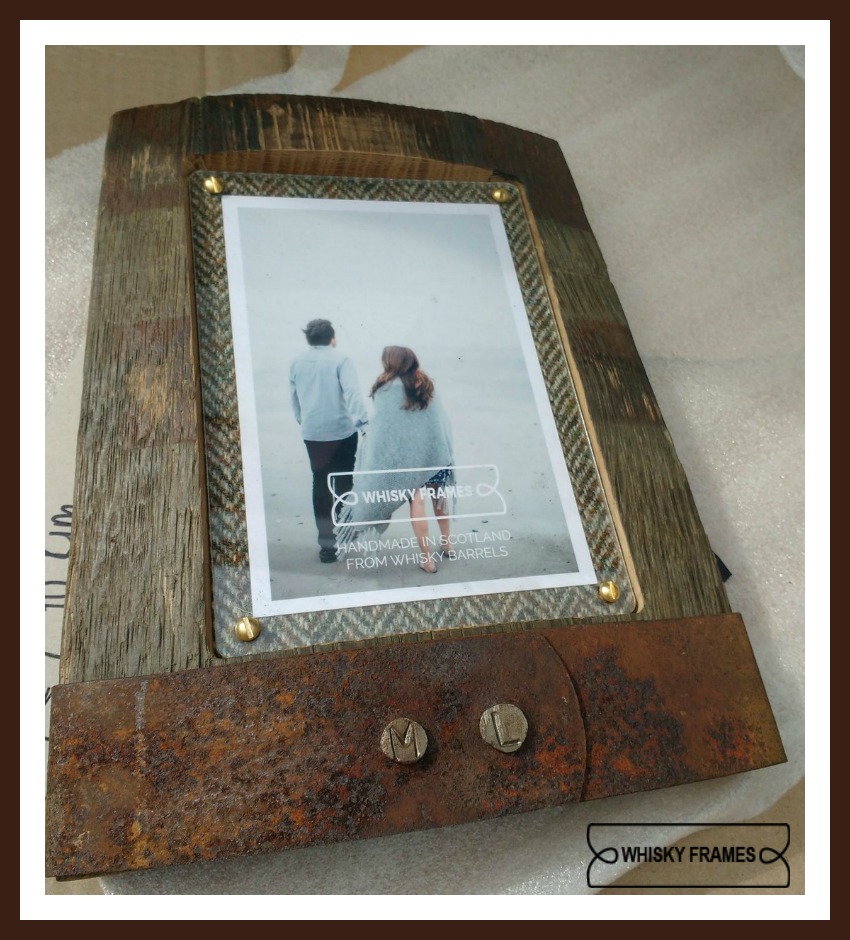 Before giving the frame to my brother I wanted to take photos of it so I unwrapped the carefully packaged frame and was completely astounded to discover that that the frame actually smells of Whisky!! It seems obvious really as the frame is made from reclaimed oak from a Whisky cask  but I just hadn’t imagined for one minute that the wood would have such a warm, rich aroma to it.  I quickly took my photos and repackaged the frame so I could maintain the whisky scent of the wood for when my brother re-opened his gift later that day. (I did however make sure to buy a small bottle of Whisky to give to my  brother, along with the frame , as I knew he would smell the whisky on the wood and it would make him want a tipple!)

I was so excited about giving the Whisky Frame to my brother as I knew he would love it so much.  I had chosen to get him the Ring Chime Frame with a Brown Herringbone Genuine Harris Tweed backing (other options are available), monogrammed rivets with his initials and a laser engraved quote on the side of the frame. I found a quote on the internet that I thought was suitably fitting…… “Whisky is liquid sunshine!” – George Bernard Shaw 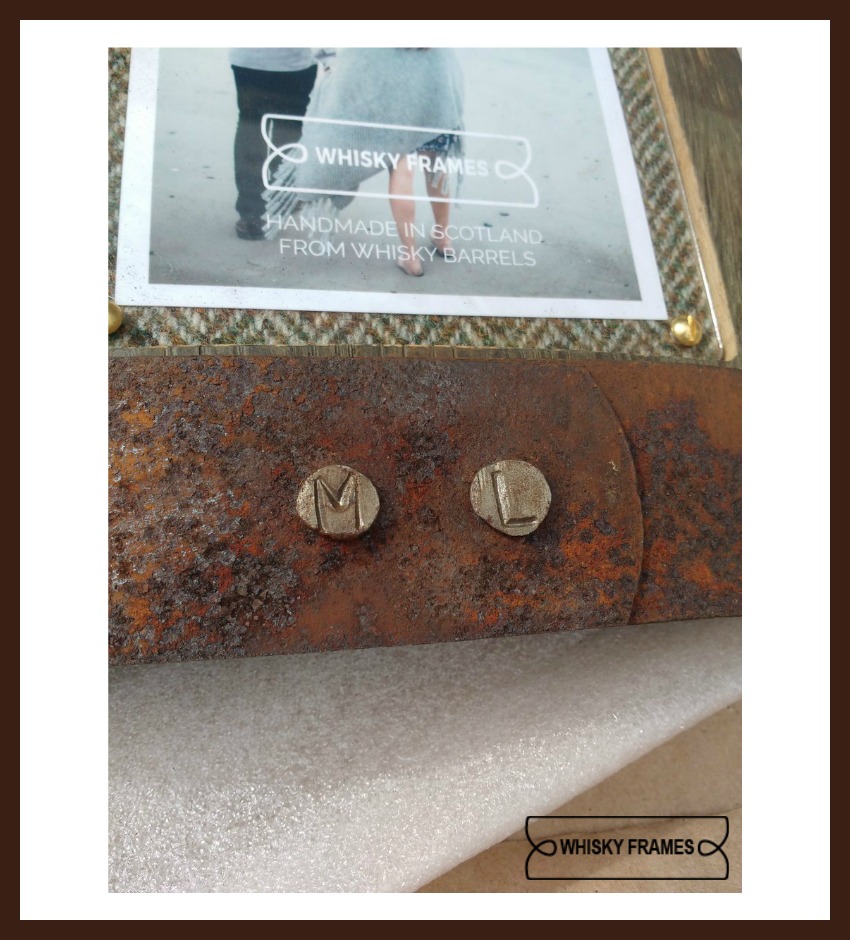 To say my brother was happy with his gift would be a massive understatement – he was over the moon! He couldn’t believe he had never heard of Whisky Frames before and the moment he realised it had a Whisky aroma and that they had personalised the frame for him with his initials and a quote was one I will treasure!  He vowed that he would find a special photo to put in it and a lovely place to display it in his home.  He was genuinely delighted with the gift and he wanted me to say a huge thank you to Whisky Frames for ever so kindly sending it to him. Thank You so much Kristen and Ross for being so kind and sending this to us for review! 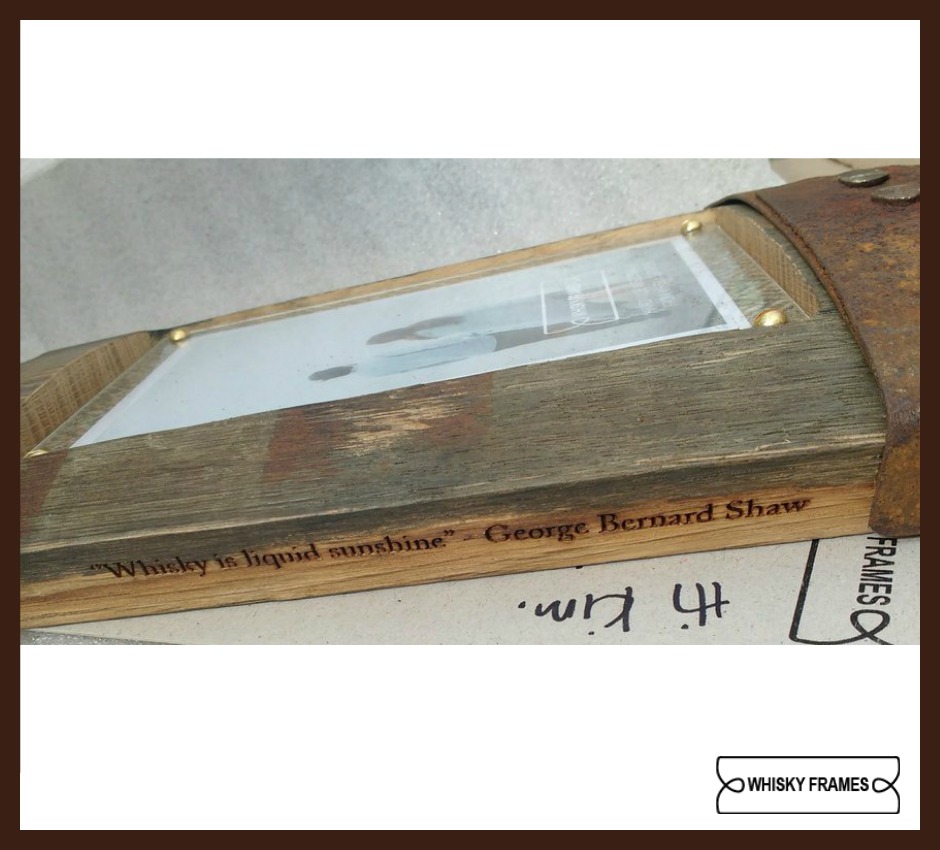 Out of all the review products I have been lucky enough to receive via my blog over the years this was one of the best!! The reason being that I just knew from the moment I saw the photo frames in my twitter feed that that this was The Perfect Gift for my brother. I knew he would never have seen anything like it before and that he would absolutely LOVE it! I was right on both accounts! 🙂

The next time I spoke to my brother he told me he had found the perfect photo to display in the frame so I went round his house to take a look and snap a picture. 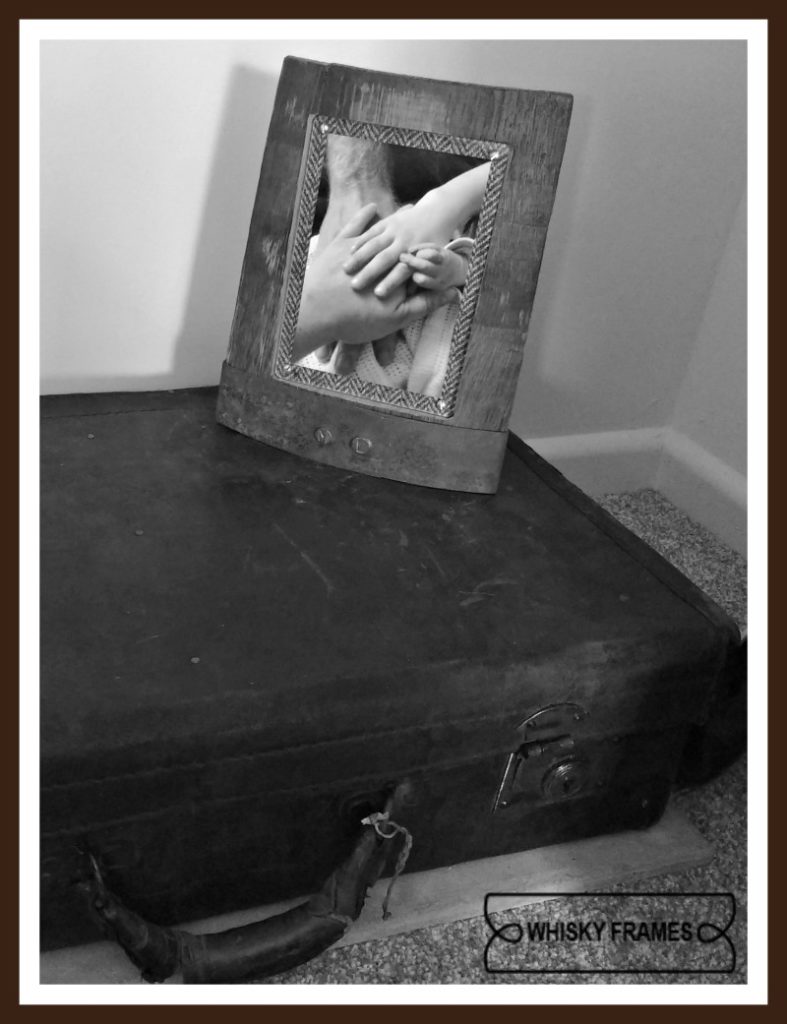 He displays the photo frame on his unique bedside table that he has made. It is a vintage briefcase that he has added an inner wooden support to so that he an use it as a mini bedside table. You might think that a briefcase is a bit of a ‘low’ table to have next to their bed but he recently made the new bed frame and it is as low to the ground as the briefcase! 🙂

The Whisky aroma of the wood has subsided now that the frame isn’t wrapped up in tissue paper but the initial scent was such an added bonus to a fantastic gift! 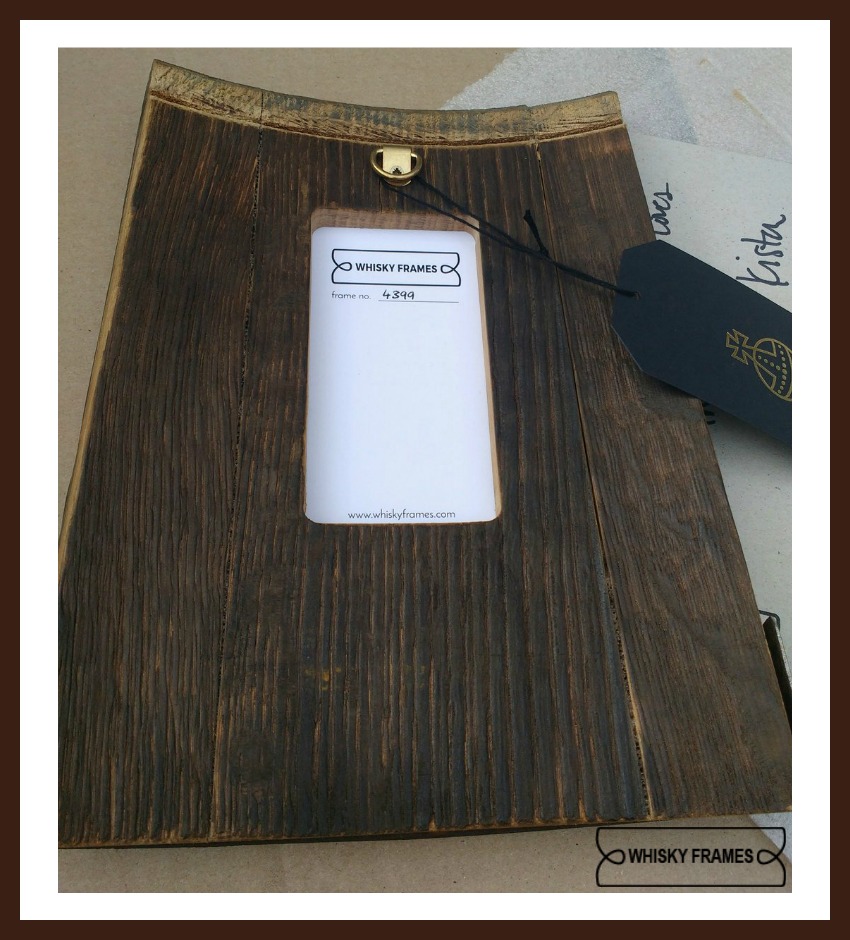 The quality of the photo frame is second to none – yes the steel trim is rusty and tarnished but that is what adds the character to the rustic frame. It is actually what makes the frame worth more money as the aged wood and tarnished steel show the history of what was once part of a whisky barrel.  The frame comes with a little hanging loop on the back so you can hang it up on the wall but if you prefer you can stand it up on display as the wood has been cut in such a way that it is actually free-standing. You put your photo into the frame from the front and it is held tight beneath a piece of Perspex which is secured by simple copper screws. The addition of Genuine Harris Tweed is such a lovely added extra and it adds even more style to the frame.  I genuinely believe these Whisky Frames are worth their retail price as they have been hand-made in Scotland by talented craftsmen using top-quality materials that have a lot of history.

The Ring Chime Photo Frame that was sent to my brother retails at £39.00 but the personalised extras are an additional cost. The monogrammed rivets are £9.50 and the laser engraved message is £12.00 (However, until Father’s Day they are actually offering the engraved message for free! ). So the total cost for the frame with bespoke extras is normally £60.50.  Cheaper than a 700ml bottle of 18 years old Glenfiddich Ancient Reserve Single Malt Whisky which is currently £67.00 at Tesco!

If you invest in a Whisky Frame for your Dad this Father’s Day – rather than a bottle of ‘liquid sunshine’ – he won’t get the enjoyment of drinking the whisky but he will have the pleasure of looking at his bespoke gift every day and that will remind him just how much you must love him to buy such a special gift! Plus if he is a true Whisky fan he will love knowing that he owns part of a whisky cask and if he searches the hand-written number that comes on the back of the frame in Whisky Frame’s online ‘Frame Origin Archive’ he can actually find out which distillery the cask came from! My brother’s Whisky Frame was made from a cask that came from one of Scotland’s oldest distilleries, Littlemill. He loves knowing the provenance of the oak used in his photo frame. 🙂 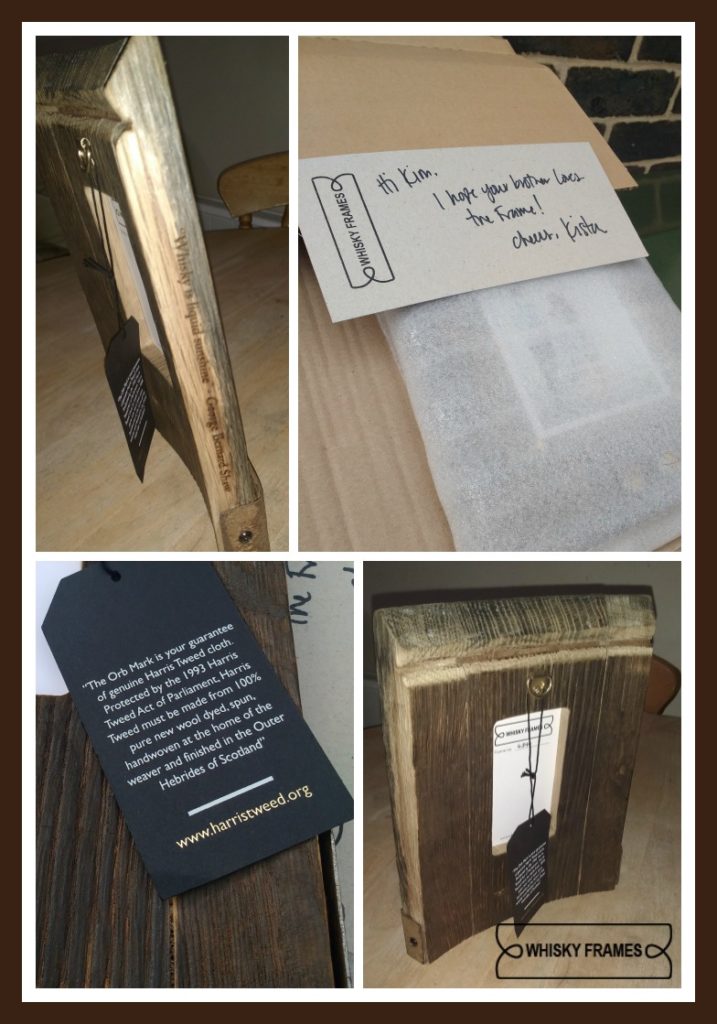 If you would like to purchase a Whisky Frame as a gift for Dad or Grandad this Father’s Day then please head over to www.whiskyframes.com. Don’t forget that on orders up until Father’s Day you can choose to have a laser engraved message added to the frame at no extra charge (usually £12). Plus my lucky blog readers can get an additional 10% off the value of their order by using code MyDaddy2017.

This discount code is valid until 17th June 2017 but please note that you will need to order basic frames (with no personalisation) by 12th June if you want them to arrive in time for Father’s Day.  If you would like the frame to be personalised (with special added extras (costs apply) such as monogrammed rivets , a laser engraved message or a photo of your choice printed and added to the frame) then I would recommend ordering it sooner rather than later as it will take longer for those orders to be dispatched (processing time currently stands at 14 days for bespoke orders).

The basic Chime Frame is £35.00 (bespoke extras available for a fee)

The basic Ring Chime Frame is £39.00 (bespoke extras available for a fee)

The basic Bilge Frame is £46.00 (bespoke extras available for a fee)

Delivery charges are calculated at the checkout according to the weight of your order. 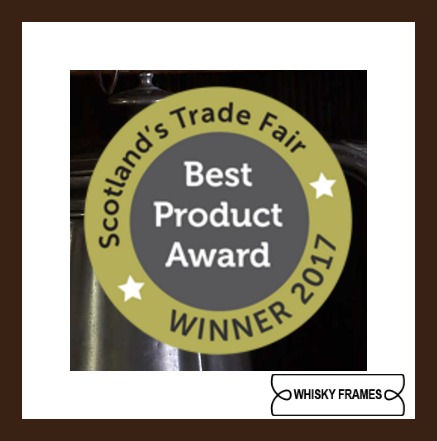 Thanks so much for reading my review.

*Please note that the Whisky Frame was gifted to us free of charge for review on my blog.