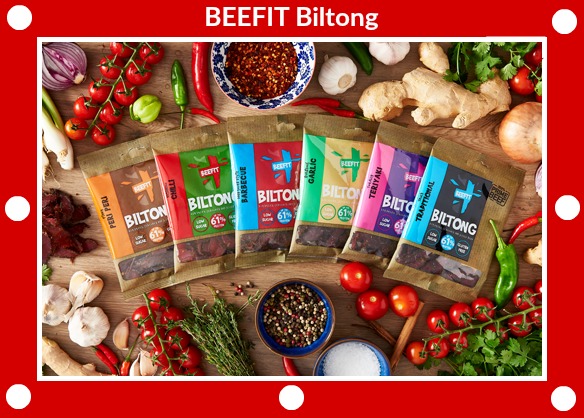 The lovely team over at BEEFIT Snacks kindly sent me one of their BEEFIT Biltong Flavour Fest packs to try out for a review on my blog plus they have offered one lucky winner a free FLAVOUR FEST as a prize (see details about the competition at the bottom of this blog post).

BEEFIT Snacks were formally known as ‘The Chichester Biltong Company’ but after 7 years and a lot of growth in their business they decided to change their brand name. BEEFIT Snacks is the next step in their story, allowing them to develop new and exciting products for an ever-growing tribe of meat snack lovers. Read more here >> beefitsnacks.co.uk/blog/beefit-snacks-launch-promotion-biltong-customers/ 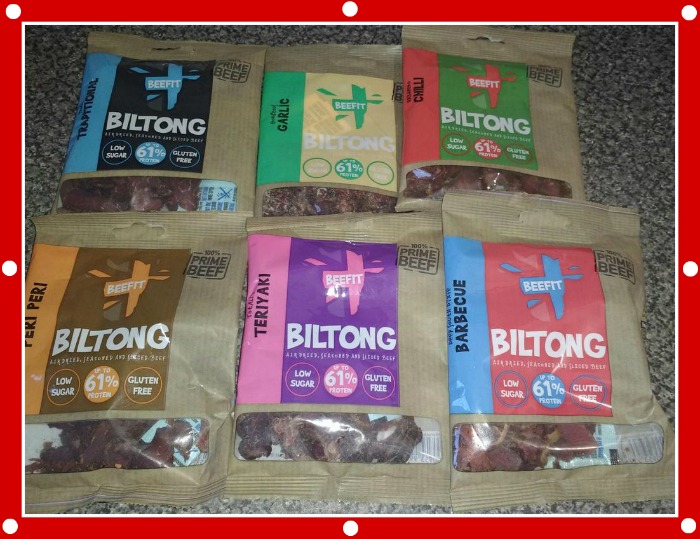 The ‘Flavour Fest‘ pack they sent me consists of 6 different flavour packs of their 100% Prime Beef Biltong and it can be ordered on their website for £11.99.  Order here >> beefitsnacks.co.uk/biltong-shop/flavour-fest-biltong

It contains the following:-

At BEEFIT Snacks they use the finest 100% prime beef which they then slice into thick strips before adding their secret recipe of herbs and spices. They are then placed in a vacuum tumbler, which allows the flavours to fully absorb into the beef.

They then hang the strips of meat in a drying chamber for 5 days – in conditions that replicate the South African climate. One of the benefits of the longer drying process is that more of the moisture is removed from the meat and they end up with a higher protein content than you would find in beef jerky. 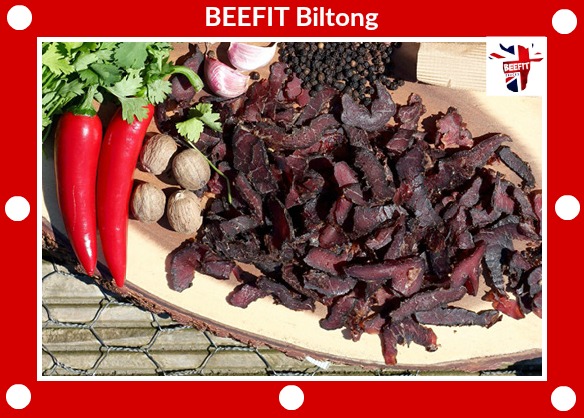 I decided to share the Flavour Fest packs with my brother as he hadn’t eaten biltong before and as he loves eating steak I thought he would enjoy the BEEFIT biltong as it was made with 100% prime beef. Turns out I was right! He thought the biltong tasted great!

I don’t think there is any way we could give you an overall favourite flavour out of all the 6 packs as they were all so different but equally as tasty! The flavourings of the BEEFIT biltong really make them special but the most stand-out feature definitely has to be the fact that it is really obvious that they are using top quality 100% prime beef to make their biltong!

BEEFIT are not using poor quality meat and masking its quality with tons of flavour – instead they are using superb quality beef and enhancing its flavour by marinading it with a selection of the finest herbs and spices!

The biltong is not too dry and chewy, it is a fantastic deep red colour and all the pieces are a decent size.  In the past I have tried eating beef jerky and I have now decided that I definitely prefer biltong as it seems to be so much easier to chew! You can read about the main differences between Biltong and Jerky in this BEEFIT blog post >> beefitsnacks.co.uk/blog/understanding-the-difference-between-biltong-and-beef-jerky/

Each pack in the Flavour Fest contains 35g of biltong which is just the right portion size for one person to eat. Also, if you are on Slimming World (which I am) it works out rather low in syns at an average of just 2.5 syns per pack! Eating a pack of this biltong is a great way to make 2.5 syns last a long time!

BEEFIT biltong is full of protein, low in sugar, low in carbs, gluten free and contains no MSG. 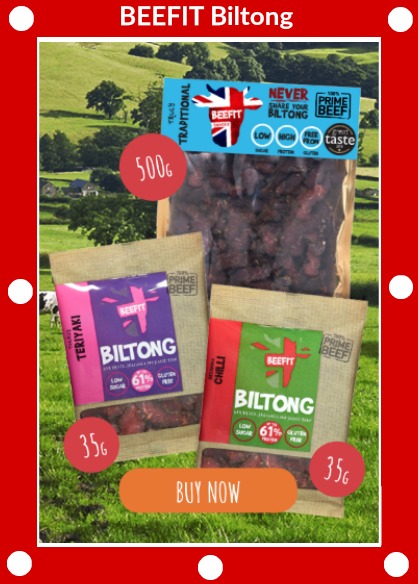 If you decide to place an order for some biltong head to www.beefitsnacks.co.uk. UK delivery is free if you spend over £10! 🙂

A HUGE thank you to BEEFIT Snacks for sending me their biltong Flavour Fest pack to feature on my blog and an even bigger thank you to them for kindly saying they will provide a free ‘Flavour Fest’ pack to one lucky reader! To be in with a chance of winning the Flavour Fest prize worth £11.99 you need to enter the competition via Gleam. You must live in the UK to be able to enter. Good Luck! The competition ends at 11.59pm on the 15 January 2018.