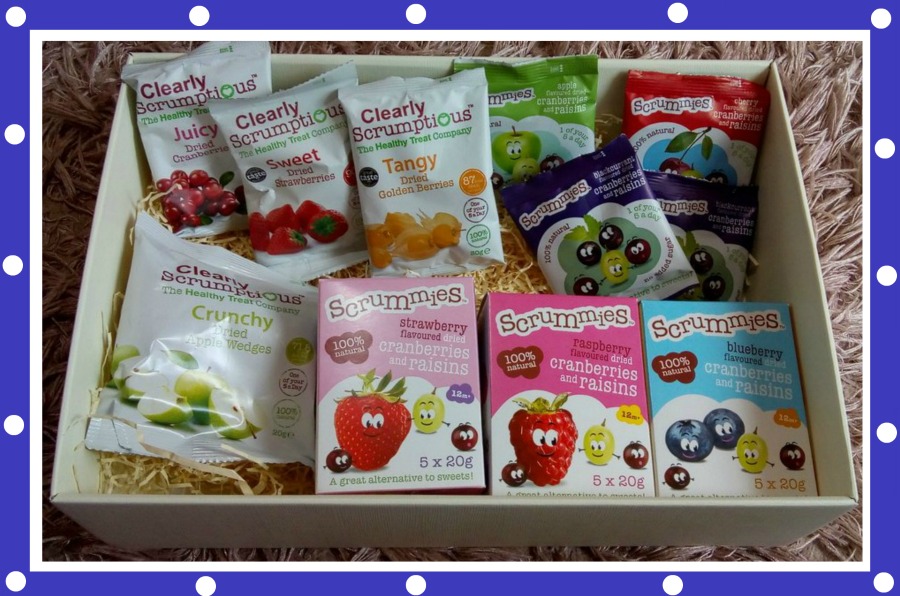 The lovely team over at Clearly Scrumptious sent me this wonderful hamper of healthy snacks to review.  They packaged them all up in a pretty cream box with shredded paper. It was a real treat to open!

They sent me a selection of Clearly Scrumptious Healthy Fruit Treats (aimed at adults) and a selection of flavoured Scrummies (cranberries and raisins – aimed at children). Scrummies are vegan, 100 per cent natural, gluten free, dairy free and contain no added sugar. One pack also counts as one of your five-a-day.

As soon as we opened the box we started trying the products! It was too hard to resist these scrumptious goodies! 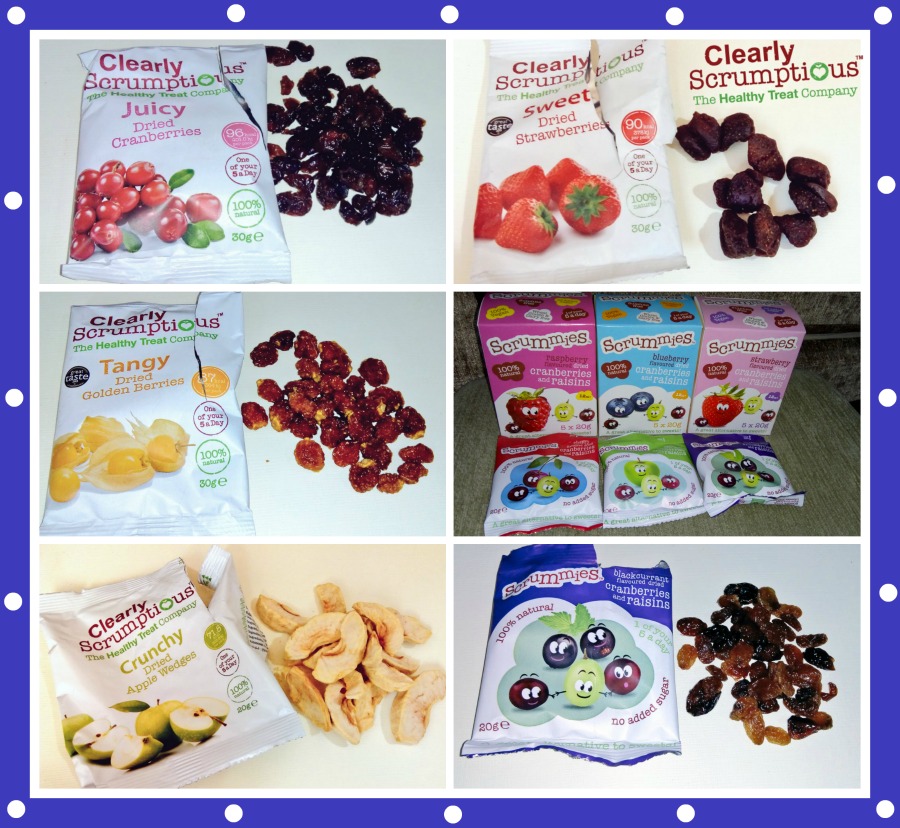 The first thing my daughter went for was the ‘Apple Wedges‘. You get quite a lot in the pack which she was really pleased about plus she said they tasted lovely.

I tried the ‘Tangy Dried Golden Berries‘ and they were soooo tangy! I don’t think I’ve ever eaten Physalis before so I can’t really compare this dried version to the fresh.  Wow, these were so sweet & sour!

The ‘Juicy Dried Cranberries‘ were very zingy and moreish. I would definitely choose to buy these again. You get a good amount of cranberries in the packet and if you eat them one at a time they are perfect as a healthy snack which lasts for more than a few seconds.

The ‘Sweet Dried Strawberries‘ are so sweet & jammy! These are 100% natural & the ingredients are just strawberries & apple juice concentrate. If you have a sweet tooth you are definitely going to love these!

The ‘Scrummies‘ are more aimed at children but as my daughter isn’t really a fan of raisins I had said I would pass the packets on to my sister for her young children as they like them. There was just one problem though…… I decided to try a pack of the Blackcurrant flavour cranberries & raisins Scrummies and fell in love with them!

They are truly delicious and so much like sweets – even though they are actually just blackcurrant flavoured dried raisins and cranberries! I decided I would have to keep a couple of packs of each flavour back for myself. Sorry kiddies!

The Scrummies Cranberries & Raisins are all 20g bags and they sent me the following flavours – Strawberry Flavour, Raspberry Flavour, Blueberry Flavour, Apple Flavour, Cherry Flavour and Blackcurrant Flavour. I tried all of them and it is really hard to pick a favourite as they are all delicious but the ones I loved the most were raspberry flavour. Yummy!

Scrummies retail at approx 50p a pack. They can be bought in selected supermarkets and also online at Ocado. They are 100% natural and contain no added sugar which makes them the ideal healthy snack for children and big kids alike!

It was wonderful to have the opportunity to try out these dried fruit snacks from Clearly
Scrumptious and Scrummies. Dried fruit is not the kind of snack I would normally choose to buy but that has definitely changed since trying these. 🙂