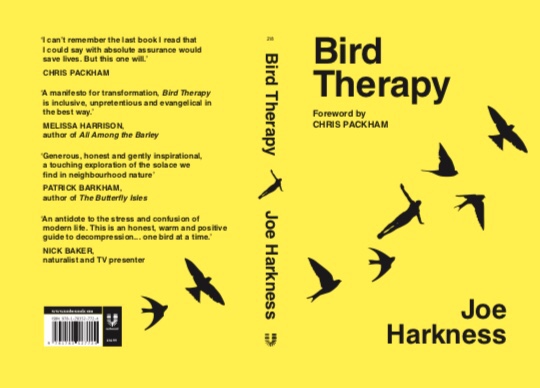 Today I found out via Twitter about a book called ‘Bird Therapy‘ by fellow Norfolk blogger Joe Harkness.

He has written a new book, his first one, about Bird Watching and he has called it ‘Bird Therapy‘ because to him that is exactly what bird watching is….therapy.  Joe explains in the video below that he has suffered from mental health problems and in 2013 his life imploded and he made a drastic decision to take his own life. Thankfully he didn’t go through with it and he managed to get help in the form of medication, a year’s worth of counselling and he went on a mindfulness course, amongst other things.  It was then that he started bird watching and he found that being amongst the birds and watching them go about their daily lives made his mental health and wellbeing improve and that is why he coined the phrase, his ‘Bird Therapy’.

He then started blogging about his Bird Therapy back in January 2015 as a way to journal his feelings and you can see all his blog posts over at www.birdtherapy.blog.

The idea of a book then came about (thanks to his friends advice) and it has finally come to fruition and is being published really soon. He hasn’t written and published his book to become a world famous author though, instead – as he explains on BBC Winterwatch with Chris Packham (see the video below) –  he just wants to make a difference to other people’s lives for the better. He said “All I want to do is for one person to be able to pick that book up, read it and think, yeah, I get that. And I’m going to try that and I might enjoy that and that might change some of the ways that I think and feel. And that’s job done , isn’t it.‘

I think it is fantastic that he has gone ahead and written this book. It is being published by Unbound – the world’s 1st crowdfunding publisher and you can pre-order it on Amazon and Waterstones now.

Here is the Amazon description of the book:-

‘When Joe Harkness suffered a breakdown in 2013, he tried all the things his doctor recommended: medication helped, counselling was enlightening, and mindfulness grounded him. But nothing came close to nature, particularly birds. How had he never noticed such beauty before? Soon, every avian encounter took him one step closer to accepting who he is.

The positive change in Joe’s wellbeing was so profound that he started a blog to record his experience. Three years later he has become a spokesperson for the benefits of birdwatching, spreading the word everywhere from Radio 4 to Downing Street.

In this groundbreaking book filled with practical advice, Joe explains the impact that birdwatching had on his life, and invites the reader to discover these extraordinary effects for themselves.’

I hope lots of people buy the book or get to receive it as a gift as I think it really will encourage people to give bird watching a go and then that in turn will help them take steps to improve their wellbeing.

I can’t say that I am much of a bird watcher myself but my dad is and always has been. He loves going bird watching around Norfolk and I love hearing him enthusiastically telling me afterwards about what he has spotted in the trees or on a lake.

Just last week my Dad bought an extra pair of binoculars so that my 9 year daughter could go out in the garden and spot birds with him. Then a few days ago he came back from a charity shop with a bird spotter’s reference guide for her so she can learn to identify the birds. I love that he can teach her about bird watching and they can share this interest. 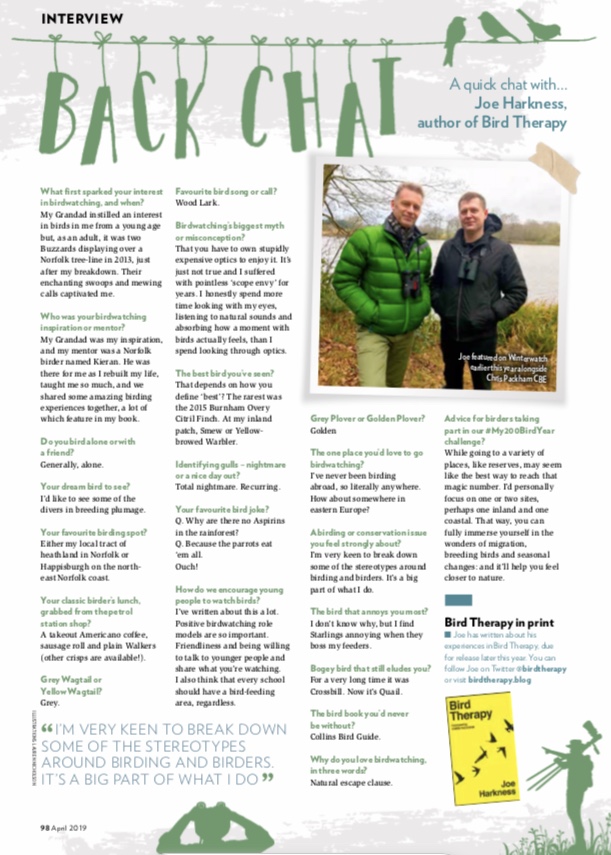 Yesterday my daughter and I went to a busy Morrisons supermarket and then she told me to be quieter when we were walking through the car park as she had spotted a bird high up on the roof and she didn’t want me to disturb it because she wanted to get a good look at it – sadly minus the binoculars though as they weren’t with us. Unfortunately we only got a distant look at it before it went over the other side of the roof but it was black and white and had a long tail. As you can tell, I have no definite idea what it was (although I am thinking it was probably a Magpie after looking at this garden bird identifier  )….but I love that when she sees her Grandad tomorrow she will excitedly tell him and they can look through the book to see if she recognises it.

Please take a moment to follow Joe Harkness on Twitter and if you want to pre-order his new book ‘Bird Therapy’ you can do so by clicking here.

*Please note that this isn’t a sponsored post or anything. I just read about the book on Twitter and then watched the episode of Winterwatch and felt compelled to share news of the book with you all.