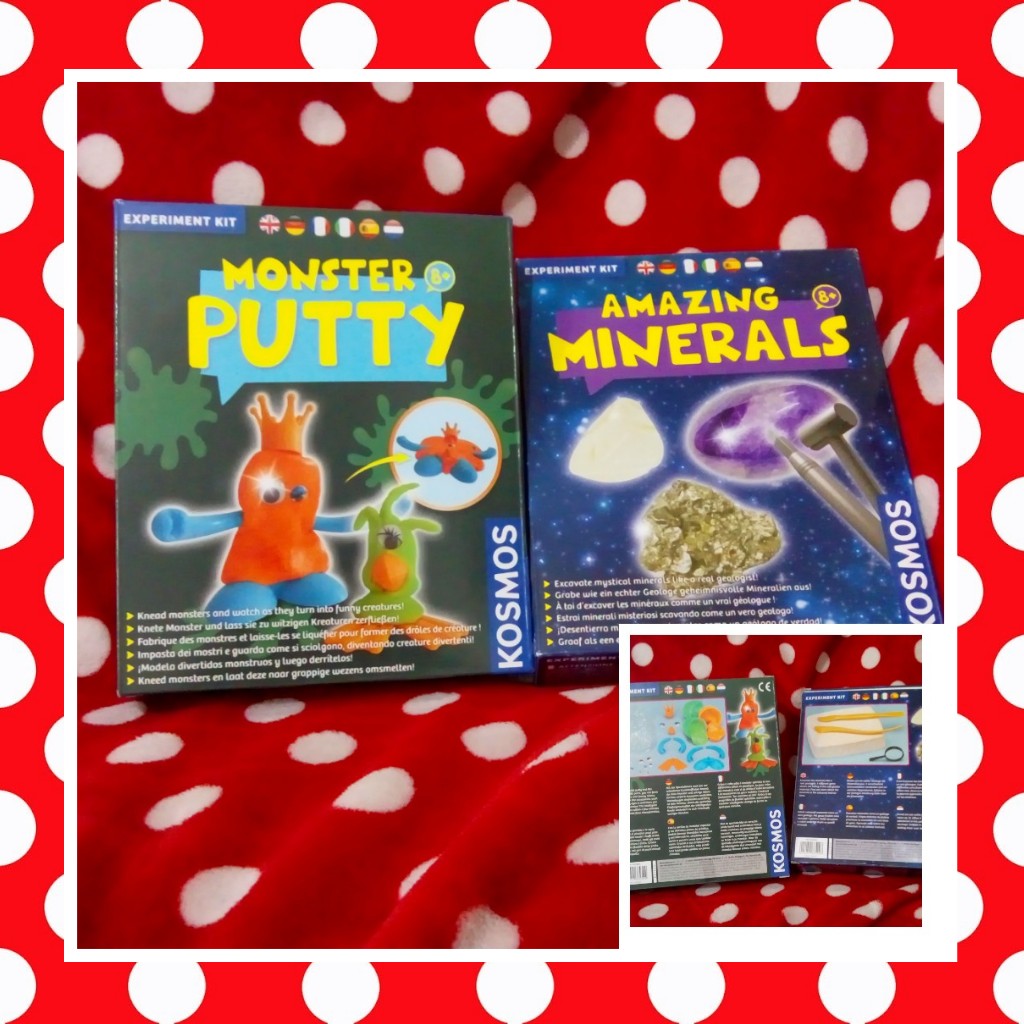 My 9yr old daughter had a fantastic time over the Easter holidays and she got to have fun using two new #STEMToys Science kits from Thames & Kosmos that were gifted to us for review. The kits she received were — Amazing Minerals and Monster Putty. They are both from the new Stem Labz range and other items in the range are as follows:-

Before I commence with the review I just wanted to tell you all that I am hosting a competition for Thames & Kosmos and one lucky winner will receive one of the new Stem Labz kits as the prize. The team at Thames & Kosmos will pick which one they send out to the winner so it will be a surprise. You can enter the competition via the ‘Gleam’ app at the bottom of the review.

As I home educate my daughter we don’t really have ‘half term’ as such because we still do learning every day and these science kits were exactly our cup of tea. From my point of view I loved that she was doing a science activity and from her point of view she loved that she was having fun! It’s a win-win!  The educational, but fun, kits are priced at £8.99 each and they are aimed at kids aged 8+. As we were at home over Easter we did the kits there but if you were going away for the school holidays you could easily take these with you to do in your holiday cottage or static caravan etc. 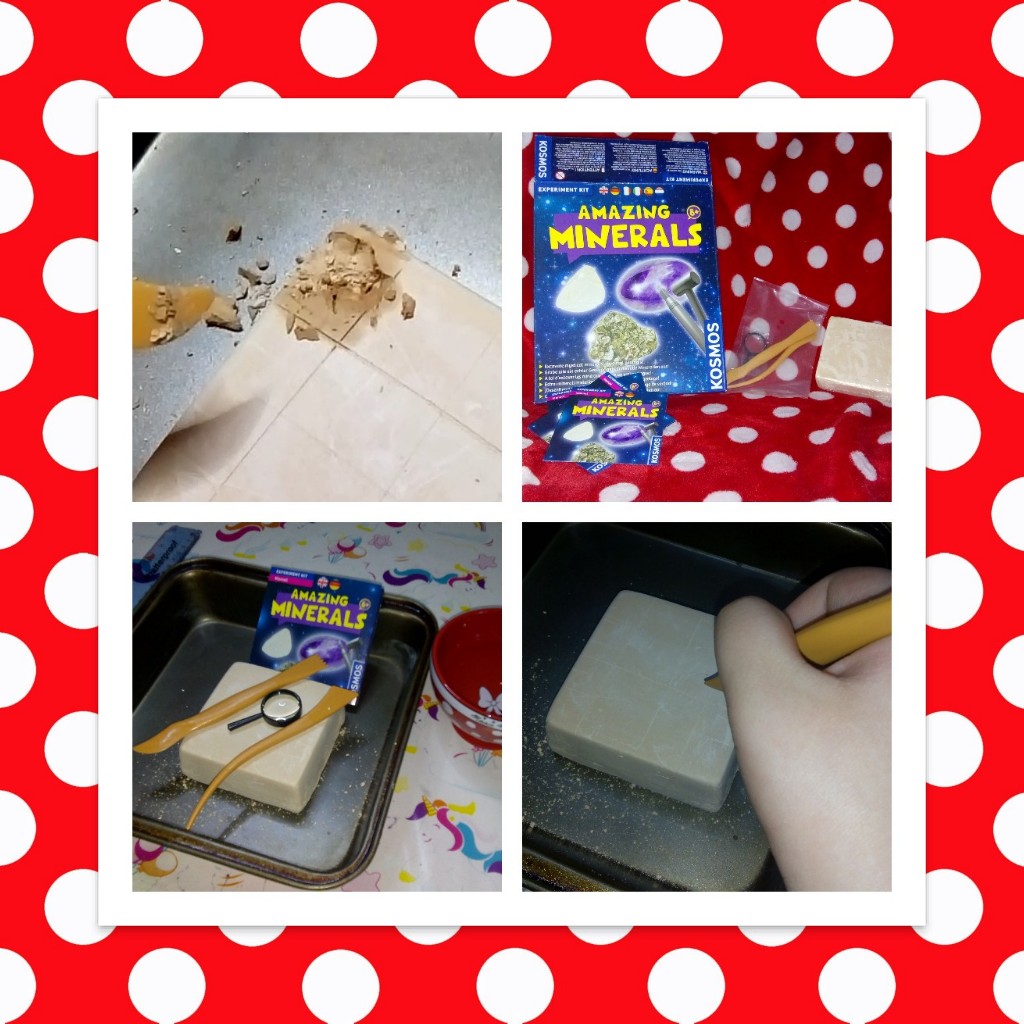 With the ‘Amazing Minerals‘ set my daughter got to excavate minerals like a real geologist. There were 3 gemstones hidden inside the block and my daughter happily dug them out! The activity took about 30 minutes then extra time was spent looking up about minerals and gems online. She has always loved these ‘Digging’ sets so when she did discovered that she had been sent this set to try out she was delighted.

Everything you need for the activity is in the pack (2 tools, mini magnifying glass, block of plaster type material with gemstones hidden within and an instruction leaflet) except for a paint brush to paint water on to the block  and also a ruler to mark out the grid on top of the block. Neither of these last 2 things are essential though as you could easily just draw a grid on top of the block freehand and drip water onto the block rather than brushing it on.

The video above shows my daughter discovering one of the gems hidden within the block and she then places it into a little bowl of water to rinse any of the ‘mud’ off of it.

As I mentioned before, she loves kits like this so she was so happy to be trying it out for a review on my blog and even happier to think it was a brand new kit that was newly released. Thanks Thames & Kosmos! 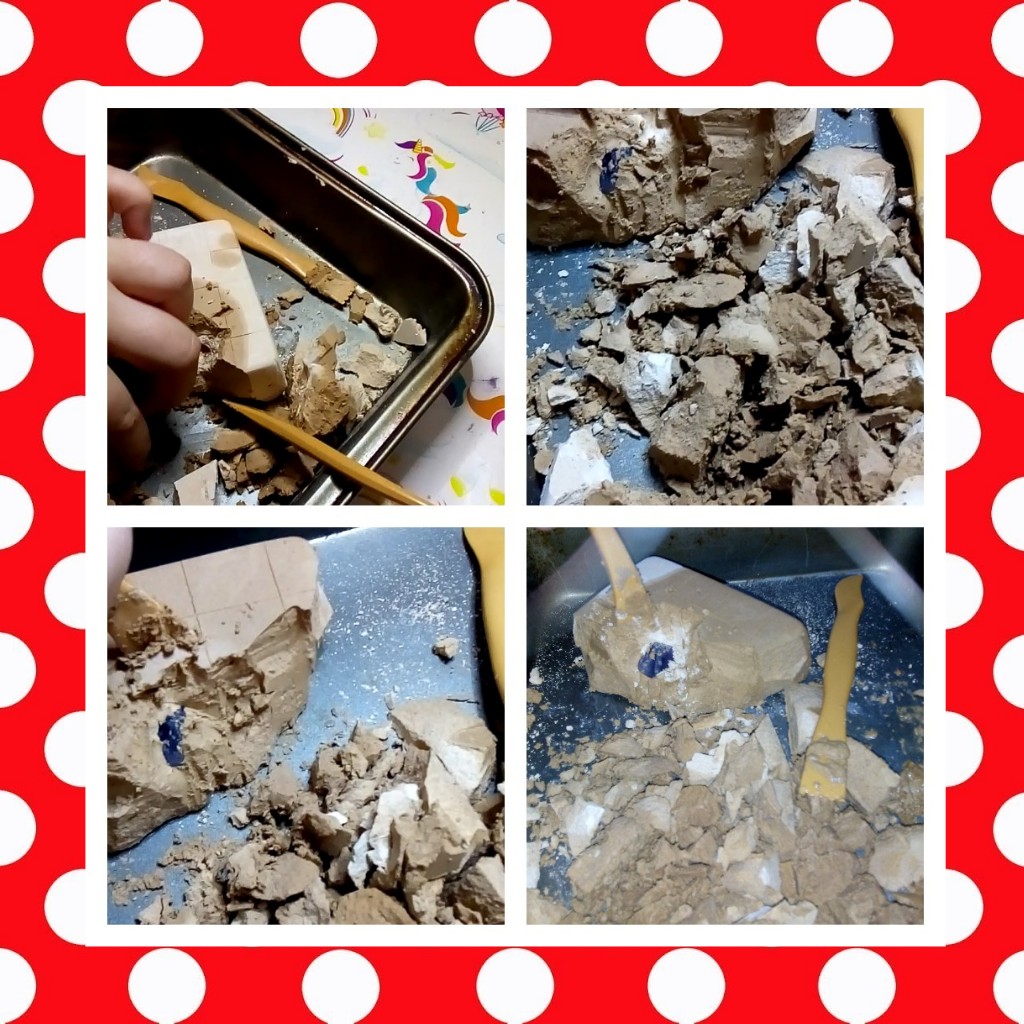 As you can see from the photo above, the activity is a bit messy to do but the mess can really easily be confined to a small area if you put the block into a baking tin (like me) or on a tray etc. Cleaning up after the activity has finished is quick to do as you just bin the leftover ‘mud’ from the block, rinse the gems and wash the tools and hey presto, you’re done!

Once your child has then discovered all three gems they can set about researching them on the internet or in books from the library etc to see what they are and then they can pop them in to their gemstone collection, if they have one – which my daughter does. 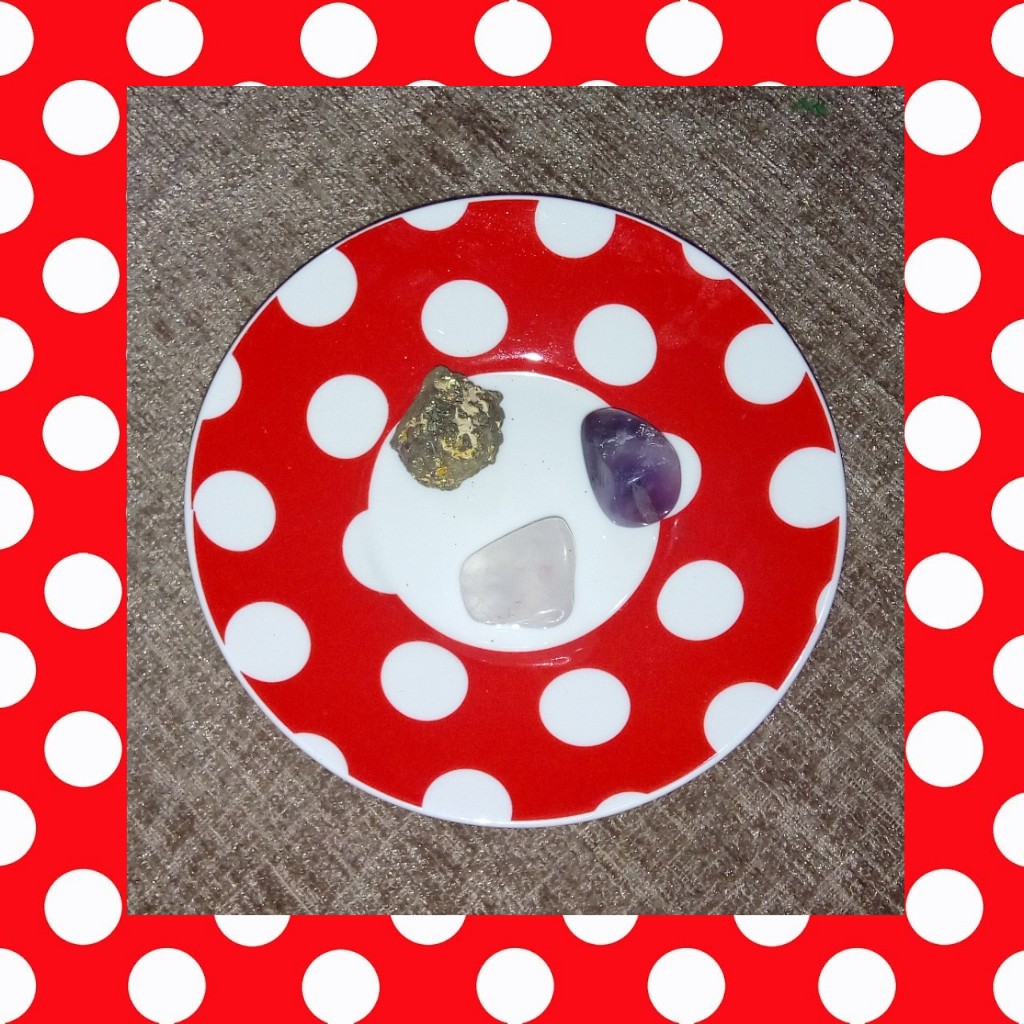 The photo above shows the 3 gems that my daughter discovered inside the plaster block in the Amazing Minerals science kit.

Once my daughter had completed the ‘Dig It’ kits, as she tends to call them, she then set about opening the ‘Monster Putty’ STEM kit.  She was so eager to get her hands on the putty that I found her taking my ‘review photos’ of the box and contents herself using my phone so she could open up the science kit to play with! 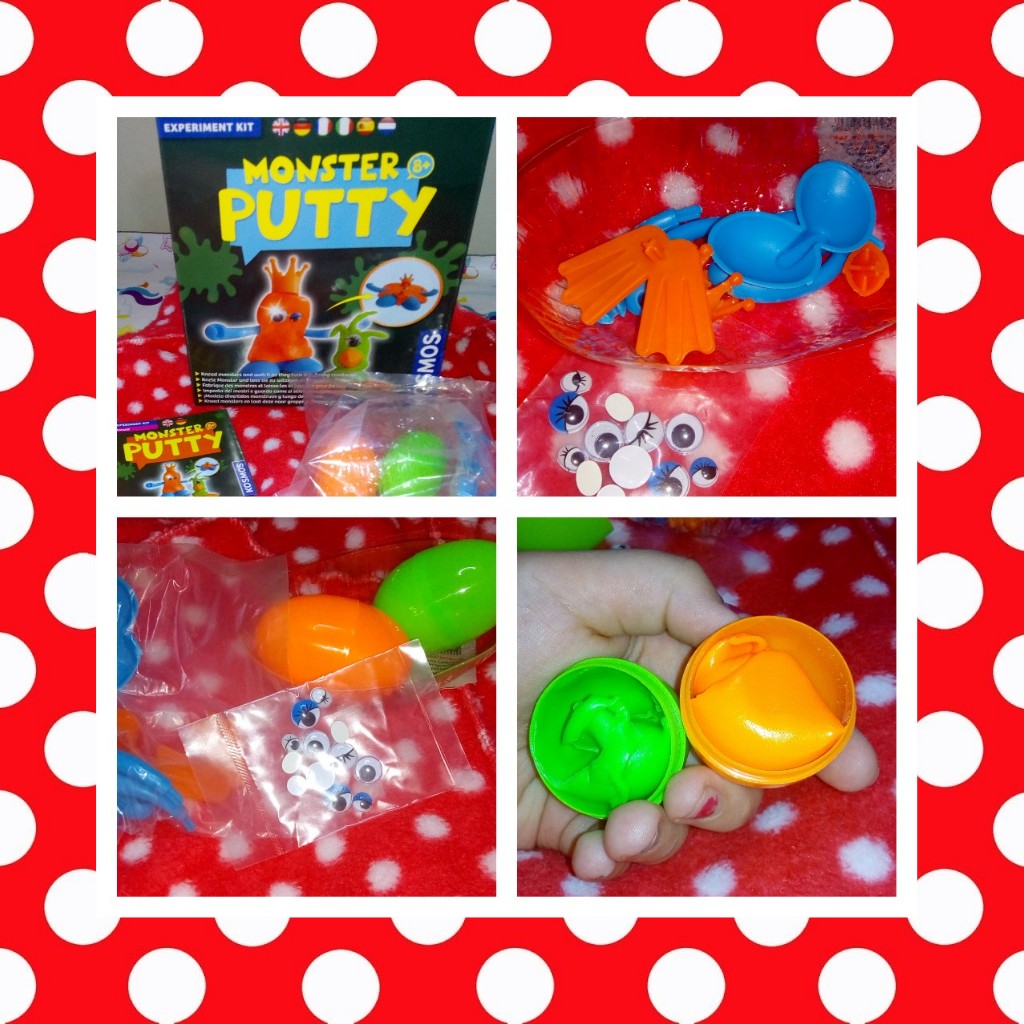 Upon opening the outer box of the kit you find two egg shaped containers with a small amount of ‘putty’ in each – one green and one orange, a plastic mould (kind of the shape of half an easter egg!), some googley eyes, some plastic accessories and an instruction leaflet.

If I’m honest my daughter wasn’t really bothered about the plastic limbs and eyes that were included to use with the putty to make models. She was more concerned with just playing with the putty and squishing and bouncing it!  At first I then thought that this meant that either the kit wasn’t worth the money or maybe she just wasn’t the target market but then we read the instruction leaflet and saw that it had experiments you could do! And these experiments then taught you something scientific….so I was all for doing them and then suddenly so was she!

The video above shows her following one of the experiments which was to roll the putty into a ball and bounce it, then to roll the putty back into a ball and gently stretch it out and watch how it gently flows out into a long strand – like stretching out chewing gun (Don’t pretend you haven’t done it…I think we all have! 😉 ) – and then finally to roll the putty back into a ball and then quickly pull it apart with force to watch it abruptly split down the middle and not stretch out as before. Basically, in scientific terms this shows that the putty is a non-newtonian fluid and this kit showed her in a hands-on way what means exactly. To quote from this informative ScienceLearn article, ‘Non-Newtonian fluids change their viscosity or flow behaviour under stress. If you apply a force to such fluids (say you hit, shake or jump on them), the sudden application of stress can cause them to get thicker and act like a solid, or in some cases it results in the opposite behaviour and they may get runnier than they were before. Remove the stress (let them sit still or only move them slowly) and they will return to their earlier state.”

She really enjoyed making the video for me, although it did take us a few attempts as the ball of monster putty kept bouncing on the floor and she had to climb under the table to recover it! Thankfully we managed to get there in the end.

Another one of the experiments was to form it into a sausage shape with eyes on and put it on top of the mould and then wait and see how it gradually starts to flow over the mould. I’m afraid we didn’t really get this experiment to work very well but maybe you are supposed to wait longer than 5 minutes, which is about how long we waited. My daughter was too eager to just play with the putty! We can always try again another day though as we still have the mould and monster putty.

The last experiment we tried was to form a kind of ‘body’ shape and put the crown, limbs and eyes on it and then place it on the table and almost instantly the shape started to fall back and collapse onto the table. See the photo below to see what I mean. 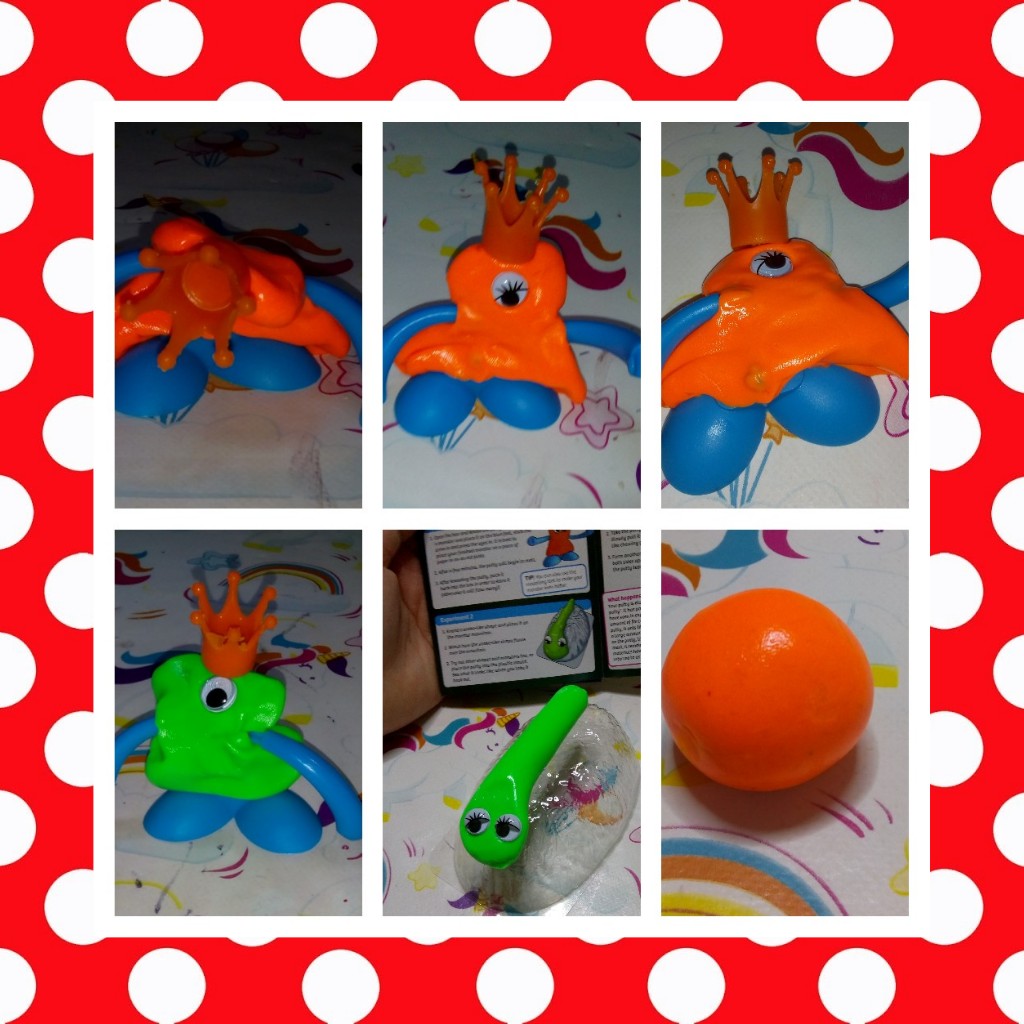 The ‘Monster Putty’ set probably lasted the same amount of time to play with as the Amazing Minerals’ set, so about 30 minutes, although you get to keep the putty to play with another day. My daughter happily put the putty into 2 empty pots she had and popped them in the ‘Slime’ drawer of her ‘Arts and Craft’ unit. Yes, she is so obsessed with slime and putty that she has a whole drawer full of it!

By far the best thing about this kit was it actually showed my daughter about ‘Non-Newtonion Fluids’ and she got to see for herself what it means. It’s a hands-on kit that taught her something useful and educational….perfect as part of her home education but equally fun too. Even I was impressed by the way the experiment that we filmed managed to actually ‘show’ you what a non-newtonian fluid is. Great kit!

Even better though is the fact that the knowledge stuck in her head because about a week later she was watching old Blue Peter videos on You Tube and she came across one where Radzi walks across custard and as soon as she saw what he was doing , and before Blue Peter could even tell her, she said that the custard was a ‘non-newtonian fluid’ and she was spot on! Excellent work Thames & Kosmos! Her knowledge has certainly grown this Easter with the help  of your new science kits.

Here’s the Blue Peter clip I mentioned, you must watch it. It’s amazing!

As a home educator I love kits likes the ones they sent me as they make learning fun….which is what it should be. Also, for us it covered ‘literacy’ (reading the instructions) and because I filmed her doing the kits ( although sound is off in my videos on here) she got to explain the processes & her understanding of the experiments which is a great way for me to see what knowledge she’s gained from the kits. I’d like to say a big thanks to Thames & Kosmos for sending us these kits to try out. They were great to play with during the Easter break.

If you would like to purchase these kits you can do so by going to the Thames & Kosmos website.

Here is the link to the Amazing Minerals set >>thamesandkosmos.co.uk/shop/stem-labz/amazing-minerals/

Here is the link to the Monster Putty set >> thamesandkosmos.co.uk/shop/stem-labz/monster-putty/

Now to the competition!

If you would like to be in with a chance of winning one of these new Stem Labz activity kits from Thames & Kosmos you need to enter my competition below. You gain entries by completing different tasks via the Gleam app. The competition is open to UK entrants only and it closes at 11.59pm on 19th May. The winner will be picked at random (via Gleam) and they will be emailed to arrange delivery of their ‘mystery’ kit from Thames & Kosmos. Wonder which one they will send out to the lucky winner?

Win A STEM Toy From The New Thames & Kosmos Range (What you receive will be a surprise!)

8 thoughts on “Review Of NEW Science Activity Kits for Kids from Thames & Kosmos. Amazing Minerals and Monster Putty. Plus A Giveaway! (ends 11.59pm 19th May)”