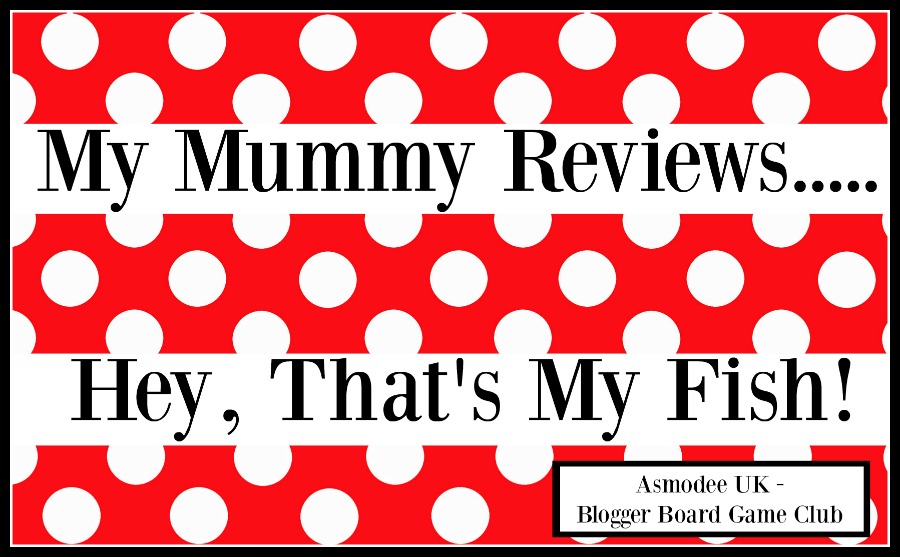 Today I’m bringing you a review of ‘Hey, That’s My Fish!‘ which I was gifted in exchange for an honest review as part of the Asmodee UK Blogger Board Game Club. In case you’re not aware, Asmodee UK is an established distributor of games, collectables and toys – both domestically and across Europe.

Nothing beats playing a board game with friends and family! Ever since I was little I’ve been a big fan of board games such as Scrabble and Monopoly and I have tried my best to pass my love of table top games onto my 9 year old daughter. We have 5 boxes FULL of board games and card games in the IKEA Kallax unit in our lounge and we can’t help but add to our collection all the time. I think a lot of this is because I home educate my daughter and I personally feel that board games can be educational but fun at the same time….a winning combination!

When the opportunity came about to be part of the Asmodee UK Blogger Board Game Club (organised by Playtime PR) I jumped at the chance! I was given the chance to select 3 board games from a huge list they supplied me with and then fingers crossed I would get my choices sent to me. Guess what, I did! 🙂 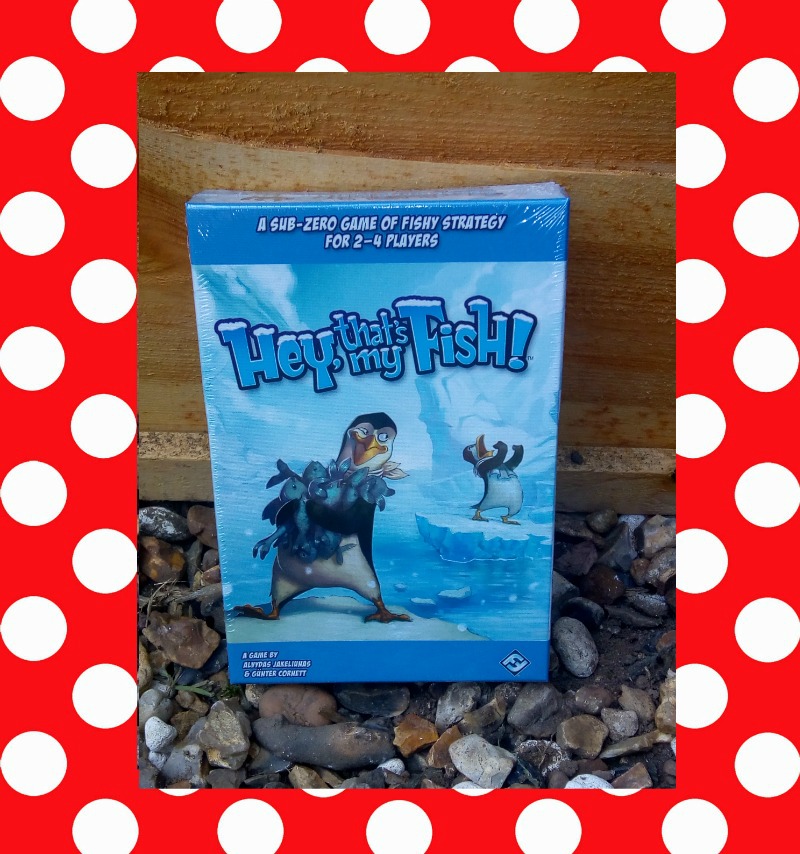 My first choice of game, which I am reviewing today, is ‘Hey, That’s My Fish!‘ by ‘Fantasy Flight Games‘. It retails at £14.99 and it can be bought from many different retailers – both on the high street and online. Amazon UK are selling it here >> www.amazon.co.uk/Hey-Thats-Fish-Board-Game/dp/1616613513

The game is described by Asmodee as “an engaging, award-winning board game of strategic fish hunting, in which 2-4 players control determined penguins hungry for their next meal on a bustling Antarctic ice floe.” 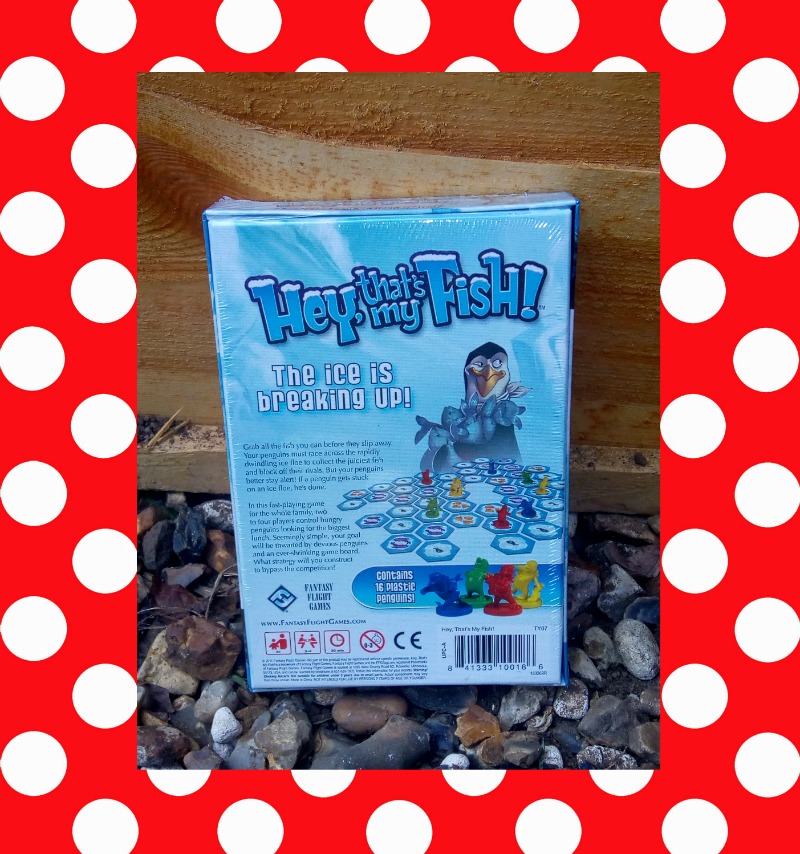 To be honest, I was a bit apprehensive about playing the game at first because I wasn’t sure how easy it would be to play as it was so unlike other games my daughter and I had played together before. However she was so eager to start playing the game (I think the fun images of the penguins and ice floes on the box made her excited about the prospect of playing the game) that I had no choice but to read the instructions straight away so we could have a game! Basically the winner of the game is the player that collects the most fish using their penguins! Sounds simple…but is it?! 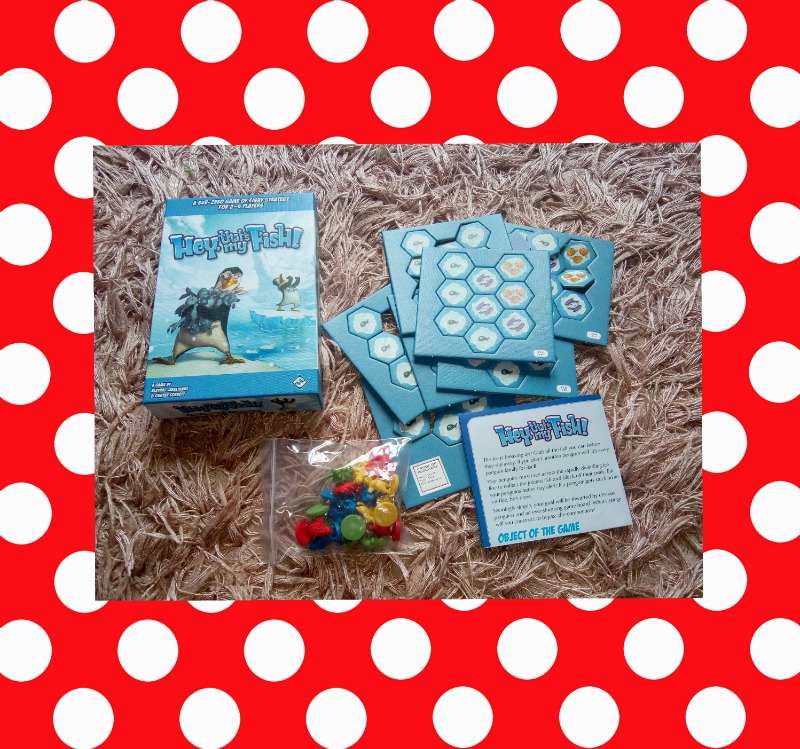 The image above shows the contents of the box. You get 60 smallish hexagonal Ice Floe tiles (each one has an illustration on it of either, 1, 2 or 3 fish), 16 penguin counters (4 of each colour – Green. Blue, Red and Yellow)) and a rule sheet……that’s it! Not loads of complex pieces that you have no idea what to do with – just a load of hexagons and some plastic penguin characters! That’s my kind of game! 🙂 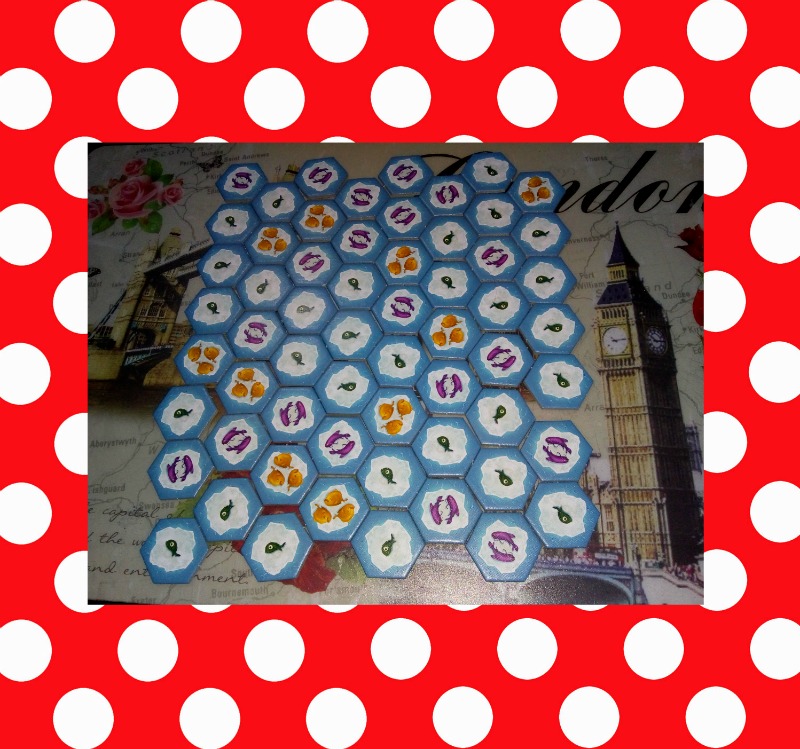 Game set up is really easy but does takes a few minutes. Basically you just need to shuffle the tiles and then lay them all down in an interlocking grid on the table (like the photo above). The lines need to be in a sequence of 8 tiles, 7 tiles, 8 tiles, 7 tiles etc. and you will end up with a random grid of hexagonal tiles.

Ideally you should make sure that the ice floe tiles with one, two and three fish should be more or less evenly distributed amongst the grid of tiles but we didn’t really pay much attention to this at first. The more you play the game and the more you start playing it strategically it will become more important to make sure the tiles are evenly distributed so that you can make sure neither player has an unfair advantage. 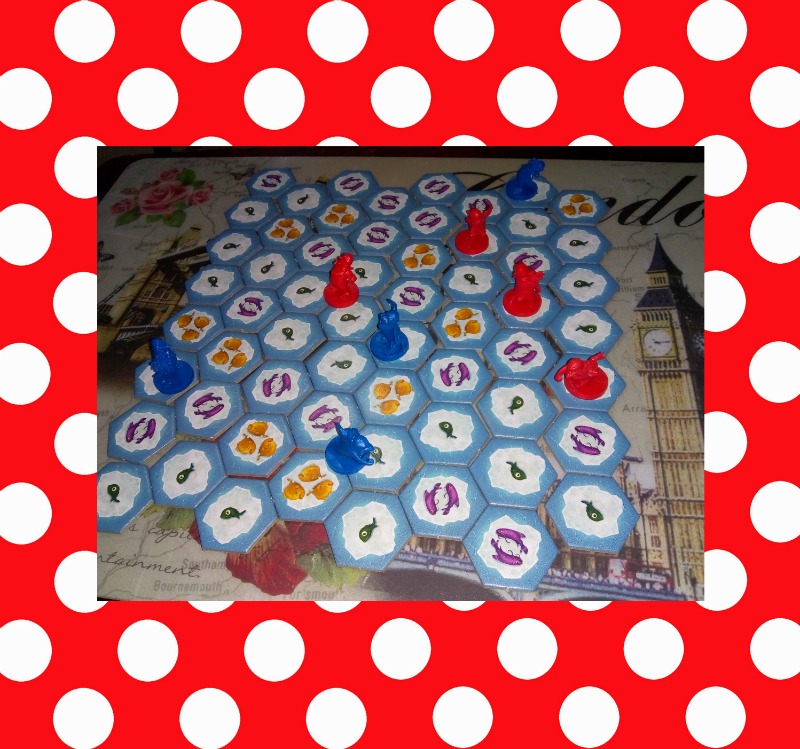 Once it’s been decided how many penguin counters each player needs on the board, you then place each ‘penguin’ on an unoccupied tile that has one fish on it. You start with the youngest player and they place one penguin on the board and then it goes to the next player who places one of theirs on the board and then back to the first player etc – until all the penguins are on the board – each one on a ‘One Fish’ Ice Floe tile.

The photo above shows what this should look like.

Now the game can commence! (See photo below)

The youngest player starts by moving one of their penguins as far as they like in any direction – over the connecting ‘unoccupied’ Ice Floe tiles. Once you’ve completed your move you get to keep the Ice Floe tile which you’ve just vacated (and then that number of fish – in the instance of the first move it will be ‘1 fish’ then goes into your total). As the idea of the game is to be the person with the most fish it makes sense to try and move as far as you can and end up on a tile with three fish on it as then when you move the next time you get to keep the ‘3 fish tile’.  However….. you’re not allowed to move across/over tiles which are missing and you cannot change direction. So basically whichever tile you move to and then subsequently leave will then ultimately be removed and this will then create a gap in the playing board and hinder not only your progression around the board to catch fish but it will also hinder your opponent. 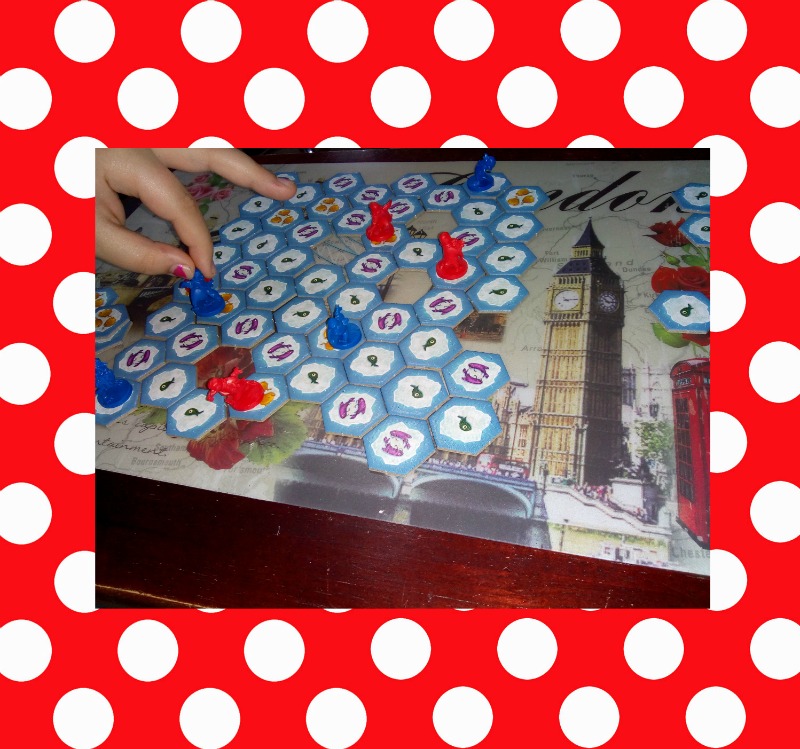 I’m aware that I am making this sound slightly complicated but it really isn’t. I promise! My 9 year old daughter understood the rules straight away and after a few games she started to play strategically and ‘planned’ in advance where she was moving to around the board so she would be able to remove Ice Floe tiles and basically leave my penguins stranded with gaps all around them so they couldn’t move anywhere to collect any more fish!

Once the first person has made their move and then collected their tile the play then commences clockwise and the next player takes their go. When there are Ice Floe Tiles on th board that can no longer be reached by any penguins in play then those tiles are removed and put to the side (neither play gets to count those fish as their own).

If a player finds they can’t move any of their penguins they need to remove them from the game and also the Ice Floe Tiles that they are standing on.  The other player/s continues to play the game until they too end up in a position where they can  no longer make any moves. 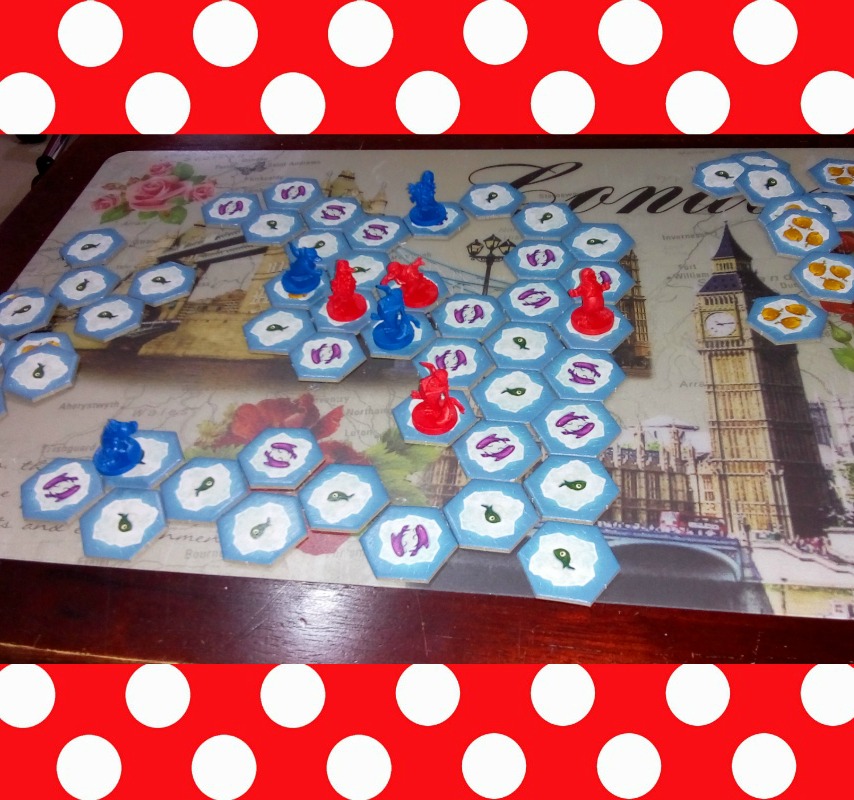 Now the end of the game is in sight and all you need to do is count up how many ‘Fish’ you’ve each caught. The winner is the person with the most fish. I hate to say this but my daughter beat me on all occasions when we first started playing the game!  If there are more than 2 players and both players have caught the same amount of fish then the overall winner will be the player with the most Ice Floe tiles. If, it turns out that both winners have the same number of tiles then there will be no outright winner and you’ll just have to play again!

Overall we are extremely impressed with this game and I would definitely recommend it to you if you’re looking to buy a ‘starter’ strategy game to play with your child. My daughter is 9 years old and got on really well with this game but in my opinion a child as young as 7  could probably get the gist of how to play this.  The quality of the cardboard tiles and plastic penguin counters are superb and it all fits really neatly into a fairly small box which can easily be stored away or packed into a suitcase to take on holidays.  Game play only takes about 10 minutes or so but it does take a few minutes to set up the game board before each game. It can be slightly tricky to remove the ice floe tiles when you vacate them but this can be done with an adult’s help so it doesn’t need to hinder a child’s enjoyment of the game. 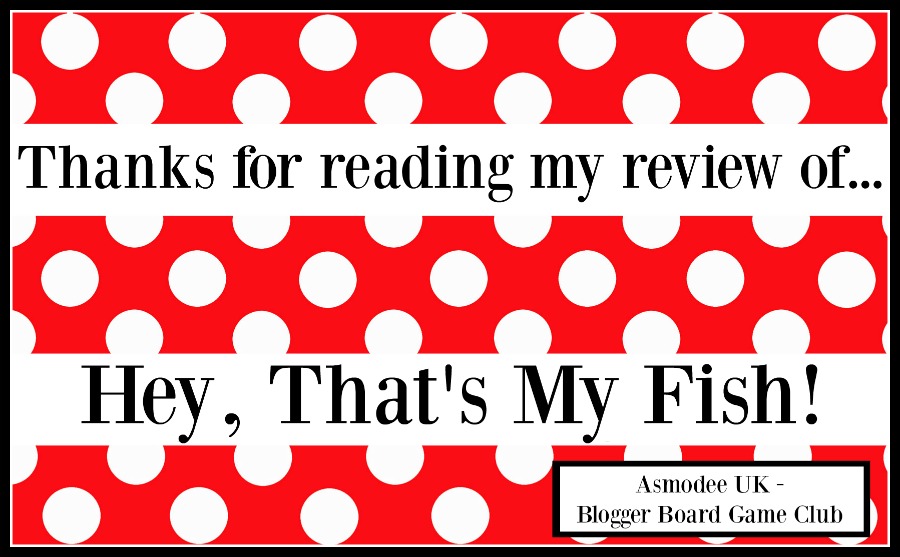 As I stated earlier on in this review, I was gifted the ‘Hey, That’s My Fish!‘ board game as part of the Asmodee UK Blogger Board Game Club but this was in return for me sharing with you all my honest review of the game,  I hope you find my review helpful.

The next game I will be reviewing is the ‘Ticket to Ride – Europe’ and I look forward to letting you all know how we are getting on with playing it. The review will be live at the end of next week (week commencing 27/05/19)