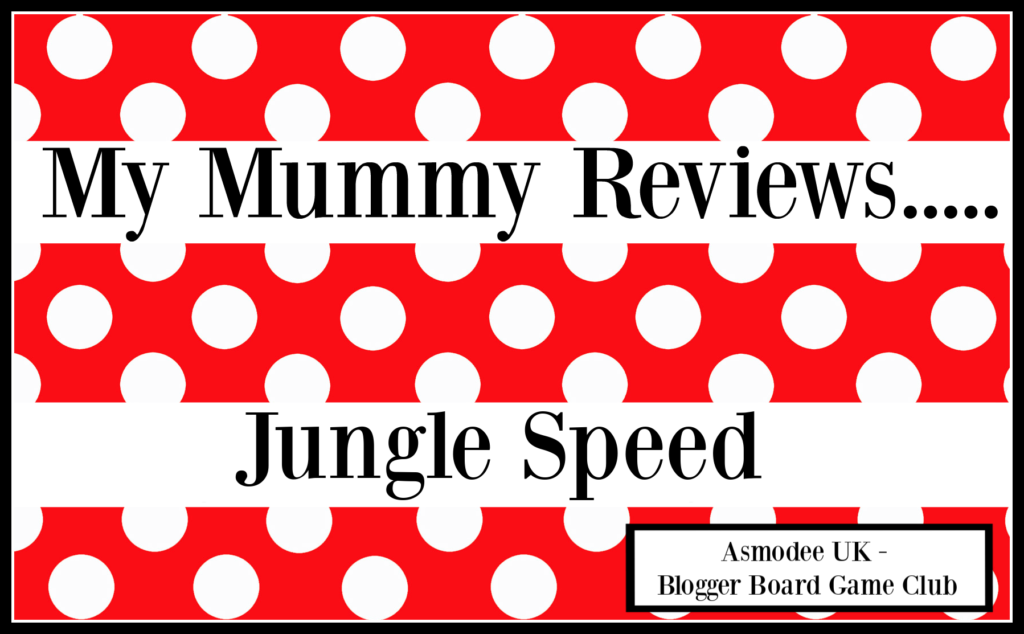 I’m part of the  Asmodee UK Blogger Board Game Club and recently I was gifted the game ‘Jungle Speed‘ in exchange for an honest review. In case you’re not aware, Asmodee UK is an established distributor of games, collectables and toys – both domestically and across Europe.

When the opportunity came about to be part of the Asmodee UK Blogger Board Game Club (organised by Playtime PR) I jumped at the chance! I was given the chance to select 3 board games from a huge list they supplied me with and then fingers crossed I would get my choices sent to me. Guess what, I did! 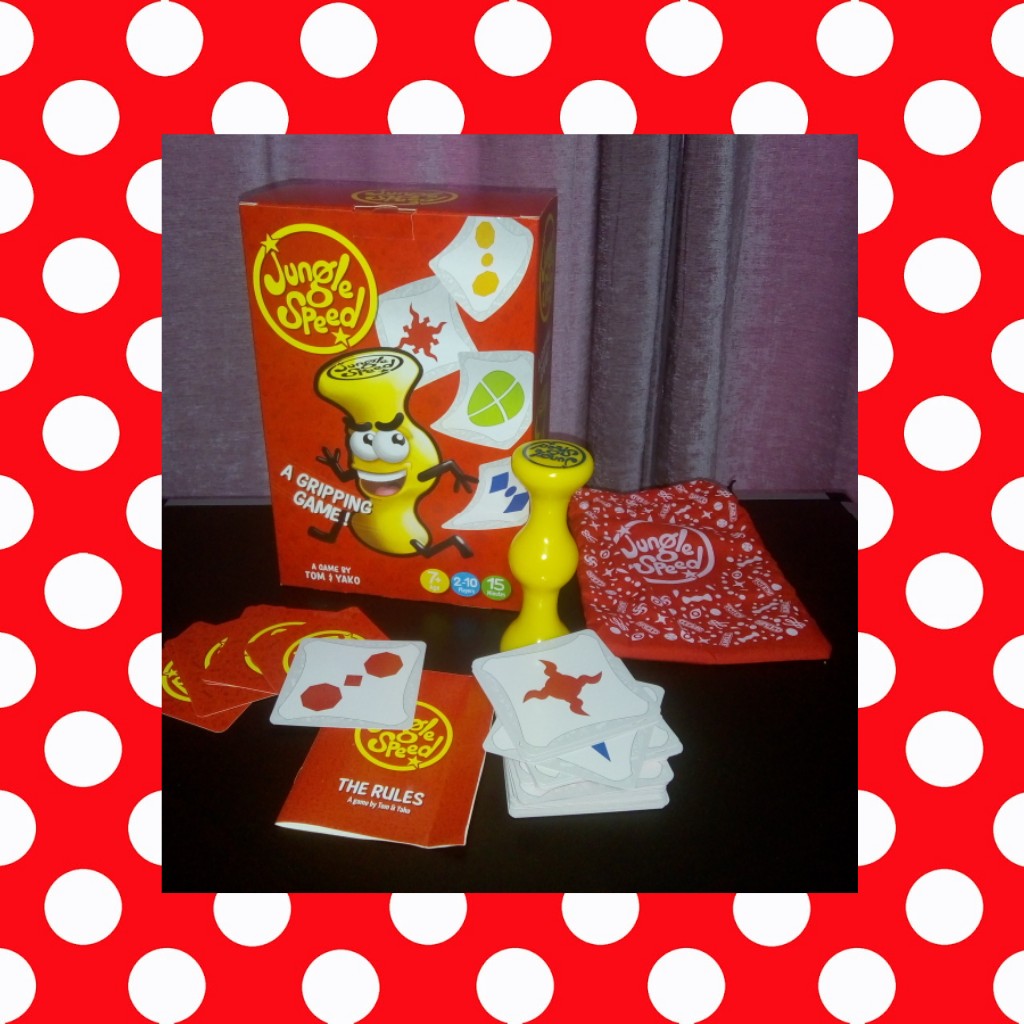 The Asmodee website description for the ‘Jungle Speed‘ is as follows :

“In Jungle Speed, you must rely on your keen sense of observation and quick reflexes. It requires a steady hand — which can be hard to maintain during the many fits of laughter! The Totem sits in the middle of the table, waiting for the player with the fastest reflexes to snatch it up and win the game. Each player is dealt a hand of cards. In order to win you must be the first player to get rid of all of your cards. Each turn, all of the players reveal one of their cards. If two cards are identical, those players must make a grab for the Totem. The faster player then gives their cards to their unfortunate adversary. To add to the difficulty, certain cards are almost identical, which can trick a hapless player into grabbing the Totem by mistake — a grave error. Other cards force all players to make a grab at once, change the method of play, or otherwise add to the difficulty.”

The game comes with a very simple instruction book and the rules are quite easy to follow. It’s a bit like a much more active version of snap (but with design cards rather than cards with suits) and instead of saying ‘snap’ you have to grab the plastic totem pole from the middle of the table to declare that you’ve seen a ‘pair’.

My Mum who is in her 60s and my daughter who is nearly 10 had such a laugh playing this game. They both got really competitive and I tried to get a video of them but all you could see was flying hands trying to grab the totem pole and loud laughing! 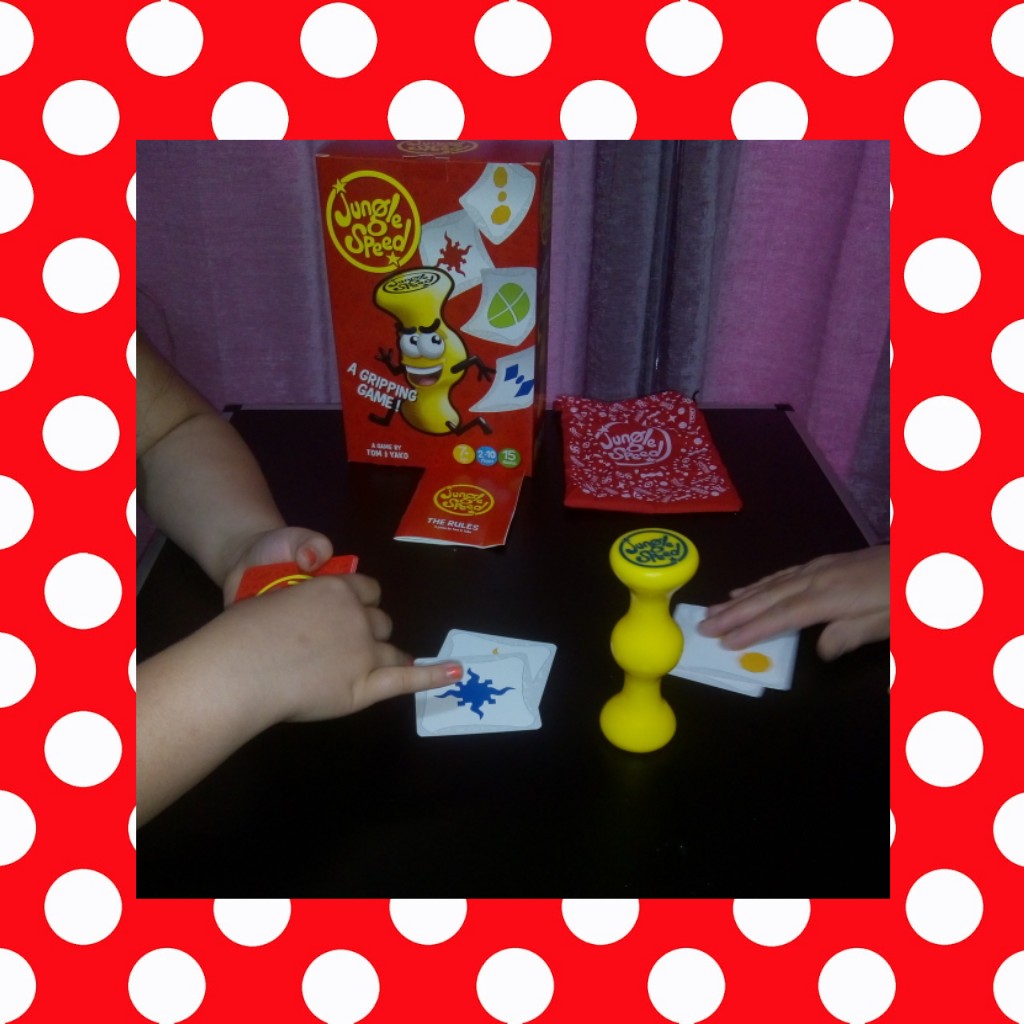 One of the many things that I LOVED about this game is that although it came in a big box – the main components fit into a drawstring bag that comes inside the box. This means I have been able to bin the outer box and just keep the game in the drawstring bag. All the items fit in the bag – the cards, the totem pole and the instruction leaflet. This is the perfect size game to take on holidays as it only takes up a small amount of packing space plus it is a varied and fun game that will make everyone happy. Others things we loved are: It makes you laugh, it could kind of be considered as a form of ‘mindfulness’ or ‘laughter therapy’ as you can’t focus on what else is going on in your life when you are playing this  – you are just thinking about grabbing that totem pole!, it is easy to learn how to play, it can be played by people of all ages and whoever plays is fairly equal as it’s it’s to do with speed and observation rather than knowledge etc , it can be played by a big group of people and most importantly…. it’s fun!

The game is designed for 2 – 10 players…..we have only played with 2 players so far but we have watched videos of more people playing iti and it looks like such a laugh! Check out this ‘Skip The Rule Book’ video below >>

If you are playing Jungle Speed I would say to remind people to not squeeze the totem pole too hard when grabbing it as you don’t want to damage it. Some past sets of Jungle Speed used to come with wooden totem poles which although they couldn’t get damaged from squeezing I am sure they may have done more damage if they accidentally went flying off the table! Personally I am happy witht the new plastic totem pole being in the set.  Also, for the purposes of ‘health and safety’ …… either cut your fingernails before playing the game or warn people that they could get poked with fingernails when grabbing for the totem pole! Basically whenever someone sees a card match on people’s cards they need to grab the totem pole and this means it’s very quick fire so more than one person can try to grab the pole at the same time which can lead to nails getting jabbed into curled fingers when going for the totem pole. In our house this added to the fun and ‘danger’ of the game. LOL!! But that may not be the case in your house….depends who is playing really.

Check out this ‘OnTableTop’ video to see the ultimate challenge….. Playing Jungle Speed with false nails on! 🙂

The price of ‘Jungle Speed‘ varies from retailer to retailer however you can currently purchase it at www.365games.co.uk for £13.99. The link to buy it from them is here >> www.365games.co.uk/party-and-family-board-games/jungle-speed-2018-board-game.  As  is always the way, you may be able to find it cheaper elsewhere but you’d need to do some googling to find out the best price.

There is also the option to buy a ‘Jungle Speed’ Expansion’ pack for £8.62 (price correct at time of publishing) from Zatu games (www.board-game.co.uk/product/jungle-speed-expansion/) and that will further expand the amount of card designs in the game. I have seen a video online of that pack being played with by a group of adults and it looks fantastic! I haven’t shared it here as there was some occasional swearing in it because the extra game cards and rules really added to the complexity of the game. Looks like great fun! We will definitely be purchasing the expansion pack at some point.

So in conclusion – this is a super game that the whole family will love. It’s an affordable price and you wil get many years of fun out of playing it plus it can be played by a bigger group of people so is ideal for Christmas and birthday get-togethers and family holidays etc.

As I stated earlier on in this review, I was gifted the ‘Jungle Speed’ game as part of the Asmodee UK Blogger Board Game Club but this was in return for me sharing with you all my honest thoughts about the game. Thank you so much Asmodee for sending this to us to play and review. 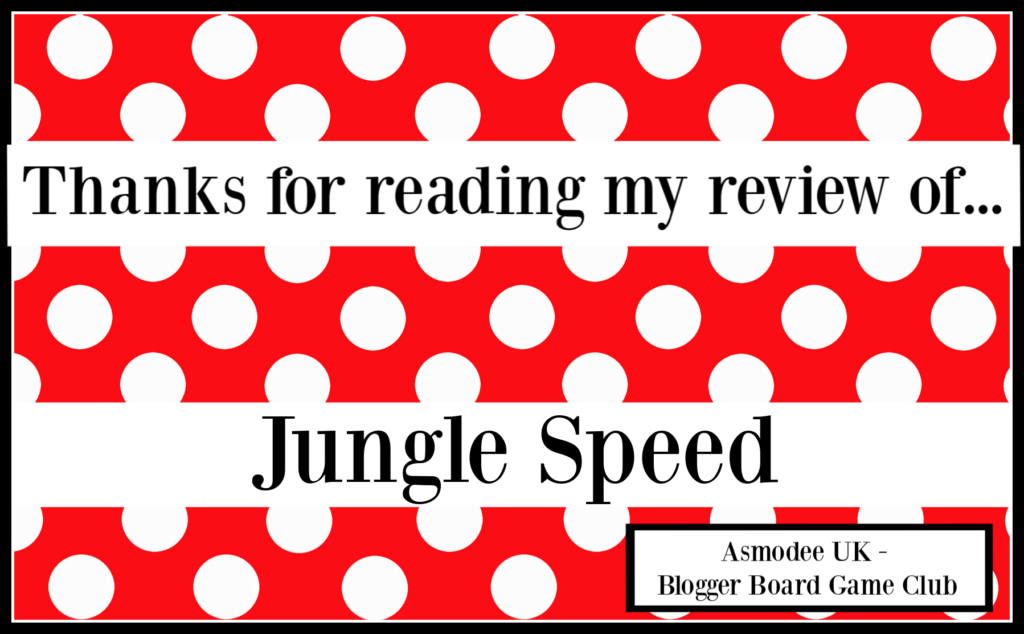