I’m part of the  Asmodee UK Blogger Board Game Club and recently I was gifted the ‘Just One‘ game in exchange for an honest review. In case you’re not aware, Asmodee UK is an established distributor of games, collectables and toys – both domestically and across Europe.

When the opportunity came about to be part of the Asmodee UK Blogger Board Game Club (organised by Playtime PR) I jumped at the chance! I was given the chance to select  board games from a huge list they supplied me with and then fingers crossed I would get my choices sent to me. Guess what, I did! For today’s review I am writing about the game ‘Just One‘ by Ludovic Roudy & Bruno Sautter and published by Repos Production.

The game recently won the 2019 Spiel des Jahres award and was recently shortlisted as a contender for the ‘Imagination Gaming 2019 Best Literacy Game Award‘. You can see their web page about it here >> https://imaginationgaming.co.uk/igawards-game/just-one.

The ‘Imagination Gaming‘ website describes the game as follows:

“Just One is a cooperative party game in which you play together to discover as many mystery words as possible. Find the best clue to help your teammate. Be unique, as all identical clues will be cancelled! A complete game is played over 13 cards. The goal is to get a score as close to 13 as possible. In case of a right answer, the players score 1 point. In case of wrong answer, they lose the current card as well as the top card of the deck. Thus losing 2 points. In case of lack of answer, the players only lose the current card, and therefore only 1 point. In this game you will have to find a new way to describe a word in one different word. The obvious word isn’t always the better choice. You will have to work on your vocabulary skills, especially on your synonyms. You have to find the right moment to give an obvious clue word. Sometimes it’s better to think differently but not too differently because the guesser needs to understand your clue.”

The Just One game is available to buy from various retailers – both online and in store. At the time of writing this review Zatu games have the ‘Just One‘ game available to buy for just £12.99 instead of the RRP of £17.99. Click here to order >> board-game.co.uk/product/just-one/ 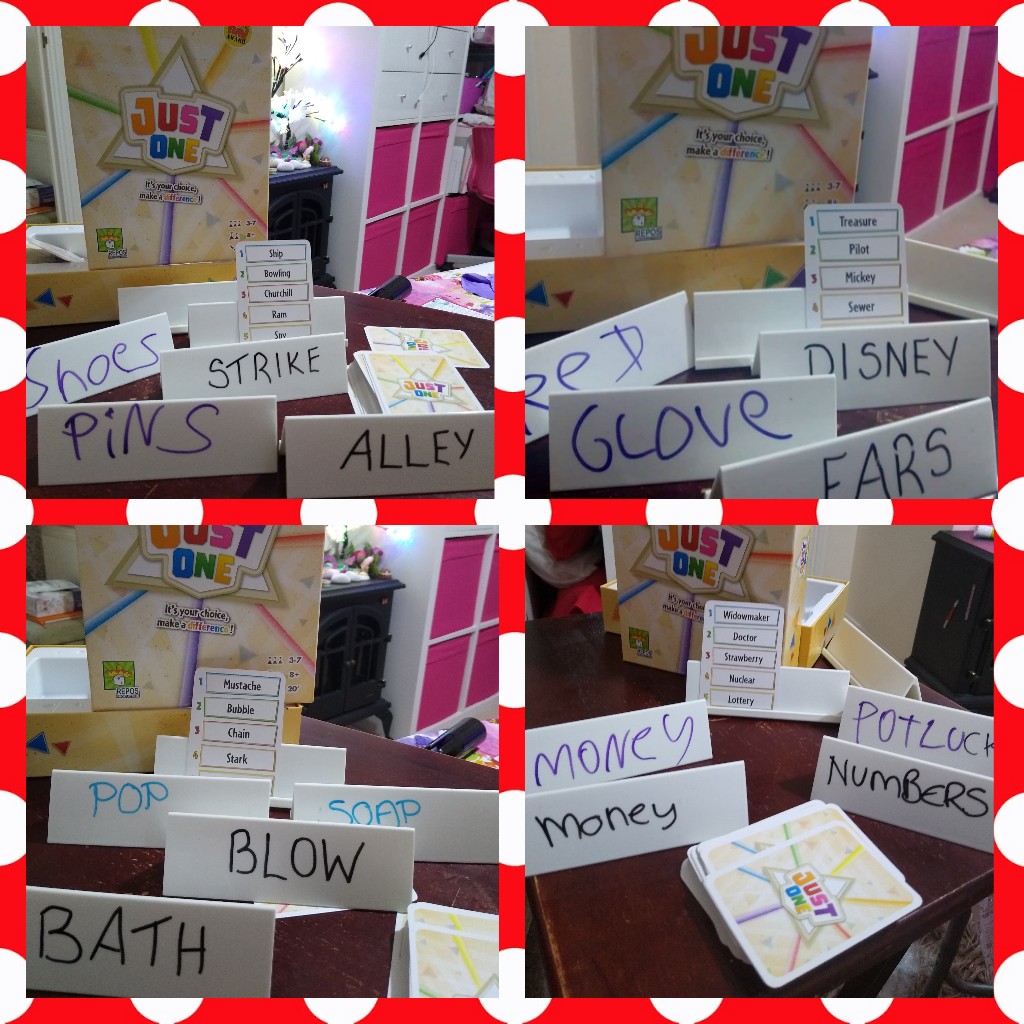 The ‘Just One‘ game comes in a colourful box and it does look appealing but if I’m honest the description on the front doesn’t really tell me much about that game. It just says “It’s Your Choice, make a difference“. To be honest, if I was looking at this game box on the shelf in a board game shop I wouldn’t immediately be drawn to pick it up because it doesn’t really tell me what the game is about from the front,however….. if I did pick the game up and then read the back of the box I would be much more interested in purchasing it as it goes into more detail about the game. The old adage is ‘Don’t judge a book by it’s cover’ and it’s apparent that the same goes for board games! 🙂 So basically, in my own words, here’s how you play the ‘Just One‘ game  >>

Please note that you can see the original instruction sheet by clicking here. We’ve played the game once so far but we already look forward to playing again. We played it when one on my friends came round for the evening and we had a real laugh. Once you get the hang of the game it’s really simple to play and lots of fun. The main thing is to make sure that your clue is not the obvious one because if it is then chances are that another player will have also written it down which means it will then be eliminated and make it harder for the active player to guess the mystery word.

As it’s meant to be a party game you can have from 3 – 7 players but as there’s only me and my daughter on a day-to-day basis we will have to change the rules a bit to play the game with just the two of us. It can easily be done – we just need to write more clues each to help the other person guess the word on the card – no there won’t be any eliminating of cards etc but it will still be an enjoyable game to play together. I’m not surprised at all that this won the 2019 Spiel des Jahres award and that Imagination gaming thought this was a great game to help children with their Literacy. I home educate my daughter and definitely agree that playing this game is a great way to get kids writing, using different words, reading and so much more. I will be the first to admit that my daughter made some spelling mistakes in this game when writing down her clues but the point is that, personally, I don’t think that matters. Her clues were legible and by her making a spelling mistake it gave us an opportunity to discuss the correct spelling and then she can improve for next time. That’s what Home Ed is all about – it’s about making learning fun! She’s not being tested on her spelling in this game – she is having fun and learning at the same time. Perfect!

I would like to say a big thank you to Asmodee for kindly gifting us this copy of Just One to review on my blog as part of their Asmodee UK Blogger Board Game Club.  If you would like to purchase the game please click here to be taken to the Zatu Games website to buy your copy or alternatively do a quick google search to find a different retailer (please note that none of the links in this review are affiliate links).