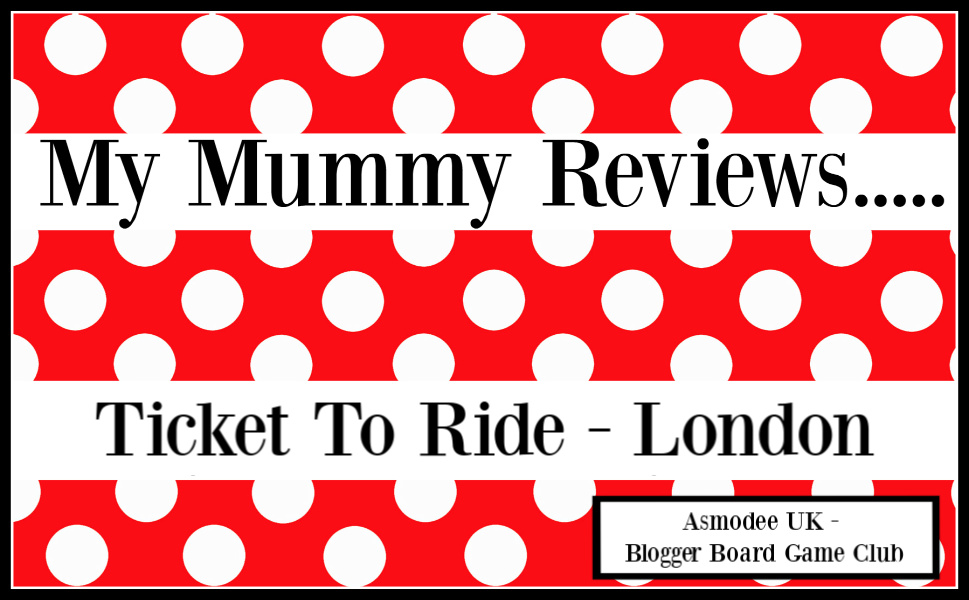 I’m part of the Asmodee UK Blogger Board Game Club and recently I was gifted the ‘Ticket to Ride London‘ board game in exchange for an honest review. In case you’re not aware, Asmodee UK is an established distributor of games, collectables and toys – both domestically and across Europe.

Back in May 2019, when the opportunity first came about to be part of the Asmodee UK Blogger Board Game Club (organised by Playtime PR) I jumped at the chance to try out some of their games! I was given the opportunity to select board games from a huge list they supplied me with and then fingers crossed I would get my choices sent out to review. Guess what, I did! 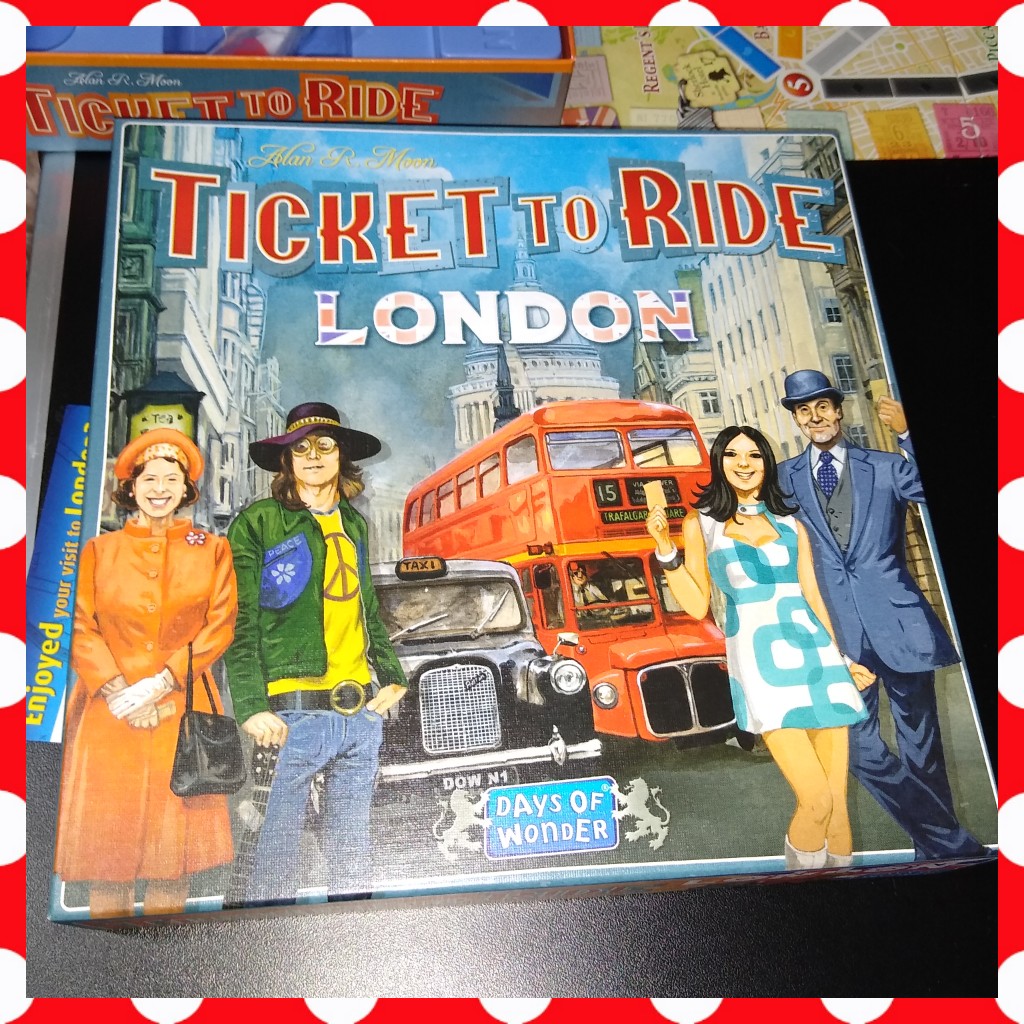 I love being part of Asmodee UK’s Blogger Board Game Club as it means we are gifted loads of great games to try out. One of my best friends also loves playing games as much as me and my daughter so we regularly spend hours playing board games together. Me and my friend have been playing Scrabble together for over 20 years!! We still love that game but it is so nice for Asmodee UK to give us this opportunity to discover new favourites!

For today’s review I am writing about the new game ‘Ticket to Ride London‘ published by Days of Wonder.  This game was launched in June 2019 and it’s basically a scaled down version of the original Ticket to Ride game but this new version has a different setting for the map (London) and rather than playing with Trains as your game pieces (like in a lot of the Ticket to Ride games) – you instead play with double decker buses!

Here is Asmodee’s description of ‘Ticket to Ride London’ >>

‘Welcome to the ’70s world capital of fashion and music. Jump aboard a famous double-decker bus to rumble through London’s historic streets, breeze past Buckingham Palace, pop into the British Museum or listen to Big Ben’s chime echo across the Thames… In this fast-paced Ticket to Ride game, players race one another to claim the most important bus lines and complete their Destination Tickets, connecting Districts in the capital of the United Kingdom. The elegantly simple gameplay of this stand-alone version of Ticket to Ride is ideal for both beginners and seasoned players.‘

I’ve not yet reviewed the original ‘Ticket to Ride‘ game however I have reviewed ‘Ticket to Ride – Europe‘ which is part of the same series and I can see for myself how well this new ‘London’ version of the game fits into the Ticket to Ride family.  It plays mostly the same as the Ticket to Ride Europe game apart from there are a few slight changes to game play. This has some different (but easy to understand) rules, this is for 2 – 4 players whereas the Europe version is for 2-5 players, you have less game pieces (buses – not trains like in the other games) in comparison to the other game versions (which means you complete shorter journeys across the map) and this map is much smaller than other versions of the game which means it has a lot shorter game play and also it’s more difficult to complete journeys on the map because when someone else’s playing piece blocks your path it is more difficult to find an alternative route to get to your destination and complete your journey and score points. In the larger scale maps (such as Europe) you have more opportunity to plan out an alternative route if someone encroaches on your path and because you have more playing pieces you can then implement your well thought out plan. In this shorter game play version you don’t have as much opportunity to do that – but that explains why it takes less time to play and complete the game. 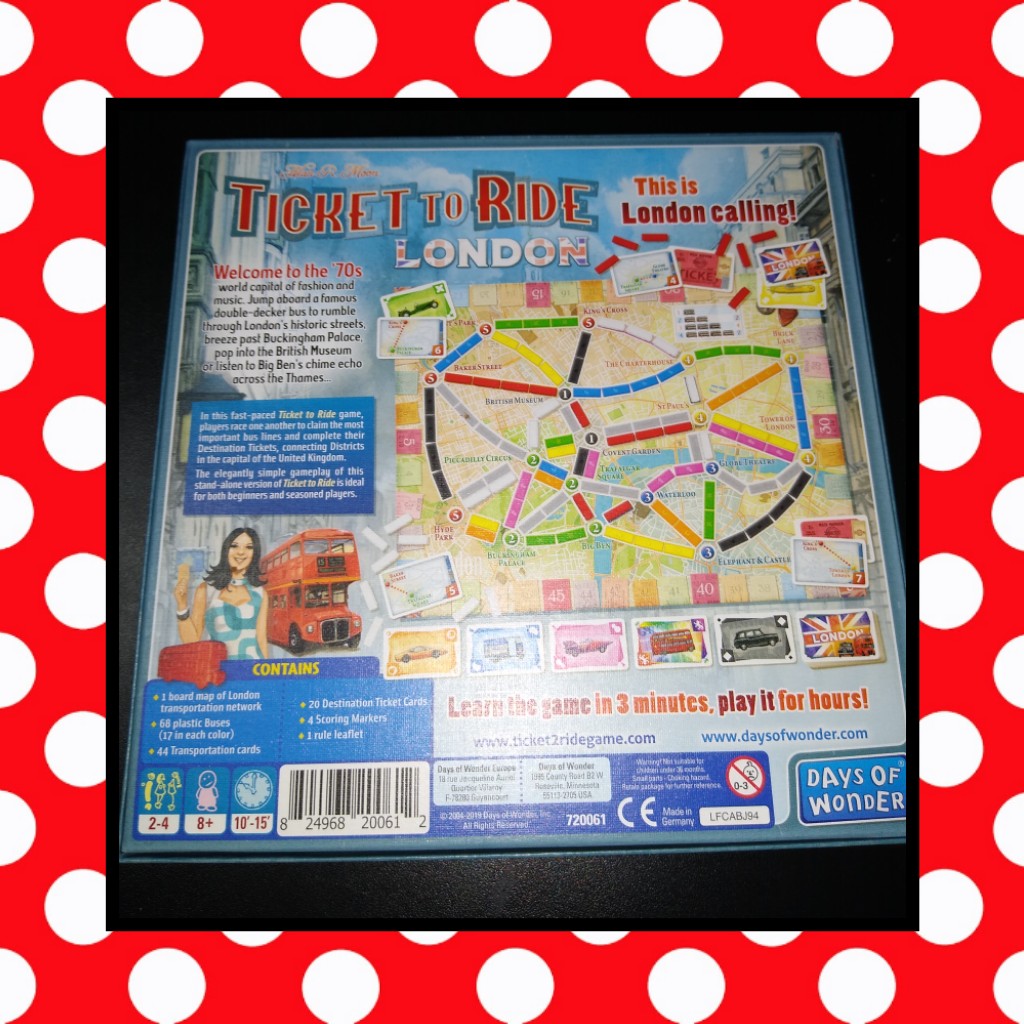 The benefit of the shorter game play is that it means this is a good game to play if you only have a limited amount of time to spend board gaming or if the child/ friend you are playing with doesn’t enjoy spending too long playing one game. Also if you or the person you are playing with is a beginner to this series of ‘Ticket to Ride’ games this is most definitely a fantastic introduction to the principle of the ‘Ticket to Ride’ brand and one that eases you into the premise of the game in a much simpler way than say ‘Ticket to Ride – Europe’. 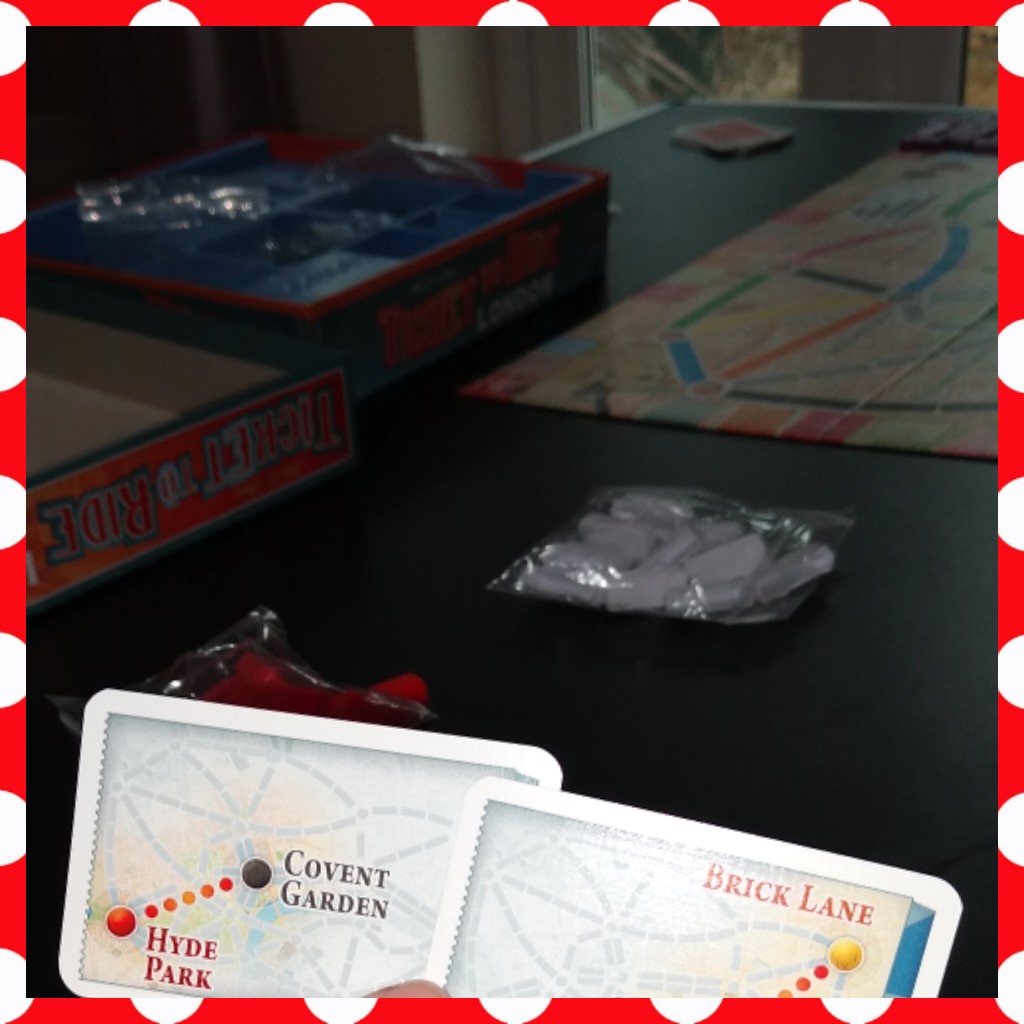 Our first foray into these games was with the ‘Europe’ version for a review and me and my daughter tried on a few occasions to play the game but we just couldn’t get our head around the instructions and even the instructional videos on You Tube. We ended up waiting for my friend to come round one day to teach us and as soon as we understood what we had to do we were well away! Once you know how to play these games they really are so simple – it just takes some time to learn the instructions. This is why if we’d had this new ‘London’ version first I can imagine it would have been much easier to get to grips with how to play the game in the first instance. Having said that, just because this game is easier to play and learn doesn’t necessarily mean that it’s more fun to play – it really depends on what you are looking for in a board game. 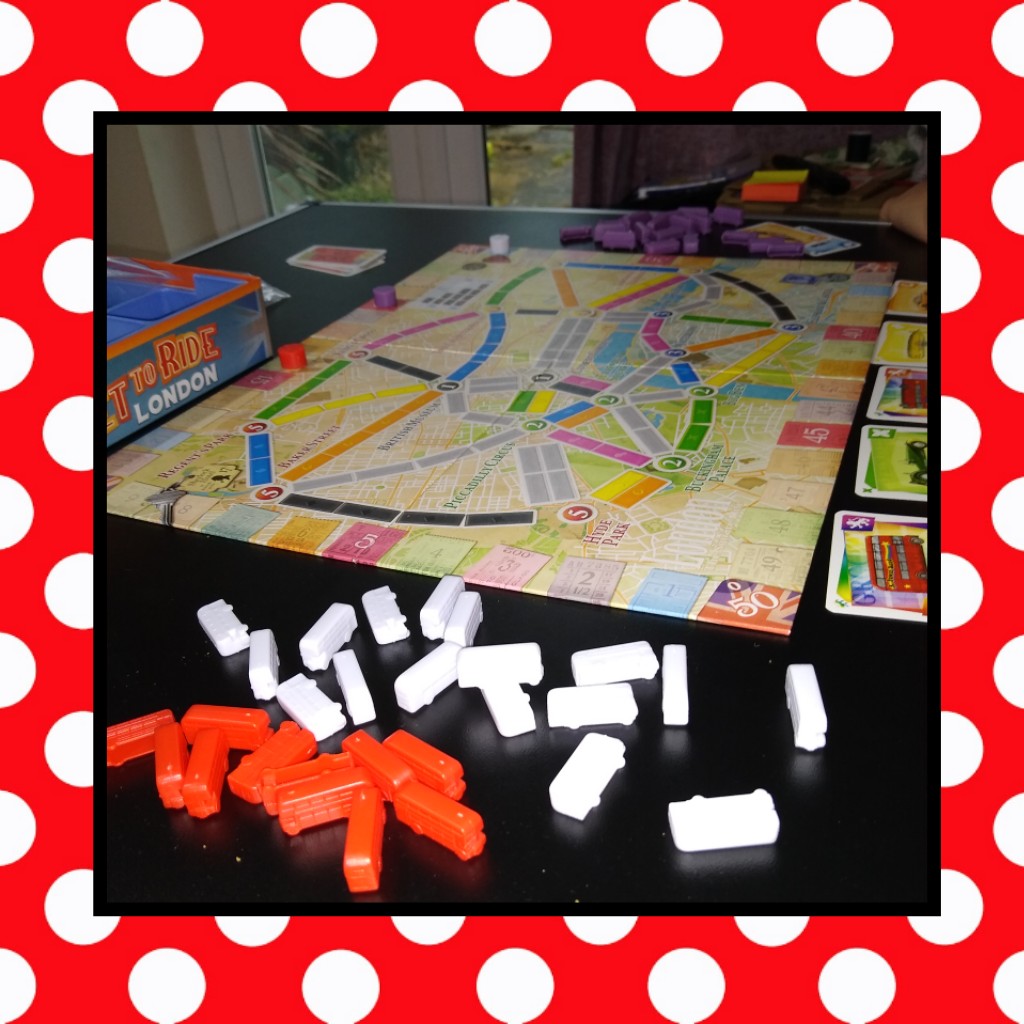 Personally we have all decided that, if given a choice, we prefer to play the longer game play version of the game rather than this shorter version but that is solely because we know what we are missing in comparison to the other TTR game when we play this scaled-down version. However, I’m saying this from the point of view that we already know how to play the usual ‘Ticket to Ride style’ games so therefore we are in a position to judge how this board game is different from others in the range

The longer version TTR games allow for more strategy, more planning, more fun, higher scores and more suspense (waiting to see if you can complete your planned journeys on the map). That’s not to say that we don’t like this new ‘Ticket to Ride London’ game – we really do! It’s just if given a choice of which one to play on a wet rainy afternoon when we are stuck in the house then we would definitely opt for the Ticket to Ride Europe version as we know it will take longer to play and we can get a bit more competitive. 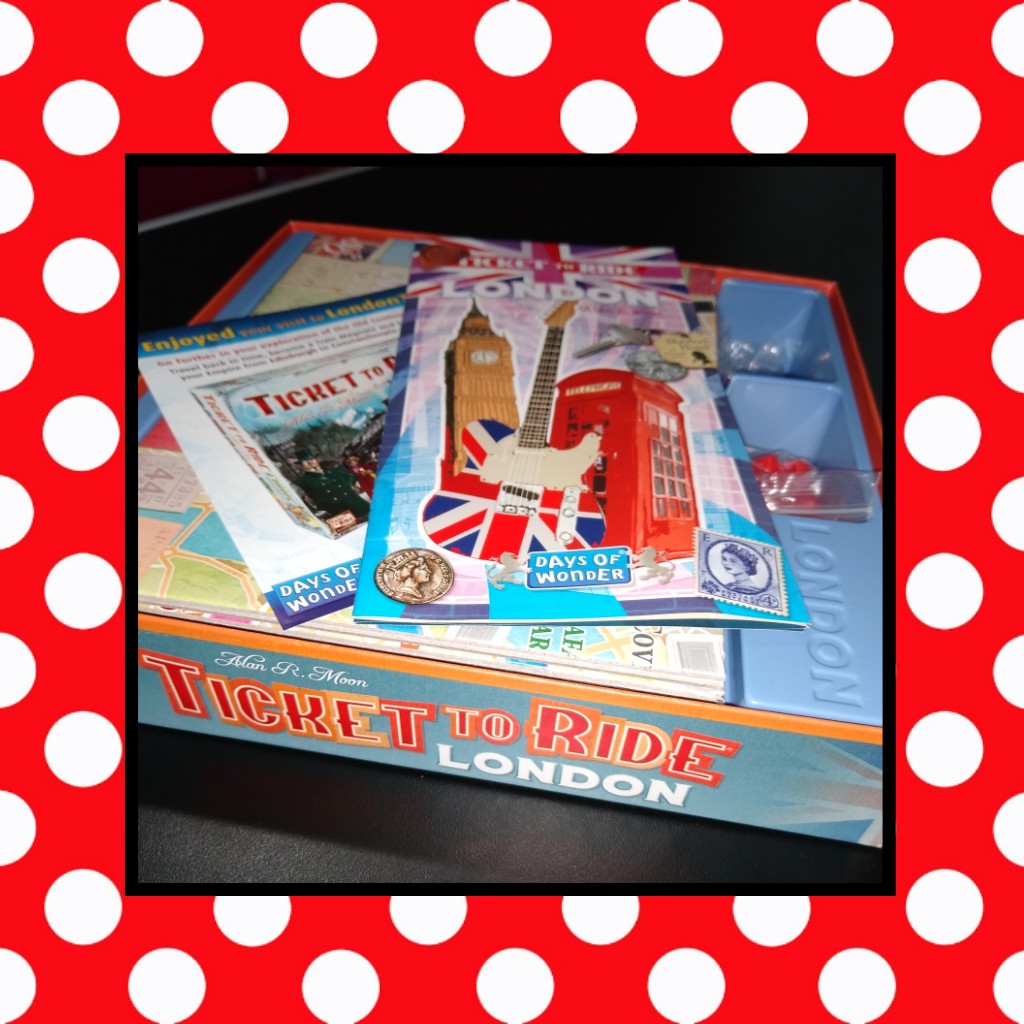 In conclusion, the ‘Ticket to Ride London‘ game is an excellent introduction into the world of the ‘Ticket to Ride’ games which means it’s ideal for kids and beginners plus because this version takes a lot less time to play it is also fantastic for Ticket to Ride fans who just want a quick game to play rather than a long game. We loved the London setting of the map and we found that the box, instructions, game cards and playing pieces are all made to a very high standard. As with the other TTR games – this board game is made to last and we think it deserves to be played often and treasured for years to come. Also this version of the game is roughly £10 cheaper to buy than the Europe version so it’s a cheaper way to start playing this globally successful series of games.

Ticket to Ride London is available to buy from various retailers – both online and in store. At the time of writing this review Zatu games have the game available to buy for just £13.86 instead of the RRP of £19.99. Click here to order >> board-game.co.uk/product/ticket-to-ride-london/

This Ticket to Ride London board game is well worth adding to your collection of board games ready for Christmas. It would also be perfect to buy as a gift for someone. The game is designed for those age 8+ years.

I would like to say a big thank you to Asmodee for kindly gifting us this copy of Ticket to Ride London to review on my blog as part of their Asmodee UK Blogger Board Game Club.  If you would like to purchase the game please click here to be taken to the Zatu Games website to buy your copy or alternatively do a quick google search to find a different retailer (please note that none of the links in this review are affiliate links). 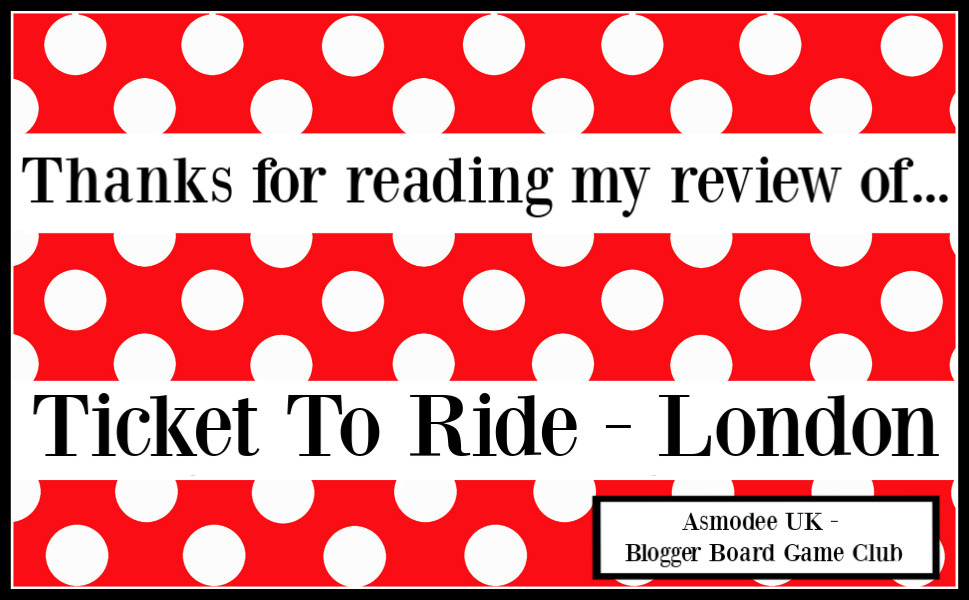