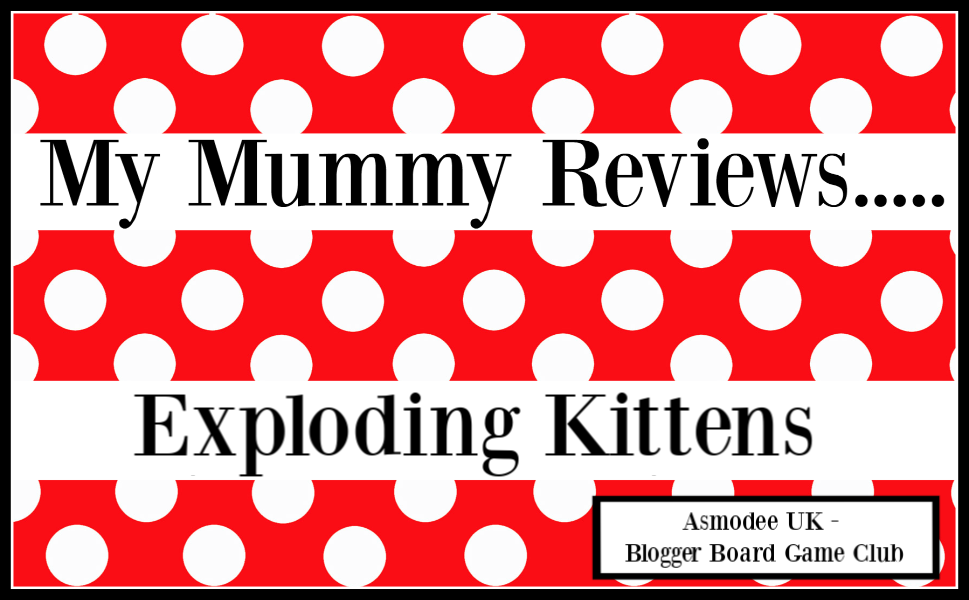 I’m part of the Asmodee UK Blogger Board Game Club and at the beginning of the year I was gifted ‘Exploding Kittens‘ the original card game in exchange for an honest review. In case you’re not aware, Asmodee UK is an established distributor of games, collectables and toys – both domestically and across Europe.

Back in May 2019, when the opportunity first came about to be part of the Asmodee UK Blogger Board Game Club (organised by Playtime PR) I jumped at the chance to try out some of their games! I was given the opportunity to select board games from a huge list they supplied me with and then fingers crossed I would get my choices sent out to review. Guess what, I did! 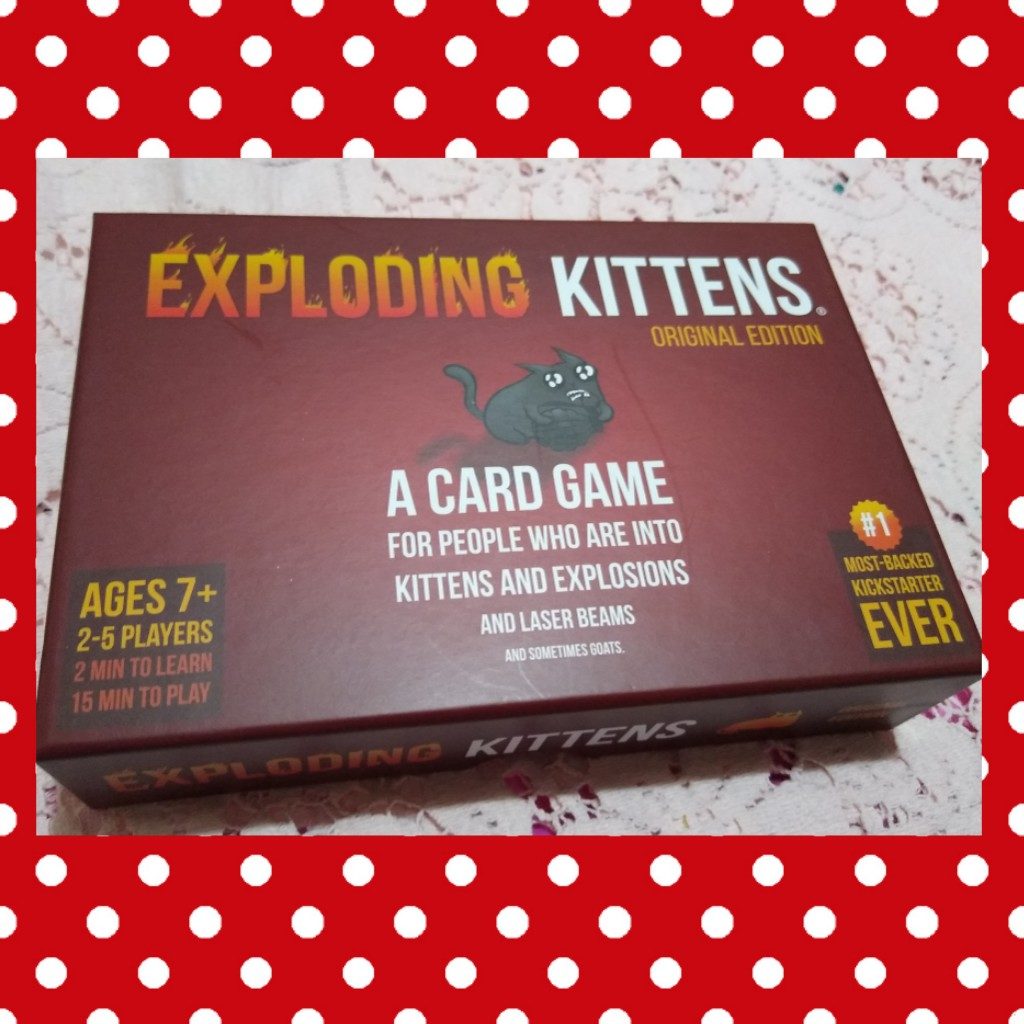 As a keen board game lover I adore being part of Asmodee UK’s Blogger Board Game Club as it means we are gifted loads of great games to try out. My 10 year old daughter and I both love playing games so this collaboration with Asmodee is perfect for us!

For today’s review I am writing about a card game called ‘Exploding Kittens‘. According to Wikipedia, ‘Exploding Kittens is a card game designed by Elan Lee, Matthew Inman from the comics site The Oatmeal, and Shane Small. Originally proposed as a Kickstarter project seeking US$10,000 in crowdfunding, it exceeded the goal in eight minutes and on January 27, 2015, seven days after opening, it passed 103,000 backers setting the record for the most backers in Kickstarter history.‘ 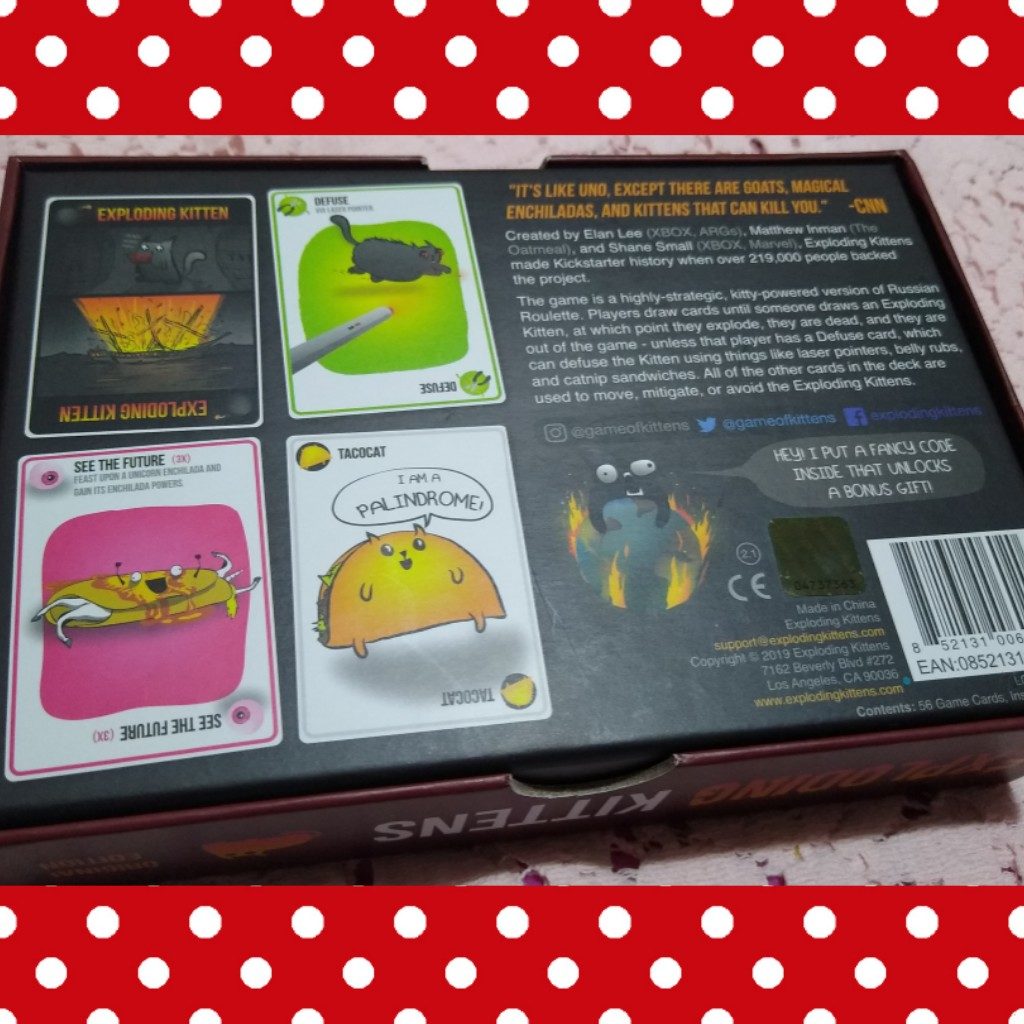 I’d seen this card game in the shops but naively I had looked at the packaging and thought that it didn’t look like it would be the kind of game my daughter would want to play (I am so sorry Exploding Kittens! I mean that in the politest way possible but the packaging just made the game look like it was more suited to adults with a sense of humour than kids). Anyway, guess what?…..I was so wrong. Turns out you mustn’t judge a game by its box! This game is awesome!

When I received confirmation that I had been selected to take part in the next wave of the Asmodee Blogger Board Game Club they sent out a list of games for me to pick from and on that list was ‘Exploding Kittens‘ and even though I had overlooked the game in the shops it had really stuck in my head because of the name and the fact I had kept seeing it in all the shops over Christmas and I thought….I’ll give it a go! Turns out it was one of the best game  choices we’ve made so far!

The video above explains how to play the Exploding Kittens game. It is so easy to learn but still interesting enough to hold the interest of adults and children alike, game after game.

** How it works **
You put the cards on the table and take turns drawing from them.

You play a defuse card, which will stop the kitten from exploding using things like laser pointers, kitten yoga, and catnip sandwiches.

Play various cards to skip your turn, attack other players, peek at the deck, or secretly relocate an exploding kitten card.

Relocating an exploding kitten to a new location in the deck lets you form complex, fun, and cruel strategies against other players.

You can play cat cards, which are different from kitten cards. Cat cards activate special powers.

The video below shows a sample round of the game being played.

To be very honest when I read those instructions I kind of  got a bit confused and also I didn’t feel they conveyed how much fun the game was…..because after playing the game numerous times I can now vouch for the fact that it really is! It’s so simple to learn, easy to play and lots of fun plus you can be sneaky and strategic….perfect!

CNN described it like this….. ‘It’s like UNO, except there are goats, magical enchiladas and kittens that can kill you.‘ 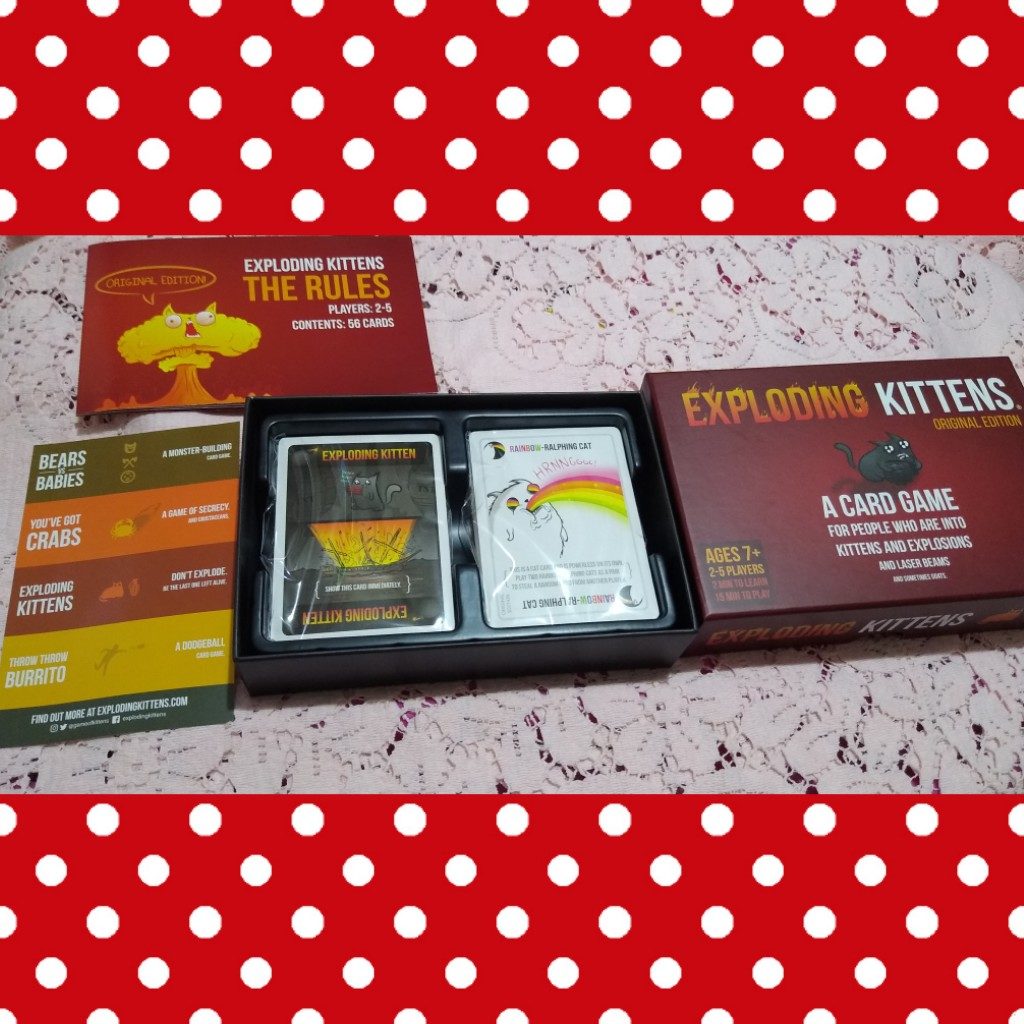 My daughter and I gave this a quick go when it first arrived, with the intention of just playing it once as I had a busy day ahead and lots to do, and instead we ended up playing it about 4 or 5 times in a row!  After reading the instruction leaflet from inside the box, she understood the rules really quickly and so did I and then we set about having a go at playing it. The more we played it the more sneakier my daughter got at what cards she decided to keep in her hand, discard or play and that is what made the game so much more fun each time. 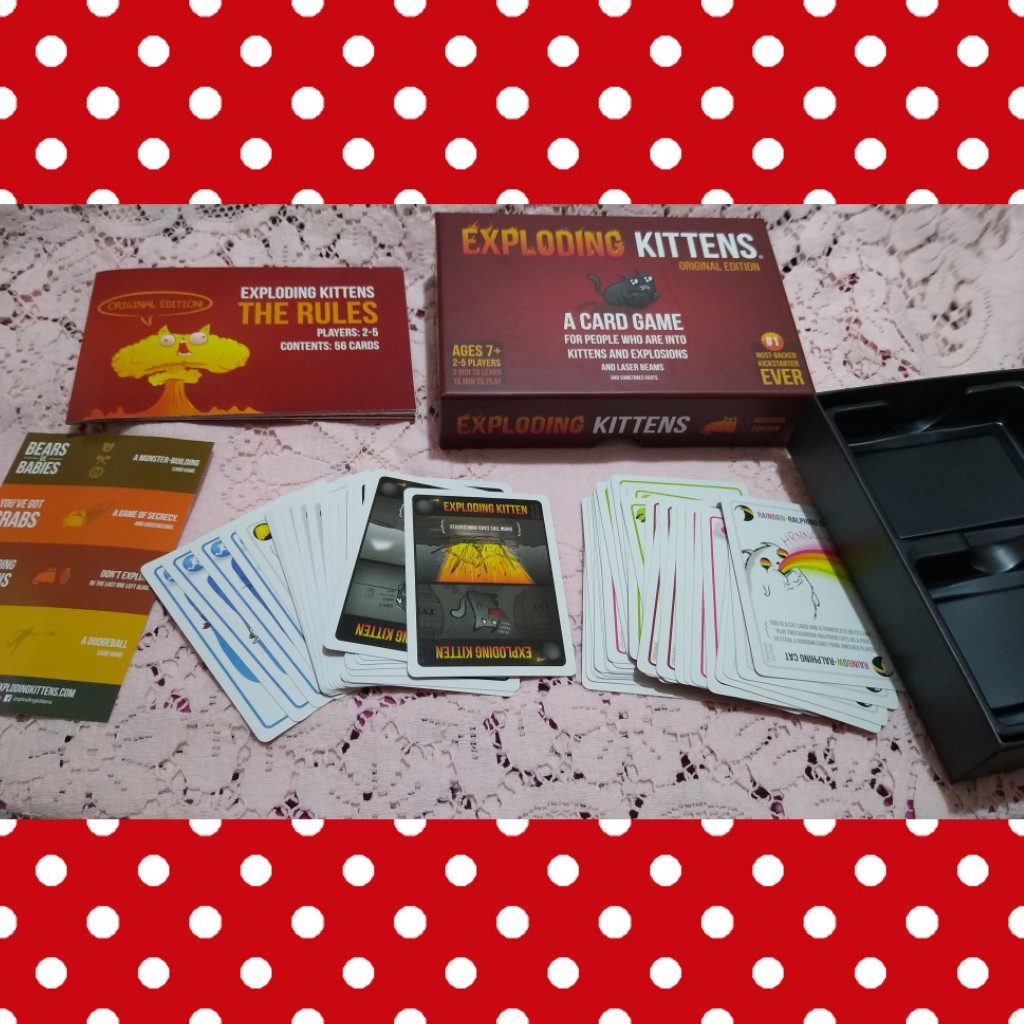 My daughter has also played this with my sister who is in her 20s and she also loved it. My daughter basically taught my sister the rules and I just went over it with her to check she had understood the instructions okay and then off they went…..game after game after game! My sister LOVED the game, my daughter LOVED that my sister LOVED the game and I LOVED that they both were enjoying the game so much. Nothing beats the thrill of a good card or board game and it’s lovely that this game has been such a hit in the ‘My Mummy Reviews’ family. 🙂 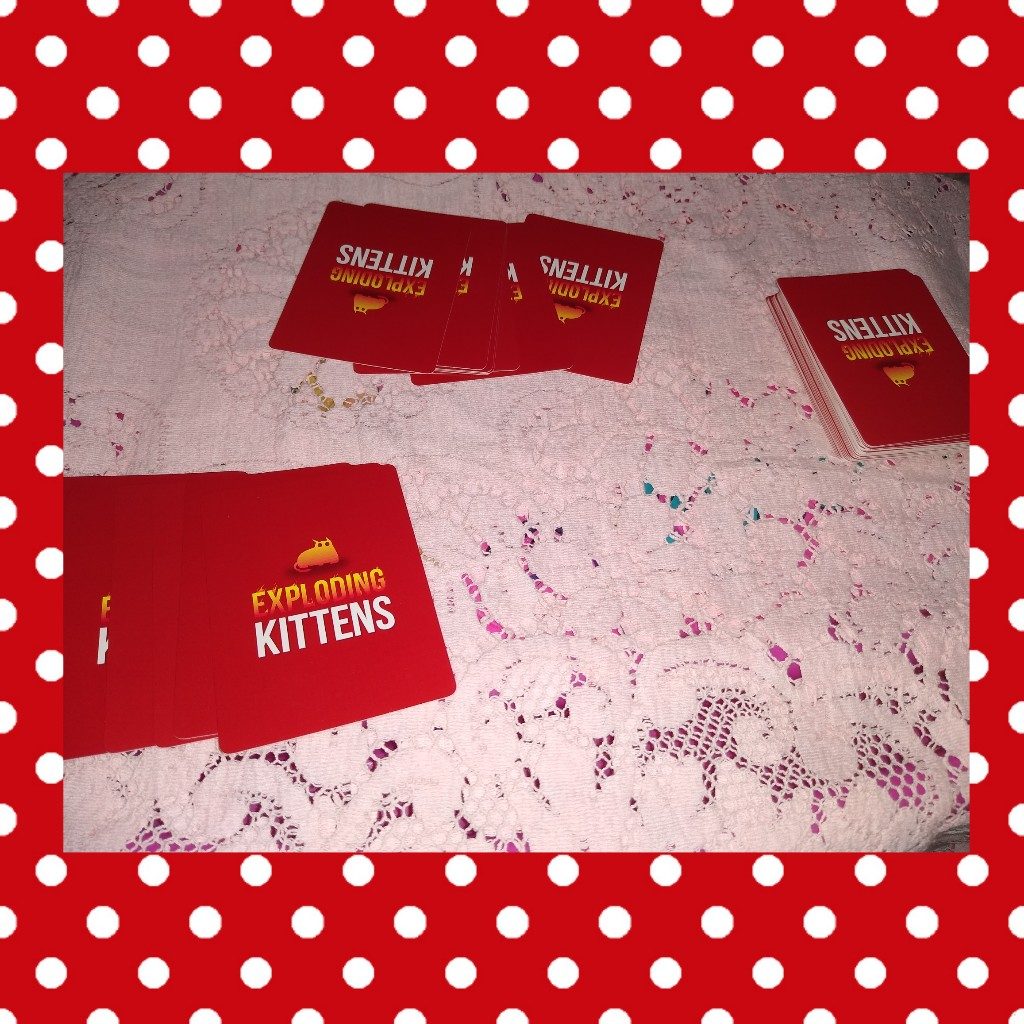 Exploding Kittens has an RRP of £19.99 and it’s available to buy from various retailers – both online and in store. At the time of writing the cheapest I have found it for is £14.99 from the Dice & Decks website.

On first opening the box and seeing what is basically a deck of prettily decorated cat cards I did think to myself that it wasn’t worth £20 but after a couple of goes of playing it I could see exactly why people were paying this price for this game. It is so easy to take with you on your travels – it’s literally just a deck of cards that you could take out of the box and pop in your pocket (This means it’s great for taking on bus /car journeys – as long as you have somewhere to place your discard pile), it allows for you to play strategically (which is always great fun – Hahaha!), it can be played by 2 – 5 players ( so great for family game night), it’s quick to play (each round lasts between 10 and 20 minutes) and it’s something a bit different to the normal which is always exciting.

All in all it is a superb family game and one that I look forward to playing. We love all the illustrations on the cards and they are all unusual but child friendly …….although if you are looking for some that aren’t then they do an ‘Adult’ version which you can take a look at here >> Exploding Kittens Card Game – NSFW (Explicit)

Make sure to buy the game in the red box if you’re looking for the family version and not the black one which is designed for adults. 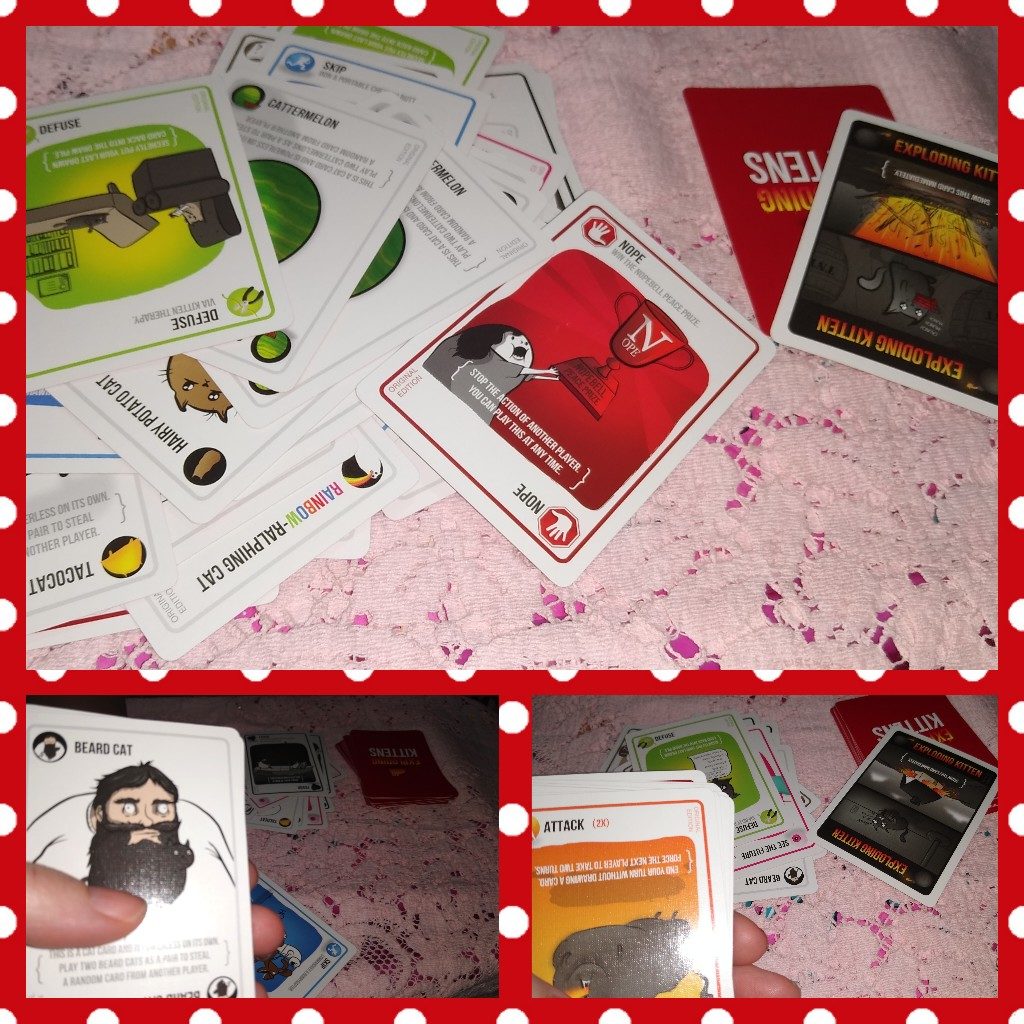 If you decide to purchase the Exploding Kittens game I hope you will have as much fun playing it as we have.  It will definitely be coming with us on our holidays in the future as it can easily be played in the caravan or in the clubhouse when we are waiting for an entertainment act to come on etc. We usually play Gin Rummy but this is much more fun!

I would like to say a big thank you to Asmodee for kindly gifting us this copy of Exploding Kittens to review on my blog as part of their Asmodee UK Blogger Board Game Club. 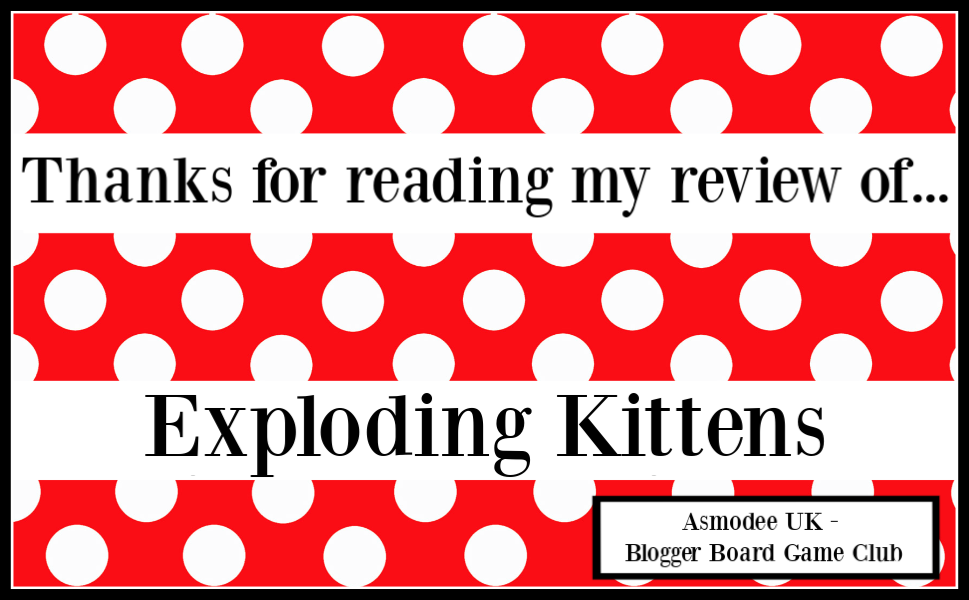